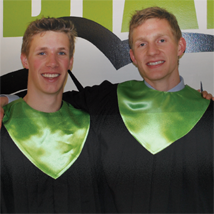 As they approached graduation in 2009, Fikowski looked to Lethbridge College to figure out what to do next.

“I went to the Lethbridge College career centre in grade 12 and spoke with Judy Frank, the chair of Counselling Services, about my future,” Fikowski says. “I took personality tests to see what sorts of careers would best suit me. Accounting came up and it interested me. After talking with professional accountants, they said the college was a better choice to start my post-secondary education because there was more hands-on knowledge, and it was an easier transition from high school.”

Fikowski talked to Hemmerling about his decision and it turned out Hemmerling had already decided to study business at Lethbridge College, a choice that meant the friends could stay together. Both were offered spots on the Kodiak Men’s Volleyball team by Coach Ian Bennett.

“Ian Bennett approached us near the end of our high school season and asked if we would come play at the college,” Hemmerling recalls. “I earned a scholarship to play for my two years there. I was drawn to the college because I had the potential to play post-secondary volleyball while still pursuing a degree in business, a strong interest of mine.”

Bennett remembers Fikowski and Hemmerling for their passion and dedication to improvement, agreeing with instructor feedback forms that requested to “clone them.”

“They always represented the program well with numerous volunteer activities inside and outside of the college,” recalls Bennett. “Their grades were exceptional. They were two of the most supportive teammates you could ever play with and their dedication to improvement paid off as they both played very significant roles in the team’s fifth place finish in 2011.”

While attending classes at Lethbridge College, Fikowski and Hemmerling took their love of volleyball to a new playing field – the beach.

“Beach volleyball is the greatest,” says Fikowski. “I have always loved indoor volleyball but beach is my true passion. When playing with Andy I always know what effort level he is giving, and his high level of play pushes me.”

Since graduating from Lethbridge College in 2011, both young men worked to save money for their next adventure together – continuing their education at Griffith University in Queensland, Australia.

“In my second year at Lethbridge College I started looking at my options after completing my diploma,” Fikowski says. “One of the transfer options was to Griffith University on the Gold Coast of Australia. Someone from AustraLearn did a presentation at the college on studying there and Andy and I both attended and were instantly ecstatic about the possibility.” The pair flew to Australia on Feb. 7, started classes at the end of the month, and are expecting to earn their accounting and business degrees by June 2013.

“We decided on Australia because of the opportunity Lethbridge College presented us with a transfer agreement between the two schools,” Hemmerling says. “The international experience would work well for us in our pursuit of accounting and business degrees. We also wanted to play competitive beach volleyball year round. Clearly in Canada, we only have about two months to play.”

Fikowski adds that he was attracted to studying abroad “because I had lived in Lethbridge for so long and wanted a change of scenery. The adventure of moving away and living on my own, meeting new people, was extremely appealing.”

Fikowski adds that he is looking forward to “the opportunity to try something completely different... I am 20-years-old with nothing holding me back, going to a foreign country with my best friend. I will get a very respectable educational degree out of it too. And it just so happens my favourite sport is beach volleyball, my best friend is my beach partner, and I am going to the best beach in Australia and one of the best beaches in the world,” says Fikowski.

“It is almost impossible to pinpoint what I am most excited about,” Hemmerling said before leaving on the trip. “I can’t wait to meet new people from all over the world.”