When the University of Lethbridge Pronghorns go on the road to competitions, where do they 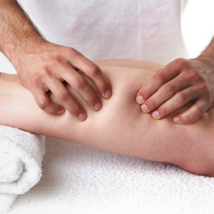 look for massage therapists to keep their athletes at their prime? Lethbridge College.

So when the school’s swim team headed to a Canada West competition in Vancouver this past winter, Alex Plett, second-year Massage Therapy program student from Rosemary, was at poolside. She did such a bang-up job on their banged-up swimmers that she was invited to accompany the team to the national finals in Calgary in February.

Taylor Quan, another second-year student, volunteered to take his skills on the road, a bus trip to Winnipeg with the U of L track and field team, also during reading week. The experience both students gleaned from the trips would have been huge.

Unfortunately, the team decided to fly to Winnipeg and didn’t have the budget to take Quan.

Massage Therapy students are required to put in athletic massage hours during their program.

Quan and Plett were both high school athletes who retain their love of sports, so linking up with the Pronghorns was a natural opportunity for them.

““It’s good that the college and the university have such a close relationship,” says Quan, a former football player for Lethbridge Collegiate Institute. “It creates great opportunities for us.”

In Vancouver, Plett found herself easing bicep tendonitis and muscle spasms during the meet. Quan expected, had he made it to Winnipeg, to find legs, backs and shoulders demanding his attention, (the basic track and field muscle groups).

Plett and Quan, like other students in the program, are capable of dealing with acute sprains and strains and hold CPR certificates. In short, the two-year program has given them well-rounded training in their field.

In addition, through practicum work at Lethbridge College, the students get assistance in building their client lists before they even graduate.

Quan, a lifelong Lethbridge resident, already knew of Lethbridge College’s program before leaving high school. As of March, he’s been working at Meridian, a Lethbridge physiotherapy centre. He intends to study performing arts and kinesiology at the U of L.

Plett is debating staying in Lethbridge or heading home, but knows she’ll be involved in some athletic program. She participated in soccer, basketball, volleyball, track and badminton in high school in Rosemary. She also did her homework.

“I did a lot of research on massage therapy programs and found Lethbridge College’s was one of the best in Alberta,” she says. Plus, coming from a small town, Lethbridge was an easier city to adapt to than Calgary.”