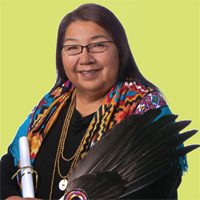 herself to learning and restoring her Blackfoot culture for future generations. At its convocation ceremonies this month, Lethbridge College will proudly bestow an honorary bachelor of applied arts on Hungry Wolf, one of its former students.

Wider Horizons: In Daughters of the Buffalo and The Ways of my Grandmothers, you describe the diminished role of women in the traditional Blackfoot family. How have things changed?

Beverly Hungry Wolf: The way I was raised was very differently than later generations. We had a traditional base of loving parents that was removed from European traditions. When I was five years old [1955], my mother worked at the boarding school and I went with her from 7 in the morning to 7 at night. I slept in a little house behind the school. When I went to boarding school full-time when I was in Grade 6, I missed out on not being around my family 24/7. It was a colossal loss. At home, we had strict rules. But we didn’t have meanness. We knew we were unconditionally loved. Today, parents are more European in their thoughts and behaviour. When I was 19, I went and studied the traditional ways of life.

WH: What convinced you to write about your traditions?

BHW: I was encouraged by the elders I spoke to. They said you have to write this down. I never intended to be a writer, but my grandparents encouraged me to do it. Some people have said “you can’t bring back the 1800s.” I’m not trying to; I’m just looking at the beauty of our traditional ways of life. I always wondered why we were told in boarding school that our ways were evil and our grandparents were going to hell. I loved my grandparents, so this was very hurtful to me. I wanted to know more about my heritage.

WH: What did you discover?

BHW: I had fun getting to know the old people and understanding the values they were raised with. They taught through humour. They would say “watch carefully; you’ll be told once.” It showed you clearly that if you were not paying attention, you were being disrespectful of the person teaching you. I hope that way of mothering is going to come back. I’m trying to teach it as much as possible so our children will have more options on ways to raise their children. In my day, you didn’t hit children; parents who did were looked down upon. People from the community would come and take that child away. Animals were used to teach respect for nature, but also to reprimand children: “See that bear; if you’re not good, he’ll come after you.” In each community, it was one person’s job to reprimand children, to scare the bejeepers out of them. I was told by my mother “see that man over there? He’s the man who will get after you if you misbehave. Go and give him this gift.” It taught us generosity, but also to confront face to face the person who would correct you if you misbehaved.

WH: You’re also an advocate for First Nations people. That must be frustrating at times.

BHW: Yes. I look at all the immigrants coming here to work and I wonder how come our people are not allowed to work. We’re educated, but we’re not able to get work in our own country. Employers don’t tap into that pool of available talent. There is nothing to employ us on the reserve. When I was a girl, there was no such thing as welfare or unemployment. We were very good farmers. Now, for the last 40 years, we’ve had others farming our land. The government has failed in its fiduciary responsibility to us and has done everything it can to make us dependent.

WH: As an educator, you must see the value in education.

BHW: Education is a big way out for us, getting the skills we need to find employment. But at the same time it’s also important to educate Canadian citizens on their responsibilities guaranteed us in the treaties we signed. We have become mired in institutionalized poverty to where we are strangers in our own homeland. Education for both parties would go a long way.

WH: You’ve been doing some lecturing at Lethbridge College recently.

BHW: Yes. I’m honoured that instructors have brought me into their classes to speak to students. I’ve spoken to Environmental Studies classes, which I enjoy because I’ve been an environmentalist for a long time since learning from elders about the need to treat the planet as Mother Earth, as a living being. I feel respect from students at the college; I’m humbled by it.

WH: There is a wide difference too, between First Nations and their customs. We have a story in this issue about a young woman coming to Lethbridge College from the Northwest Territories who had little knowledge of Blackfoot culture. BHW: Blackfoot culture is unique in that it was not touched by Europeans as early as were others. Our culture has stayed intact since the 1400s; we’re still practising our sacred ways. I’m teaching the Blackfoot language in Early Childhood Education classes because I believe it’s important to keep it alive.

WH: Do you enjoy teaching?

BHW: I always wanted to be a nurse, but my father didn’t want that for me; he said “you be a teacher.” I was hired to be the school secretary [at a Blood Reserve school] but I got pushed into the classroom. It’s been a great experience.