Basketball has taken her around the world. Now, Dawn Keith is taking basketball to a world of new players. 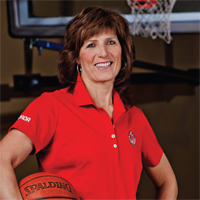 Waiting for the photographer to set up for his best shot, Dawn Keith takes a few of her own, dropping them in effortlessly with a motion that comes automatically from years on the hardwood.

The Lethbridge College physical education instructor and nationally recognized basketball coach has spent most of her life either playing or teaching the game. Each spring, through her Cougar Club, she’s exposing its fundamentals, and her love for the sport, to girls from grades 5 to 11, just one of the ways she’s giving back to those following her.

Keith, coach of the Catholic Central High School (CCHS) Cougars girls’ team, is also mentoring young women who want to break into the coaching milieu. She shows them the path she took to become assistant coach of the Canadian Cadette (U17) team, which she took to Mexico City in August 2009 and to Europe for the World Championships this past July.

“I’d like to think I’m the conduit for young aspiring coaches to advance in their goals,” says Keith, who coached at both Lethbridge College and the University of Lethbridge. “We need to develop pathways to certification for coaches other than just relying on parents.”

After starring for CCHS, she played at Scottsdale College in Arizona where she was a shooting guard. She finished her career at the U of L where, as part of a still-unfulfilled lifelong dream to own a restaurant, she studied business management. In 1986, her fourth year as a Pronghorn, the team was ranked in the top 10 in Canada all year, and won the bronze at the Canadian national university championships.

Louisa Zerbe, her mentor, got her involved teaching children’s summer basketball camps at the U of L as well as through Basketball Alberta, and convinced her to study physical education. (This career switch was likely hereditary: her father, Robin Fry, was head coach of the U of L men’s team; her mother, Jodi Nilsson, is a multiple Canadian racquetball champion and Dawn’s second mentor.)

In 1991, she began a small business in Lethbridge to expose youngsters to the game of basketball, which was the second leading popular sport in the world after soccer. STARS Basketball Association was a program in which the philosophy was teaching “fun, fitness and fundamentals” to children age six to 12.

During a brief time coaching at Concordia University in Montreal, attempting to bring the “western” game to an underachieving eastern team, Keith honed her skills at an elite level. She studied at the National Coaching School for Women in Halifax, one of the first camps of its kind. Those who passed through became a cohesive group with a common goal: to develop the technical, practical and strategic levels of the game of basketball.

“That’s when I decided to pursue coaching education,” says Keith.

Coaching in Canada seemed to be an ‘old boys’ network at the time and it was difficult to gain a coaching position. But the top icons in women’s programs were trying to reach out to young aspiring coaches, and through a camp such as this a connectedness in women began to form.

“You needed knowledge and certification to get into coaching positions.”

Back in Calgary, she became head coach at Mount Royal College (now Mount Royal University), added a teaching position, and took over the Alberta U-19 team. She also married her fiancé, Warren Keith, who, seeking a career as a firefighter, found one in Lethbridge. She left Calgary a year after being married in 1992.

Back home, Keith taught at the U of L and served as president of the Pronghorns Booster Club before crossing the river to Lethbridge College in 1994, under the tutelage of then-athletic director Tim Tollestrup. She took her team to one national final tournament, finishing seventh. She also became the first coach tossed from a game, 8½ months pregnant with her second child, Katie, now 13. Her oldest, Nick, 15, spent Kodiaks games in a baby carrier on the end of the bench, often minded by then-trainer Jim Manzara.

She retired in 1999 to spend more time with her family and less on the road. In 2002, Keith became involved with Basketball Canada’s newly created Basketball Centre for Performance in each province, which sought to identify Canada’s top young players. The concept was to teach the same curriculum of fundamentals and game terms across the country. Basketball Canada had studied the Australian system, impressed with the game’s growth in a similarly large, under-populated country.

“When they adopted the plan here in Canada coaches believed in it,” says Keith. “It fostered open communication in the development of young players. The men’s side followed suit the next year. Now, we’re all on the same page, developing phenomenal athletes and future Olympians.”

Women’s basketball nationally was divided into two age groups, U19 being the Junior National age group and over 19 years the senior national team. Basketball Canada developed its first Cadette (U17) program in 2009; Keith signed on as assistant coach. The program assessed players from across Canada in athletic talent, technical ability, physical ability and potential.

“We also looked at their social, psychological and emotional levels,” says Keith. “Those aspects are important when developing young athletes who have to travel abroad, are exposed to unfamiliar environmental conditions as well as differing intakes of food. They need to learn the mind-body connection.”

Once chosen, the team, with players from most regions of the country, went to Mexico City in 2009 after just three days of preparation. (Unlike some countries who “centralize” their teams in one location, enhancing cohesiveness, Canada brings its teams together just before major competitions). In Mexico City, they found themselves training in a $30-million facility and staying in a gated and guarded residence. After winning all their first-round games and beating Argentina in the semi-finals, they lost to the United States to earn the silver medal in the Tournament of the Americas.

Their finish qualified Canada for the world championships in 2010 in Toulouse, France, where the team finished 11th. While Keith had hoped to be in the top eight, it was an acceptable result, considering the team had two days of tryouts in Toronto and three exhibition games in Barcelona’s 42C heat, sans A/C.

Regardless of their results, players dined at a cultural feast. In Spain, they were invited to watch the World Cup soccer final with Spanish hosts; at the tournament, the Tour de France cycled through Toulouse.

“Years from now, the girls won’t remember whether they won or lost as well as they will the wonderful life experiences,” says Keith. “Our goal is to build better people with good personal life skills and accountability, as well as top-notch athletes.”

Dawn Keith by the numbers