If any employers know the value of hiring Lethbridge College students, it’s the grads who came before them. 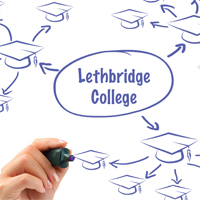 Three alumni explain why they look to the college first when it’s time to hire.

When the Lethbridge Regional Police Service goes on the hunt for recruits, it doesn’t require Sherlock Holmes to find them.

When Ward Bros. Construction requires carpenters and civil engineering technologists, it checks resumes for one telling piece of information.

And when Tangle Media, one of Lethbridge’s bright, young web firms, needs an infusion of bright, young talent, it offers “try-outs” to a specific group of candidates.

“We have a long history with Lethbridge College’s Criminal Justice program because we helped create it,” says the 2008 Distinguished Alumni recipient. “Several police services are part of the program’s advisory committee. We realize the college wants to stay current. Instructors come from a nice diversity of backgrounds and academic qualifications, with a keen understanding of policing.”

Forty years ago, the then Lethbridge City Police felt confident enough to hire only Lethbridge College grads, such as McKenzie, who began in the ranks, and put them on the beat, albeit on the fringes of the city to start. Today, the service considers grads from other policing programs as well, but all wind up at Lethbridge College for their recruit training specific to the force’s requirements.

“I’m proud of each of our members,” says McKenzie. “But I’ve noticed students from the Criminal Justice program catch on faster. They get a good balance of academic and practical training. Yes, we hire from other CJ programs, but we know Lethbridge College is extremely community minded and we’re pleased to be associated with it.”

Colin Ward (Civil Engineering ‘95), Lethbridge College’s Distinguished Alumni recipient in 2010. As a partner in one of the city’s premier construction firms, he knows how to find a pool of ready talent.

“If I had two equal applicants and one was a Lethbridge College grad, I’d take the grad,” says Ward. “We know they’re stable and well-trained. If they receive their training here, they’re much more likely to stay here, so it’s not a waste of time and money.”

Ward Bros. has some 20 Lethbridge College-trained carpenters on staff, along with three Civil Engineering Technology grads and one from the School of Environmental Sciences. The CET grads are involved in project management.

“As a program grad myself, I know what they took and I can relate to their training,” says Ward. “When I give them a project, I just tell them to use the principles they learned at Lethbridge College and take the project in this direction.”

At 16, Fergus Raphael (Communication Arts – Broadcast Journalism ’03) was operating a TV station in Shaunavon, Sask. Sure, he ran it off his computer over a blank channel (don’t ask how), and slightly fewer than 2,000 souls could pick it up, but hey, it was still a TV channel.

One of the features he offered viewers was “Yesterday’s Weather,” an admittedly useless feature that won him a lot of smiles. But it’s his forward thinking, now, that pays the bills. And while Raphael, owner of Tangle Media in Lethbridge, taught himself the world of multimedia, he understands the value of hiring Lethbridge College grads, people he can turn his back on and know he’ll get work he can trust.

Fergus Raphael has taken on six practicum students from the Computer Information Technology program since he opened Tangle six years ago, hiring three of them as soon as they graduated.

“I serve on the program’s advisory committee and work closely with the instructors, so I know the students learn a lot more at Lethbridge College,” says Raphael. “They know how to make it work, and they bring their ideas and a disciplined approach. It gives me confidence when I’m hiring employees to know what they’re learning.”

Raphael uses the practicums as his version of employer window-shopping.

“It’s a bit like ‘try before you buy,’” he says. “In the 200 hours you have with a student, they’ll either be training and everything is working or they’re not. It saves us thousands of dollars in training. When I hire a Lethbridge College grad, I can give them a key to the front door knowing they’ll show up Monday morning. The timing works well for us, too. They come to us in the spring and they’re looking for work in the summer.”

The CIT 2+2 transfer agreement (two years at Lethbridge College followed by two in the University of Lethbridge’s bachelor of computer science degree) is attractive to students, says Raphael, and works for him as an employer. Students who start at Tangle after the first two years are more committed to the Lethbridge market and will stay longer. He’ll work around their class schedules, knowing he’s got employees who have learned, and are learning, from top-shelf instructors.

“I’d be a fool to begrudge them that,” he says.

The type of career Tangle offers, says Raphael, attracts a lot of applicants who think they have the required skills; Lethbridge College CIT grads can live up to the hype.

“The work is mostly unsupervised because I can’t look at it and verify it actually works until it’s finished,” he says. “The program’s grads have already indicated a deep appreciation of what they do. They’re thoughtful, innovative, committed and able to work by themselves.”