More Lethbridge College instructors are completing their PhDs, seasoning their teaching with the 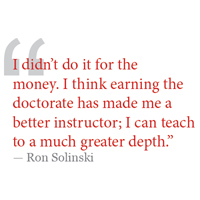 knowledge gained. But the journey requires sacrifice from those around them.

Leigh Kowalchuk and Ron Solinski will soon be pondering long-awaited vacations. For five-year-old Leigh, world travel is a definite possibility, while Solinski, an instructor in Lethbridge College’s Child and Youth Care program, will likely head to the family cabin near Kootenay Lake, B.C.

For Solinski, the return to the cabin is a return to a “previous life,” one free of the toil of chasing his doctorate in child and youth care.

“It was built as a place of enjoyment,” says Solinski, who finished his doctoral work in August 2010. “But after working on my PhD there for so many summers, it became a place of immensely difficult work.”

Young Ms. Kowalchuk knows nothing of what it takes to earn a PhD, but she knows her daddy, Terry Kowalchuk, head of Lethbridge College’s School of Environmental Sciences, put a lot of effort into his, starting two years before she was born.

“She understands when daddy’s working, he’s working,” says Kowalchuk, who expects to finish his PhD this year. “I would have loved vacations the last seven summers, but we plan to have one when I finish. Wherever they want to go on this planet, that’s where we’re going.”

The “they” would include Kowalchuck’s wife Kim, who, Terry agrees, was with him every step of the way as he tracked fur and fowl over the prairies in pursuit of a doctorate from the University of Saskatchewan in how animals respond to human encroachment on their habitat.

“It was a team effort,” he says. “I consider this as much her accomplishment as it is mine.”

If you’re getting the idea doctorates require work and commitment on behalf of the candidate, and a large slice of family support, you’ve about got it. Solinski’s children Zain, 14, and Nadia, 9, and their mother Randi Malmo, understood his quest was not going to be a nine-to-five weekday proposition.

“I put in seven days a week,” says Solinski, who is “extremely grateful” to Lethbridge College for granting him a one-year sabbatical in 2006 during his 4½-year quest under the auspices of the University of Victoria. “It was by far the hardest thing I’ve ever done academically. It was like a master’s degree cubed.”

While he devoted all his summers to his work, and a lot of nights and weekends during the school year (he’s been at Lethbridge College 20 years), the financial cost was as difficult.

“I didn’t do it for the money. I’m intrigued by what I teach and by mental-health treatment practices. I think earning the doctorate has made me a better instructor; I can teach to a much greater depth.”

For Kowalchuk, who, like Solinski, hails from small-town Manitoba, May through July for four summers meant hunkering down on the prairie landscape observing pintails, an activity that led many on campus to believe his PhD was in “counting ducks.” With grants of some $400,000 from outside agencies and a lot of gifts-in-kind support from the college, Kowalchuk was able to track pintails to determine how they respond when human activity encroaches on their habitat.

“It could have been grizzlies or grasshoppers,” he says. “I used pintails as my study specimen to test my hypothesis.”

Like Solinski, Kowalchuk put in those seven-day weeks. His work involved considerable research: he used some 30 researchers, many of them students in Environmental Science.

“Their participation allowed them to progress and continue their careers, something of which I’m most proud,” says Kowalchuk.

The college, too, was there when Kowalchuk needed its support, dealing with grants accounting and even welding materials he required in the field.

“Lethbridge College sees the value in investing in these endeavours, and understands that we make sacrifices to get there,” he says. Kowalchuk has file folders full of data, hundreds of thousands of Excel spreadsheet cells with information from every duck nest he studied. Each one had to be analyzed and double checked for accuracy.

“That takes away from your family,” he says. “I’d say to anyone thinking of pursuing a doctorate to be sure they can make that kind of commitment.”

Kowalchuk has yet to defend his thesis, something he’ll do soon. When he does, a shotgun of experts will be firing some stiff questions at him.

“You have to have a thick skin,” he says. “That’s science and it has to be critiqued and examined, in some cases by world experts. This is the major leagues and you have to develop a sense this isn’t personal. That’s helped me understand my position at Lethbridge College; evaluations are done of my work, not of me personally.”

Solinski joined the battle to rejuvenate his teaching.

“I was getting mouldy,” he says. “I needed to sharpen the pencil. It hasn’t really sunk in yet that I’m finished. I had a feeling on New Year’s Eve that I could now focus on myself for a change. Still, it was an incredible growth experience and I am very grateful to Lethbridge College to have had the opportunity.”

So, while Solinski contemplates cracking a cold one by the cabin door and the Kowalchuks visit travel agents, students at Lethbridge College will be learning from two more PhDs. One day, they, too, might follow the same track to the Machu Picchu of education. The trail is rocky and steep, but the view at the end is well worth the struggle.