It may be a small world at Lethbridge College, but the institution’s international spirit is anything but tiny. 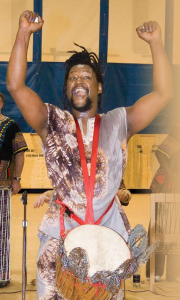 And nowhere was that worldly flair more apparent than during Welcome to the World, the college’s celebration of International Week in early February, when halls were transformed into a mosaic of cultures from around the globe.

Visitors and students could find evidence of international influence throughout the campus. Many employees, faculty members and students wore business card-sized flags indicating their country of heritage. Some wore Canadian flags, while others displayed more than one, reflecting their diverse backgrounds.

Currencies from around the world were on display at the college library during the week, and students had a chance to view highly-acclaimed foreign films.

Rose-Marie Litwin, chair of the college’s 50th Anniversary events committee, was instrumental in planning events for International Week. She says it gave students a chance to see just how global the college really is.

“An important part of Welcome to the World was showing our learners how many international students we have here and how involved we are with so many different countries,” says Litwin.

Students were shown a fashionable side of the world: an international fashion show featuring students modeling clothes from 15 different countries, including India, Vietnam, Kenya, and Peru. Some faculty and staff also wore traditional clothing that reflected their ethnic roots.

Throughout the week, visitors had a chance to meet and greet Lethbridge College students from around the world as part of the International Café. Students from Asia, Africa and Europe sat with passers-by and chatted about their native lands.

They also informed fellow students of the opportunities available through the college’s co-op programs.

Participants in International Week also got a taste of the wider world, as Charles Parker, head of the college’s food services department, and his Culinary Careers students prepared a selection of delectable dishes, including chicken curry, Moroccan beef, and Polish sausage.

The college also used the week to bring attention to, and help raise funds for, War Child Canada, a charity that provides humanitarian assistance to children affected by war. Dubbed “Walk a Lap for War Child,” the event involved participants walking a set path around the college and stopping at regular checkpoints to read about what war affected children endure every day. At the end of the trek, visitors were able to make a donation to War Child Canada.

To help finish the week with a bang, organizers enlisted the talents of Drum Café, an African drumming troupe that had never before performed in southern Alberta. African drums were handed out to more than 400 participants in the Val Matteotti Gym, who were then taught how to play during the next hour. At the end of the event, the sound of hundreds of drums echoed through the halls as everyone played to their own beat.

Litwin says she thinks Welcome to the World helped bring students and staff together, and foster a sense of community throughout the college.

“We hope it helped give students the feeling of belonging to a closer-knit community. If students, staff, and faculty can get involved together like this in a week, you feel like you’re part of something bigger, but you still feel close to everybody because you’re all doing the same thing.

“I’d like to see a good community come out of this, a close community of students and staff together.”

Many of the students who participated in Welcome to the World celebrations are part of the college’s English as a Second Language program, a program that prides itself on already having a closely knit community.

Judy Hasinoff, director of the college’s English Language Centre, says the program’s success is that it allows for the mingling of so many world cultures; students from 30 nations are studying on campus this semester.

“I think this is absolutely the best program in the entire college,” says Hasinoff. “We are on a world trip all the time.

“You can imagine what they’re bringing into our centre. . . to us, as staff and to each other. They’re sharing their life experiences, their culture, their language, their food, their world view. That is the best part of ESL.”

About 100 full-time students make use of the centre, but it also serves a purpose far beyond the college. Maple Leaf Foods has contracted the English Language Centre to provide English language training six hours a week for its Provincial Nominee Program workers from Central America. The centre also offers language courses, including Spanish, French, Mandarin, and Dutch, to the public. Even in the summer, the centre stays busy; this year it will be hosting camps for students from Brazil and Japan. The foreign students, staying with Canadian families, will study English in the mornings and technical subjects in the afternoons.

While some students studying ESL are only in Canada temporarily and will be returning to their home country, others are here permanently. No matter where they came from or where they’re going, every student needs to work hard to adjust to a different land with different customs, weather, and food. The language centre makes an effort to help students through the stages of culture shock they may go through.

“Our challenge is to help them through that, to keep their goals set, keep them moving forward, and keep the experience as positive as possible,” says Hasinoff. The centre can also help students learn what Canadians may take for granted, basic settlement things such as banking, negotiations with landlords and comparative shopping. The program’s instructors are a large part of the success, says Hasinoff.

“This isn’t a job for the ESL instructors; this is a life study. And they really go way beyond the extra mile in helping students be happy, be successful, and leave here with a big smile on their faces.”

And, it’s not all books and studying for the ESL students.

“Not only do we provide academic training and settlement training, we also have a lot of activities and field trips,” says Hasinoff. “And students love that part of the program. A lot of post-secondary ESL programs don’t have that; we do.”

Many students cite field trips to places such as Waterton Lakes National Park and Crowsnest Pass as their favourite part of the program. One of those students is Ashley Jang, a South Korean who joined the ESL program in December 2006.

“The program has lots of activities, it’s not just textbooks. It was very helpful for me,” says Jang, who enjoys the potlucks and other special events that allow her to interact with ESL students from other countries.

Jang will return to Seoul in April to study English Literature and Japanese at university. After graduation, she plans to become a part of the international business scene. She isn’t the only one who believes the college offers great ESL opportunities. The program has been nominated for a Lynn Howes Award, a national recognition given out by Languages Canada. According to Hasinoff, the excellence in the ESL program is reflected in the wider college as a whole.

“Our students are really helping bring a global attitude to the college. I think that certainly contributes to learner success and success in the workplace.”