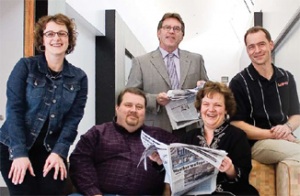 correspondents. But the more than 20- plus Lethbridge College graduates who work on the front lines of the city’s media are serving their audiences with similar purpose: they want to make a difference in people’s lives.

Working in the media has a significant element of self-fulfillment, of course, but the sense that the work is important and can change lives is compelling. After all, people, not things, are what make news.

Most of those who learned their craft in the Communication Arts program, whether in Broadcast or Print Journalism, share a common affection for their audiences; only natural considering they are, like their listeners and readers, all citizens of the same community.

Take, for instance, the dean of the city’s media, Mark Campbell, a 1974 grad. “It doesn’t matter if it’s a celebrity like Wayne Newton or neat people in Lethbridge, someone who has an interesting life or has a life change, it’s all fun,” says Campbell.

Campbell knows about life changes: he’s a rarity who has scored the elusive hat-trick of having his work showcased by radio, television and print. That helps him understand the people he interviews daily for his popular Scene and Heard segment on Global TV or as morning show host on CJOC 94.1 The Lounge.

Says Sherri Gallant, (Print Journalism ’86) who has reported most beats at the Lethbridge Herald: “You become more connected with people in the community than in most other lines of work.”

“When I was on maternity leave preparing to go back to work, I came across a file of letters from readers that reminded me why I like to write. It was all really heart-felt, emotional stuff. People thanking me.”

For Cathy Martin (Broadcast Journalism ’84), it’s important to have fun and she and Brent Brooks (an honorary college alumnus) do that on the morning show at 107.7 The River. But, it’s their listeners whom they feel they are really working for; the real stars of the show.

“The news has to be serious,” says Martin. “But I also think people want to have some fun. They want to be able to laugh at a joke or comment.”

And, people respond by phoning.

“They are willing to give us their opinion. Sometimes they are very excited about it. It makes people feel they are important. We try to make people feel that way.”

Since the college started offering journalism courses in 1967 and radio arts courses in 1969, it’s been a mutually beneficial relationship: students have cut their teeth in the media world as apprentice journalists or all-night DJs while taking classes. Grads numbering in the hundreds have taken jobs in radio, TV, newspapers and magazines here, across Canada and internationally.

Terry Vogt (Broadcast Journalism ’71), CTV Lethbridge news director who has interviewed every prime minister since Pierre Trudeau, now finds more satisfaction in connecting with the underdog. After spending the first dozen years of his career in radio in The Pass, Lethbridge and Calgary, he turned to TV where he felt he could tell stories better. The appeal for Terry is in “talking to people and being able to convey how that affects people’s lives. Sometimes I feel we can help someone who doesn’t have the clout others do.”

For Kristen Harding (Print Journalism ’02), crime reporter for the Lethbridge Herald, the thrill of the chase is a prime motivator.

“When you’re onto a story and it’s a good story, you know there’s something more”, says Harding, who started at the newspaper a few weeks before she graduated. “You know there’s a story you need to tell, something to open the public’s eyes, your own eyes. It’s just an exhilarating feeling.”

But, Harding’s compassion shows when she talks about Sharla Collier, a youth care worker murdered in the Oldman River valley in 2002.

“It’s so tragic it chokes me up to even talk about it. Sharla’s mother’s impact statement was so moving. I can’t make it better. But I can be a voice for her. I can tell her story and I hope in some small way that brings closure.”

When she graduated, Dori Modney (Broadcast Journalism ’76) was the only female among nine students in the program, and became the first woman hired on air at the old CJOC radio station.

“The manager called around to other stations and said, ‘Guess what I just hired,’” says Modney.

As news director now at Country 95.5 FM, in a newsroom with 2006 Lethbridge College grads Patrick Burles and Tristan Tuckett, Dori has seen a change in how radio folk relate to listeners.

“We talk to people now instead of lecturing to them.”

Most don’t hesitate when asked to give to the community.

For Tony Deys, (Broadcast Journalism ’89), it shows in his willingness to emcee community events, a role he sees as public relations for Country 95.5.

“I’m at my best when there’s a microphone in front of me,” he says. “It’s my comfort zone.”

But, it wasn’t always that way; he recalls his first emceeing role, a minor hockey banquet when he was covering news and sports for CHAT Radio and TV in Medicine Hat.

He learned from that and now finds the preparation is ongoing, even throughout the event. As it is on air, “You can’t forget your audience.”

Like their counterparts across Canada and overseas, most work journalists’ hours. As Campbell readies for the third take of a promo for Scene and Heard, he apologizes to the cameraman with a chuckle: “I’ve been up since 3:30 a.m.”

Hours like that go with the territory at times. But Campbell has been having fun on the job for 34 years, after rejecting an offer to attend university and, on the advice of a family friend who counselled students at Lethbridge College, he sat down in front of a microphone and turntable in the broadcast area “imagining I was on CHEC (radio station).” He was hooked, and still favors radio for its “spontaneity, which has a bit of risk, but is always fun and keeps you on your toes.”

“The college really worked for me. When I was in high school, I had no interest in writing. But, when I finished the college program, I could write. It really worked.”

Vogt seemed destined for media work. In high school at Picture Butte, a broken leg kept him off the football team roster, so he picked up a video camera and started shooting the games. He also recalls doing sound effects on his father’s reel-to-reel tape recorder with his brothers, simulating play-by-play broadcasts. At college, he did play-by- play for the local cable channel and later for the Crowsnest Pass Red Devils games on CJPR.

Gallant found “the tough stuff, pressure days where we had to do news stories on the spot most helpful. The get-over-yourself advice helped, to know you’re going to have to learn to take criticism. You can be a blubbering mass of ectoplasm if you’re too sensitive to criticism.”

Garey Sheppard (Broadcast Journalism ’05) recalls a family trip to San Diego when he was seven. A TV news reporter was named Gary Sheppard. “That was cool.” Now that Sheppard is a producer at Global TV in Lethbridge, it’s “way beyond expectations.” He credits the college for his start.

“I learned a lot about myself. I think I came out of the program with so much more confidence in my daily life. It helped me realize my skills and talents.”

Martin found the college “does a really great job of helping students grow up. Instructors are always available. If you have a problem, whether it’s academic or personal, they were always there.”