Every year since 1971, nursing students have accepted their diplomas from Lethbridge College and begun 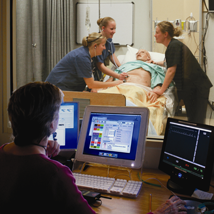 their careers in health care. For 37 years, they took on roles in southern Alberta and around the world, lured to foreign ports as highly sought exports from one of Canada’s top nursing programs.

So there was likely a touch of whimsy in the air when the final class of 25 lined up for a group photo in December, representing the last diploma program students to graduate.

Following the province’s mandate, those entering the profession must, by 2010, hold a degree in nursing, a four-year commitment to education that will lead them, under the auspices of NESA (Nursing Education in Southwestern Alberta), to complete their first two years at Lethbridge College before taking two additional years at the University of Lethbridge.

NESA was formed in 2001, a partnership between the two schools that replaced the former Southern Alberta Collaboration for Nursing Education, which had included Medicine Hat College.

Since then, nursing students had the option to enter the field after the 2½ -year diploma program, or carry on to earn their degrees. Graduates from both routes write national qualifying registration examinations to legally use the title Registered Nurse.

Experienced nursing instructors believe the move to a degree program is a positive step for the profession. “Nursing now requires a broader scope of practice and is applied to more settings,” says Sheila Heinrich, chair of nursing at Lethbridge College. “It requires greater independence of practice and deals with a higher acuity of patients than before.”

Computer technology has added a new level on its own, from online charting and test results to high-tech assessment and treatment tools. The degree program will also open options for management and academic positions, should students decide to continue their educations to the masters and doctorate levels.

Nurses now work in more locations and in different types of practice than they did in 1971. Some work in isolated northern areas in independent practices, while others specialize in areas such as community health, international projects, research and clinical nursing practices, or enter related fields.

Joyce D’Andrea, who facilitated the first graduation in 1971 and the last in December, recalls the exodus of nurses, primarily to the United States, during the Ralph Klein years, when nursing jobs were slashed and grads sought work south of the border. Now, a greater effort is being made to keep them here.

This year, Chinook Health offered supernumary positions, allowing new nurses to be mentored even though no openings existed at the time. In some jurisdictions (Calgary, Edmonton and throughout Saskatchewan) nurses are offered signing bonuses to fill lengthy lists of vacancies. Nursing students are coming to Lethbridge College from farther afield to take advantage of the profession’s opportunities. About one third of those who enter the nursing program come directly out of Grade 12; most have added some life experience to their portfolio, while some have other post-secondary education. The one advantage they have over younger students is their communication skills that, coupled with a positive attitude, open mind and a willingness to work, will serve them well during their studies, in which the focus is on teamwork and co-operation to learn. Loni Burbank, member of the final diploma grad class, understood this from the beginning.

“You have to be self-directed, but also interdependent,” says Burbank, one of the organizers of the final grad ceremony. “You are responsible for others; if you don’t do your part, you’re impeding the learning of your classmates. It’s much like it is in the field.”