If Erin Young thought she’d take a little time for herself after graduating in April, the Lethbridge College 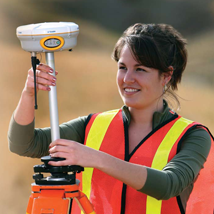 Geomatics Engineering Technology student has put that thought to rest.

She’ll barely have time to walk across the convocation stage with her classmates before she heads to work. Darn that 100 per cent employment rate: backpacking in Europe will have to wait.

Once in Calgary, she’ll trade her grad gown for khakis and a ball cap, the better to feel more comfortable in the field and in a career dominated by men. (Although, to be fair, the gender discrepancy is rapidly eroding as more women choose this expanding field.)

“As one of only three women in the program (of 35), I definitely felt the desire to work harder just to prove I could do it,” says Young, now just weeks from earning her two-year diploma.

That piece of paper, suitable for framing, will come with value added. Late last year, the GET program and the Engineering Design and Drafting Technology program received national certification from the Canadian Council of Technicians and Technologists, following an in-depth investigation on campus, a major advancement for both programs.

“It gives national recognition to our learners’ achievements, allowing them transfer opportunities across Canada as well as internationally,” says Dennis Sheppard, head of Lethbridge College’s School of Engineering Technologies.

Before accreditation, students earning diplomas in the two programs were qualified to work only in Alberta, and had to pass additional exams to work in other provinces. Accreditation reduces that barrier.

“National accreditation says if you meet the standards set by Lethbridge College, you’ve met the standards across Canada,” says Sheppard. “It becomes a huge marketing tool for us to attract students to both programs.”

“That was always the case,” says Sheppard. “Now we have the paperwork to prove it.”

Both programs take in 35 students each fall. EDDT students become design technologists, working for, among others, civil engineering firms, Aerospace and petrochemical fields and manufacturing firms. Geomatics grads, who traditionally enjoy a 100 per cent employment rate, work for environmental consultants, government, surveying and engineering firms, agriculture, law enforcement and others.

For Young, a Calgary native who once set her sights on teaching, the high demand for her new craft might also be a passport to the world. Geomatics professionals are sought everywhere, she says, from Ireland to Australia.

“There’s no student who can say they can’t find work,” says Young, who quickly took to the science and computer aspects of the program. “The accreditation also helps put you at ease by opening so many more doors.”

Young hopes to put in some time in the field (“I’ve got student loans to pay”) before taking advantage of a 2+2 agreement between Lethbridge College and the University of Lethbridge that will allow her to complete a Bachelor of Science in Geography with a concentration in geographical information sciences.

She can take confidence from former geomatics student Aaron Glover, who decided to add the lustre of a university degree to his geomatics diploma from Lethbridge College and found crossing the Oldman River a hassle-free experience.

The Fernie, B.C. native, who graduated from Lethbridge College in 2006, was able to slide directly into studies at the University of Lethbridge, thanks to the formal 2+2 agreement.

“It was straightforward,” says Glover. “With an agreement in place like that, the transition is pretty smooth.”

Glover, who plans to work either in municipal planning or for an engineering consulting firm, said his studies at Lethbridge College gave him the grounding in the technology he’ll need to pursue his career, while his U of L courses add more background and refining to his knowledge base.

Lethbridge College has developed several 2+2 agreements with the U of L, allowing students to complete their two-year diplomas and seamlessly move to complete two years of university work to earn their degrees.

“I needed the application aspect of the work, so I decided to start at Lethbridge College,” says Glover. “The college has a better grasp of what the industry wants.”