For Kelly Oikawa, it’s all about Hanna Rain. When his first child was born recently, the Earth shifted for the veteran 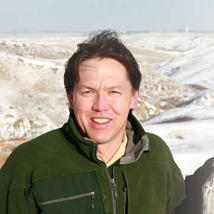 Lethbridge College biology instructor. Although Oikawa has long been a campus and community leader in environmental consciousness during his 14 years at Lethbridge College, Hanna Rain’s birth gave him his most intrinsic reason yet for wanting a clean, healthy future for the planet.

So although Hanna Rain has a few years before she considers a post-secondary education, her dad is as adamant as ever about making his students see green. And if that means using a little bribery on the 300 or so with whom he works in an academic year, well, it’s a worthwhile expenditure of bonus marks.

“I’ve never had a problem encouraging student involvement,” says Oikawa. “It’s amazing what students will do for you.”

Of course, the bonus marks help, too. And students who involve themselves in Oikawa’s projects score much, much more than simple marks on their academic record. Each one who steps up is learning about the environment, about the world and, perhaps most important of all, about themselves.

Here’s what Oikawa’s students have done in the past few semesters in aid of the old home planet:

“We’ve made it our mandate to hold these forums for each election,” he says. “The candidates were most appreciative of a chance to speak on the environment, but more importantly, several students involved in the project actually voted for the first time.”

Voted for the first time, but likely not for the last time; one bonus mark can go a long way in life.

All of these activities are, of course, extra-curricular, and require a deep-seated commitment to the cause. But that’s not much of a stretch for Oikawa, who was a founding member of the local branch of Trout Unlimited in his teens and has always enjoyed the outdoors since he was a boy in Picture Butte.

“The discipline we work with in biology is conducive to out-of-class learning,” says Oikawa. “I feel if students take ownership of something, they get more out of it, and I think that’s appreciated by the students. Also, when you teach environmental responsibility, you have to practise what you preach.”

The level of community involvement in Oikawa’s classes is high. In lieu of a term paper last year, five groups of students gave presentations to elementary-school classrooms on how to be environmentally friendly at home, a project welcomed by their hosts.

And good for the environment. Oikawa took students on a field trip to Jasper and Banff, multi-star accommodation included if they enjoyed gazing at the night sky outside their tents. For students from Korea and Japan, it was the experience of a lifetime, made even better with the sighting of a dozen plus bears.

“Environmental issues aren’t pretty, so after a semester of looking at the dark side of things, I wanted to take them camping to show them what a pristine Earth looks like.” Oikawa is quite familiar with the dark side. He has a collection of horror movies that make Nightmare on Elm Street look positively Disney-ish. An Inconvenient Truth, Al Gore’s call to end global warming, is merely the most recent. It shares a cupboard with Manufactured Landscapes, The Corporation, End of Suburbia and Refugees of the Blue Planet. Add in the newly released The 11th Hour and you have the collected works of E.A. Poe on environmental disaster.

Oikawa sees overpopulation as the largest single issue facing Earth today, a phenomenon soon to culminate in an end to many of the planet’s resources. While he may not be able to do much about that, he’s determined to keep the larger picture in focus at Lethbridge College.

“Our growing population and the manner and rate that we are consuming resources will not allow us to maintain what we are doing,” he says. “I also think society has been led to believe growth and development is something that is always positive. This is what business and governments seems to instill in us so they can profit or increase profit for a select few while leaving a footprint that dramatically affects everyone in the long run.

“The environment has been around for billions of years while the economy is a modern human invention to which the majority of people in power have given top priority. Maybe as a species we need to reassess this.”

Dannie Lien, one of Oikawa’s General Studies students, is a southern Albertan who gets it already. She and her husband run a dryland farm east of Warner and understand change is not immediate, but rather incremental.

“We use chemicals on our land, and my husband also works in the oilpatch, so we do profit from things that aren’t so environmentally friendly,” says Lien. “But that’s reality.”

Instead, the Liens and their children do what they can, composting and recycling long before they were buzzwords, and educating themselves on the state of the Earth. Lien still recalls the most profound moment on Oikawa’s student camping adventure: a trip to the edge of a glacier.

“There were markers showing where the glacier had once reached 100 years ago; it was miles from the present edge,” says Lien. “Even the 1992 marker was a long way off. I couldn’t believe that much ice had melted so quickly.”

To his extensive to-do list, Oikawa has added formalization of a campus environmental club, a group that hopes to co-ordinate and secure all recycling on campus with a view to using the money for additional education events.

He and Edith Olson, School of Environmental Sciences instructor, are co-chairs for an Environmental/ Sustainability initiative on campus that will nurture and guide the student club, include representation from all program areas, and make recommendations to college leadership.

“Awareness of these issues is better now than it was, but it still needs to be part of our education,” says Oikawa. “Young people know these issues on the surface, but we need to offer solutions and a greater understanding. You have to give them the shock and show them the hope.”

Several initiatives have been started to reduce the college’s environmental footprint and educate students about sustainability. Apart from The Living Home Project (Wider Horizons, Vol. 1, No. 2) here is a sampling: