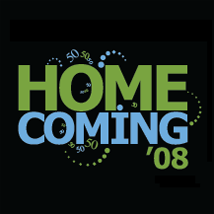 For five decades, Lethbridge College has prided itself on providing only the highest standards of education for its learners. Instructors, support staff and administration alike have taken pleasure in watching their students grow, learn and become the best of the best.

This year is no exception. With a new name, a new look, and a new attitude, the college is flying higher than ever, and a new crop of students is preparing to make its presence known on the world stage. So, after all this, there’s only one thing to do: break out the bubbly, invite the entire city, and celebrate the success with a party that promises to be no less than extraordinary.

Homecoming ’08, May 16-18, is the finale to the college’s year-long 50th Anniversary celebration; 1,200 are expected to renew acquaintances with the campus and each other. Laura Carlson, manager of development at Lethbridge College, says the May long weekend provides a chance for students to mingle with alumni and to understand the import of the college’s history.

“We want current students to feel like they are becoming alumni already,” says Carlson. “It’s also a good chance for them to see where their predecessors are at.”

By the end of the weekend, they’ll have answers to those key questions of life, such as who lost the most hair, who gained the most weight, and who’s driving the Beamers?

Several programs are already accepting registrations for the Friday evening program reunions, including Nursing, the School of Justice Studies, the School of Business, Communication Arts, Child and Youth Care and Early Childhood Education.

Reunions are also planned for alumni who graduated between 1957 and 1982 and another for all retired staff and faculty Saturday afternoon.

Many other programs are setting up meeting places for their alumni and friends to reunite, so if your program isn’t listed above it doesn’t mean there isn’t something in the works.

“It’s easier than ever to plan a reunion,” says Sandra Dufresne, alumni co-ordinator. “The Alumni Office created a reunion planning handbook, Reunion Planning 101, developed to guide volunteers through the planning process covering everything from caterers to accommodation.”

The Alumni Office is looking for additional volunteers to assist with the co-ordination of reunions and finding some lost alumni, and is ready with support. Kelly Burke (Communication Arts ’07), is available to help with marketing, planning and communicating with alumni.

“We provide contact lists of the alumni that have current contact information and can assist in ways of communicating with these people,” says Burke. “We are also developing templates and planning a phone-a-thon to make sure we get all of our friends back on campus that weekend.”

For more information on the Alumni Office, reunion support, the handbook and connecting with former classmates please contact her at: Kelly.burke@lethbridgecollege.ab.ca or call 320-3202 ext. 5205.

For more information on Homecoming events and program reunions, or to register, visit celebrating50.ca.

Tailgating: A Parking-Lot Meat and Greet

Ask most people the meaning of the word “tailgating,” and they would probably drag up an episode in which a distracted driver bumped them from behind, and then grumbled about the significant amount of damage caused.

Well, news flash folks: tailgating isn’t always a bad thing. This spring, Lethbridge College will be taking a lesson from its American colleagues and doing a little “tailgating” of its own.

Yep, it’s a chance to lower your tailgate, have a cold one, and take part in the biggest celebration of the year.

Homecoming ’08, May 16-18, will be host to many events, including a tailgate party on Sunday to wrap up on-campus festivities. Tailgating is a popular tradition at American college homecomings and football games, at which people can barbecue, socialize and listen to live music while sitting on the tailgates of their vehicles.

“(Tailgating is) usually centered around a sporting event,” says Laura Carlson (Communication Arts ’93) manager of development at Lethbridge College and its self-styled biggest football fan, who explains that it also helps to generate excitement in the community. “We wanted to do this before the Tom Cochrane concert, our biggest event of the weekend.”

Though the true origin of tailgate parties is unknown, there are two competing legends at the centre of great debate:

Some say the tailgate was born at the very first college football game: the 1869 match-up between Rutgers and Princeton, when fans grilled sausages in buggies behind horses’ tails.

Others say the practice originated at Yale University in 1904 where hungry fans traveling by train brought picnic hampers to feed their growing appetites.

Whatever the case, Lethbridge College is prepared to embrace this tradition, and share the fun with students, staff, community and alumni free of charge. The event will feature live music, children’s activities, as well as a huge barbecue cook-off. People are also welcome to reserve tailgating spots in the parking lot, and anyone who does is automatically entered into the cook-off. Ladies and gentlemen, start your barbecues.