Campus pushing its sphere of influence 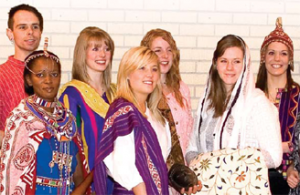 Lethbridge College has been recognized at an international summit for its efforts to forge world partnerships.

In February, representatives from the college, including president Tracy Edwards and Rick Buis, vice-president of corporate and international services, presented at the 2008 World Congress and International Association of Colleges Conference in New York City.

The conference’s theme, “Developing Global Partnerships,” was reflected in the presentations given by institutions from around the world. Buis, along with Cheryl Pollmuller, the college’s chair of business and Maggie Sun, its international manager, presented on Lethbridge College’s agreement with Estar University in China, joined by Estar President Jin Chang Chen of Qingdao, China. Edwards joined Jun Haraguchi of Japan’s Nippon Institute of Technology to showcase the partnership between the two organizations.

“Our agreement with NIT is unique in institutions across the world,” says Edwards. “Many presenters at the conference were asked to share a time slot. We were given a whole hour for our presentation, so that says a lot about what we’re doing here.”

“We have a significantly growing population of international students,” she explains.

“We’re trying to give the college a local, provincial, national, and international flavour.”

The world’s most populous country is now benefiting from the global attitude of Lethbridge College.

It’s hoped about 800 students at Estar University in Qingdao, China will eventually take Lethbridge College courses, as part of a five-year agreement between the two institutions.

It all began in 2005, when college officials visited China as part of a Lethbridge delegation. When Lethbridge College’s Board of Governors later decided that it wanted the college to have a larger global presence, Rick Buis, vice-president of corporate and international services, saw opportunities to partner with Chinese institutions.

As part of the agreement, Estar students can either complete their two-year program entirely in China, or they can opt to traverse the sea and study in Lethbridge for their second year.

Buis says the partnership is indicative of an ever-shrinking world.

“We’re getting more students coming from afar and wanting to attend Lethbridge College,” he explains.

“Ultimately we want our students to get an exposure to the world,” Buis adds, noting he’d eventually like all college courses to incorporate global aspects, from current events to law and business practices.

But the college’s work in China is far from done. Other institutions in the country have seen what Lethbridge College has accomplished in Estar and are interested in similar agreements with the college, with about five showing “strong interest,” according to Buis.

Ultimately, the Chinese partnerships will benefit students in both countries.

“Our work in China will have an impact on Lethbridge College,” says Buis.

“As an institution, we’ll start to have a broader view of the world, and that will benefit the students here.”