The Tiffin Conference is growing, loaded with energy and already looking forward to next year. 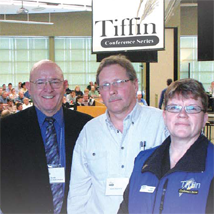 Well, what nine-year-old wouldn’t be?

Now one of the largest agricultural gatherings in southern Alberta, the Tiffin draws upwards of 300 participants to Lethbridge College each January and February to glean the latest word on the industry from world-class experts. The convergence of a knowledge-hungry populace and speakers who know the lay of the land has made the college an obvious venue for the event since it began in 2000.

What started as a two-day event mutated five years later into a one-day special session on the red-meat industry in response to the early rumbles of BSE. A second day was added in February to include other agriculture issues; the format stuck, says organizer Kathy Waddell (Communication Arts ’87).

“There is so much out there to be talked about,” says Waddell, a farm girl herself who knows her oats from her barley.

“The agriculture industry has changed as much in the last 20 years as it had in the previous 100. It’s a smaller world these days, but that has merely increased the amount of information available. Those in the industry in southern Alberta are hungry to look into the crystal ball.”

So, each January, Tiffin examines the world of red-meat and, in February, tackles other items of interest. Those coming to harvest information enjoy a bumper crop, considering this year’s January line-up that included the home-grown Renee Ehrnstein, director of organizational development at Whole Foods Market, the world’s leading retailer of natural and organic foods. Ehrnstein, formerly of Coaldale, rattled a few cattle pens in the land of the country’s feedlot empire.

Again, as with almost every recent Tiffin, an international flavour was added to the closing dinner, this year by Trent Loos, a sixth-generation American farmer, who founded Faces of Agriculture, a non-profit organization dedicated to educating consumers about food production in North America. His hour long radio program is heard across the Midwestern U.S., so when Waddell had a chance to guest on the program and boost Lethbridge College, she took it.

“It was a great opportunity to talk about the difference in the industry between the two countries,” she says.

The Tiffin is perhaps the largest area-wide event held on campus and represents the college’s determination to be an intrinsic part of the communities it serves. With that many people coming to Lethbridge College for an event of this calibre, it would be surprising if the Agricultural Technology program did not benefit from word-of-mouth advertising.

“One thing we’re most proud of is that we attract repeat attendees,” says Waddell. “They see how committed we are to agriculture and they become ambassadors for the college and for the Agricultural Technology program.”

It follows that those who come from outside southern Alberta leave with a sense of the area’s strengths and potential, and speak highly of it at home. Still, the main draw is from the surrounding area, and includes producers, ag business professionals, real estate and banking representatives and students in the ag tech program for whom event attendance is a requirement.

The event was named for Ronald Tiffin, who, born in Lethbridge to dairy farmers, broke thousands of acres of virgin prairie for dryland farming in the Milk River, Hussar and Bassano areas. He bequeathed the college $1 million, to be used to further agricultural education in southern Alberta.