OKI. My English name is Betty Ann Little Wolf, formerly Crowshoe. My native name was gifted to me at birth by my great aunt, and it’s Anatsi’piiksaakii – Pretty Bird. Sometimes, as survivors of trauma, we forget about the root of our survival. My roots of survival were my ancestors’ beliefs, and all you young people who are furthering your education.

You see, I did not have that. At 6-years-old, my life was sadly and rudely interrupted by the federal boarding schools for native children. For many years, I suffered in silence by all that hurt. After spending 10 years I aged out of the boarding school. I received a paper saying that I had completed Grade 8 and now I was going on to Grade 9. I was accepted into the provincial school in Pincher Creek but when I went, we found out I could not learn. And I started experiencing racial prejudice there.

And so I started running away from school. My parents brought me back, and when they did, they were told by the principal that I was not ready for Grade 9 but was equivalent to Grade 3. And so I rebelled against my parents again, this time for putting me in a provincial school (before that I was rebelling because they put me in boarding school.)

I started running again. But my father did not give up on me. What he did was to make arrangements with a farmer friend in Granum who would room and board me, and I would attend the high school in Granum. His wife was a retired schoolteacher, and she would be tutoring me. We all agreed to that, but then secretly I was thinking “I’m not going to like this because it’s a white home, and I’m going to run.” But that didn’t happen because of the support that she gave me.

I eventually started working for an oil company. There I found myself. I found my voice – something that was taken from me when I was very young. I worked there for 17 years and then another blow, another hurt. My first husband, who was non-native, was killed in an accident. So, I left the city to go home for a month. When I got home after being away for 24 years, I didn’t think I could survive on the reserve because of having lived in a city and worked for this oil company. But eventually I reconnected with some old friends and one of them was Maurice. I didn’t return to the oil company. I decided to stay home. I was starting to find my roots. My identity started coming back through our belief systems.

So eventually I found another job, and at that time Maurice and I had been married and we were blessed with a little baby and her name is Hadiga. I found a job at the school in Fort Macleod, and that job was something that I really enjoyed because I got to work with young people. I never had a childhood. I never had the life that these young people had. And so that’s where my healing really started – with the young people. 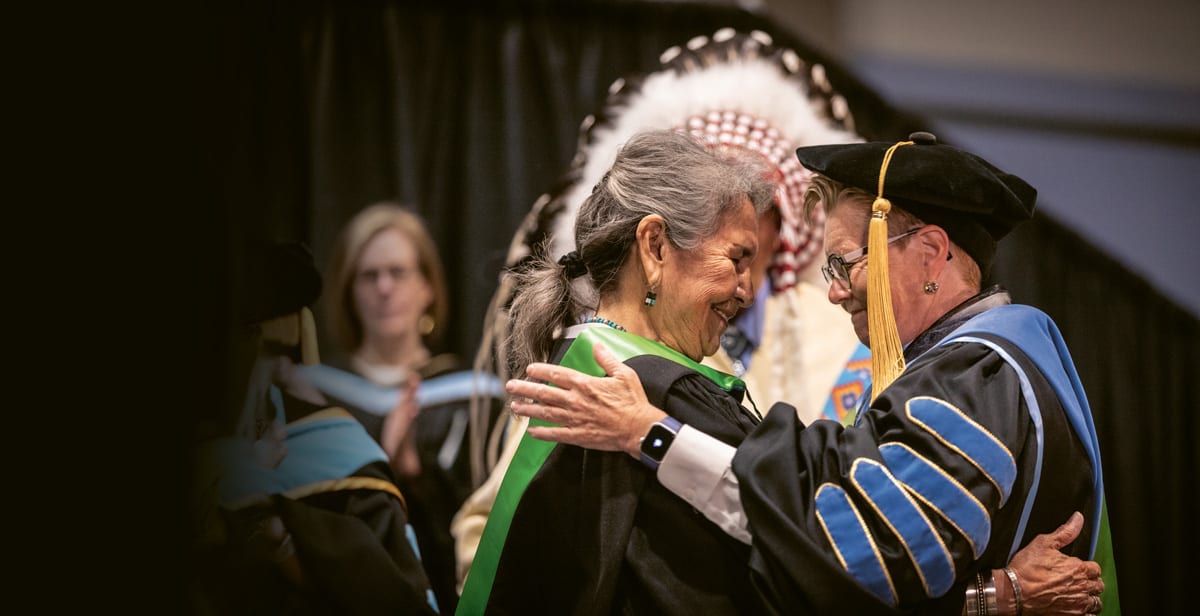 My story is my story. You hear many stories of survivors, but thinking back on my story, my survival had a lot to do with the young people and our elders. I had one mentor after my mother passed away – she was such a beautiful lady. Anything I wanted to know, anything I wanted to ask, I was not afraid to ask her.

And that’s what I wish for our young people to do – to find somebody who they truly trust and understand. I grew so much in those years. I give this honour to her, for where I learned to forgive was through this lady. I learned that it was beyond my dad’s control to take me to the school. All of the hurts I went through were beyond their control. She would tell me: “you survived. There’s a reason why you survived, and that is so that you can carry this message to the next young person who is suffering.”

I learned that as the truth of history unfolds, the truth of healing is evident. I would like to conclude by adding that you students had a big part in my receiving this honour. From my heart, I wish you all the successes in life.

As elders, we always say: “you are not far from thought and prayer.” For me, love was severed at a very young age. Well, I thought it was severed but it wasn’t. It comes back. And I’d like to leave you all with something that I didn’t have for many, many years, and that was hearing the words I love you. I’d like to leave you with “I love you all.”

Little Wolf is a Knowledge Keeper and Spiritual Elder in the Blackfoot community who has been a member of Lethbridge College’s Indigenous Services Cultural Support Program since January 2019. As a dedicated Blackfoot Grandmother (Kaa’ahsinnoon) to the college community, Little Wolf provides students and employees with traditional knowledge, guidance and support. She is also a member of the Buffalo Women’s Society – a sacred society in Siksikaitsitapi where members respect all, and practise their customs, traditions, beliefs and spiritual values. She believes Blackfoot culture is key in fostering a connection to identity. Little Wolf sits on the National Elders Council of Canada within the Assembly of First Nations and is one of 18 Knowledge Keepers for the National Council of Elders and Knowledge Keepers for the Turtle Lodge Centre of Excellence in Indigenous Education and Wellness.