On most days, you can find Christina (Maclean) Romeril in her cozy backyard “she shed,” typing away on what will become her second published mystery novel. her recent success as an author has been years in the making, and Romeril says it all started at Lethbridge College.

On most days, you can find Christina (Maclean) Romeril in her cozy backyard “she shed,” typing away on what will become her second published mystery novel. Her recent success as an author has been years in the making, and Romeril says it all started at Lethbridge College.

In 1999 – on the heels of a divorce – Romeril and her four children moved from Ontario to Lethbridge to start a new chapter. She had always intended on going back to school and the timing seemed right, so once her family was settled, she enrolled in the Business Administration diploma program full-time.

Finances were tight, though Romeril says loans and grants helped with expenses during the first year, and she used her Louise McKinney Scholarship to pay her tuition for the second year. “It was not easy going back to school with four little kids at home,” she says. “They were in daycare, and I didn’t have a car, so I walked to and from campus each day and couldn’t stay late to work on assignments. I remember some nights I would do laundry and just cry because I was so tired.”

Fortunately, Romeril had the support of a life-long best friend to help her through the tough moments. Cheryl Seaborn (Nursing 2007) made the move from Ontario to Lethbridge a few years ahead of Romeril, and she was thrilled when they were reunited. “We all lived together for the first few months,” recalls Seaborn. “My husband and I, we had the smallest house ever and we already had five children. We welcomed Christina and her four kids, and it was mayhem and chaos most of the time, but our friendship survived!”

"THE FUNNY THING WITH WRITERS IS THAT YOU ALMOST NEED TO FORCE YOURSELF TO WRITE EVEN THOUGH YOU ENJOY DOING IT."

When Romeril moved into her own space and enrolled at Lethbridge College, Seaborn became her cheering section. “I’d give her pep talks and remind her that all the hard work would change her life,” she says. “And when I enrolled in the Nursing program a few years later, Chris was there backing me up every step of the way.”

Looking back, Romeril is quick to agree the sacrifices were worth it. She graduated in 2002 and spent the next 16 years working as a banker in Lethbridge – first as an operations assistant, then as a personal banker and finally as a commercial banker. About 10 years after graduation, Romeril found herself back at the college to take a non-credit creative writing course.

“It was one evening a week, and it was really good,” she says. “It gave me a lot to think about, and I dabbled for a while, but I was pretty busy, so I shelved it.”

In 2018, Romeril left her banking job for a part-time position at the Stirling Library. Even though it wasn’t a busy schedule, she admits she couldn’t find the motivation to write. “The funny thing with writers,” Romeril says, “is that you almost need to force yourself to write even though you enjoy doing it.”

As it turns out, the nudge she needed would come in March 2020 when the COVID-19 pandemic forced the closure of the Stirling Library. “I spent the first two weeks of my unemployment on the couch watching the news,” says Romeril.

“But then it occurred to me that I shouldn’t be wasting this opportunity. The next day, I went to my office and hauled out the project I’d started years before.”

When she emerged three months later, Romeril had a semi polished draft of her first novel in hand. It was a major hurdle cleared. The next challenge? Finding a literary agent. “I’d come across something called #PitMad on Twitter,” she says. “A few times a year, authors can pitch their novels using only the 280 characters that Twitter allows. Agents will follow the hashtag and if they like what they see, they get in contact.” 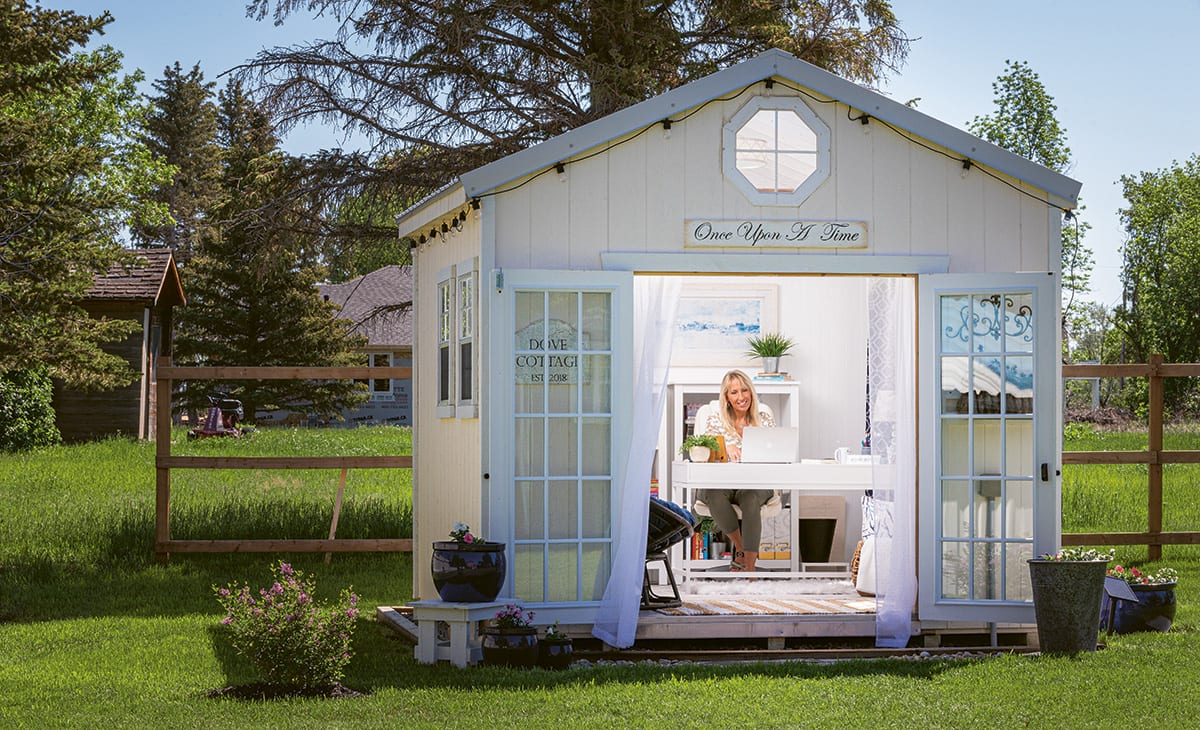 Christina Romeril wrote her first book (and is working on her second) in the writing cottage built in her backyard in 2018 and says “there is something, I can’t explain what, that sparks my creativity in that space like no other.”

Romeril’s pitch caught the attention of a literary agent in Virginia who, after reviewing a tailored one-page query, offered her representation. After some editing, rewrites and more editing, the book hit the publishing houses in June 2021.

By September, Romeril had signed on with Crooked Lane Books to get her novel published. A Christmas Candy Killing, a cozy mystery that follows identical twin sisters as they hunt for a killer in their fictional Rocky Mountain town, is set to be released on Oct. 11. Readers will be able to find it in hardcover and e-book formats. The audio rights have also been sold.

"BEING AN AUTHOR IN TODAY’S WORLD MEANS YOU’RE NOT ONLY A WRITER, YOU’RE ALSO AN ENTREPRENEUR... I USE EVERY BIT OF THE EDUCATION I GOT AT LETHBRIDGE COLLEGE IN MY NEW CAREER."

“Mine is likely not a typical story,” Romeril admits. “Rarely do you write your very first book and not only get an agent, but get it published.”

Romeril may be humble about her road to success, but her friend says it comes as no surprise. “Chris is a very goal-oriented person and when she sets her mind to something, she will certainly achieve it,” says Seaborn. “Of all the years we’ve known each other, I have never doubted her for a moment.”

Now, Romeril is writing the second novel in her cozy mystery series, having recently secured a contract for the sequel. And while she doesn’t know exactly what the future holds, she says two things are certain: she will keep writing and she will always be grateful for her college experience.

“Being an author in today’s world means you’re not only a writer, you’re also an entrepreneur,” says Romeril. “In addition to English skills, you need marketing, management, computer and accounting skills. I use every bit of the education I got at Lethbridge College in my new career.” 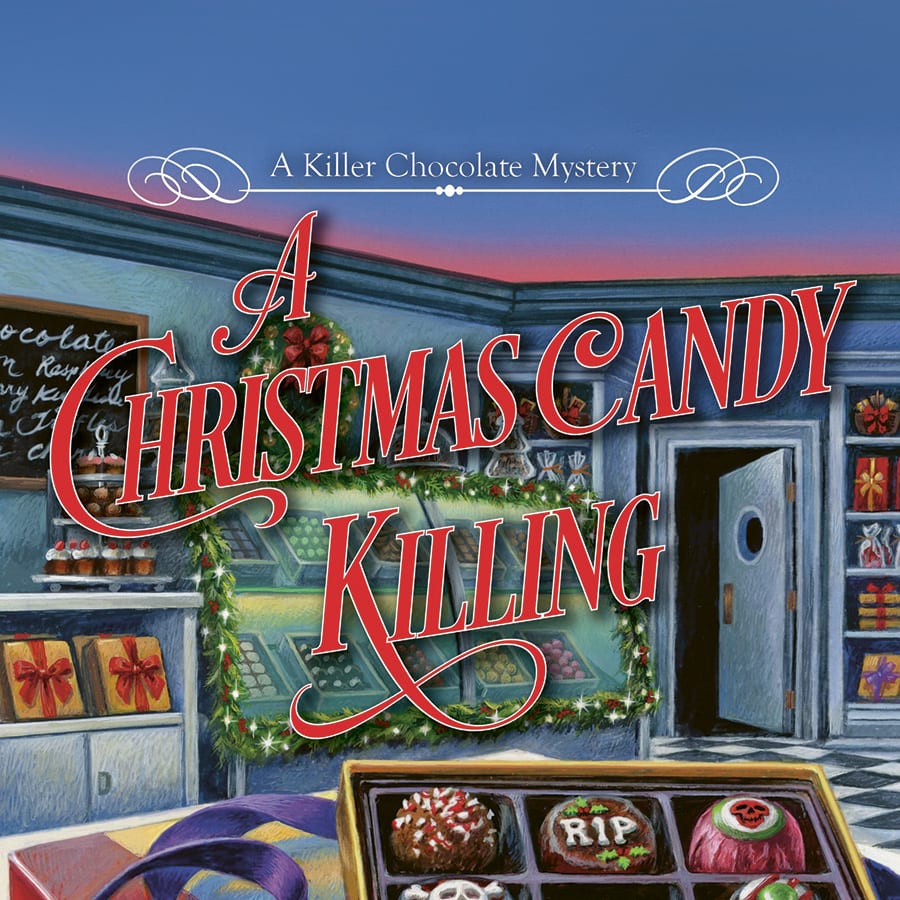 Only Jane stayed behind, and Alex wondered if she was about to be chastised for not paying attention; that
had happened often enough in school when she was growing up in Michigan. Barely of average height, Jane had an imposing presence that could just as easily corral a roomful of grown men as a class of elementary school children and commandeer them into singing Christmas carols or completing a despised service project. Her short, gray hair was sensibly styled, and closing in on eighty, she still had a penetrating gaze that could see a lie a mile away. It was these qualities that had made her such an excellent fourth-grade teacher for more than thirty-five years.

“What a wonderful way to end the year. It seems fortuitous that we finished with The Wizard of Evesham. Though I must admit, I am a tiny bit disappointed I missed the horticultural meeting tonight. Of course, book club certainly has its compensations.” Jane’s gaze traveled to the other room, where two hunky members of the club, Zach and Everett, were chatting as they munched on chocolates.

Alex looked at the fine male specimens and had to agree.

Jane was a driving force in the community, spearheading many of the events in the village. She was also president of both the horticultural and historical societies in Harriston. Jane gazed fondly at her surroundings. “You know, dear, I hate to sound sentimental, but I’m very grateful you moved to our little village and opened Murder and Mayhem.”

The specialty bookshop was devoted almost entirely to mystery novels as well as the handmade, poison- themed chocolates. Hanna, also the store’s co-owner, was primarily in charge of the time-consuming process of making the hand-dipped and molded chocolates.

Jane laid her hand on Alex’s arm. “It has also been such a blessing having you visit me every month. Your friendship has meant a great deal to me. I don’t know what I would have done without you. Before you came along, the most exciting part of my day was counting the liver spots on my hands. You’ve helped bring meaning back into a washed-up old teacher’s life that had become quite dull.”

“I don’t buy that for a second, but thank you for the sentiment. I’m the one who should be grateful. If you hadn’t taken me under your wing and been such an avid supporter when we first opened, Murder and Mayhem might not still be around. I love our visits as well.”

Jane pulled her closer. “Speaking of which, would you be able to come over tomorrow morning for some tea and a little visit?”

“Of course. I’ll get Hanna to open the store. What time would you like me there?”

“Eight. I can have everything ready by then. I watched one of my true-crime shows recently.” With a furtive glance toward the others, she led Alex back into the conference room and lowered her voice.

“It was a reenactment of a cold case. I’m certain the killer is living in our village.” She raised her palm to Alex. “Now I realize I’ve said this before, but I am really quite certain this time. I’m not unaware of the reputation I’ve developed due to a few errors in judgment. Upon mentioning my theory to Netta Griffin, she had the impertinence to laugh for several minutes. I want you to know, the photograph alone didn’t form the base of my conclusion this time. In fact, the picture they showed on television was quite useless. It was more than a little out of focus and at least seventeen years old, but something in the details of the story and the character of the killer reminded me of someone here in the village.” Her body tensed, and she grasped Alex’s arm with small but strong fingers. “The individual is suspected of four murders, the last over ten years ago. I want you to watch the episode and tell me what you think.”

Copyright © 2022 by Christina Romeril. All rights reserved. Published with permission from Crooked Lane Books, an imprint of The Quick Brown Fox & Company LLC.