Heading back to the classroom several years after high school is not the most common route to a post-secondary education, but it’s becoming more popular – at least at Lethbridge College. Data shows the number of mature learners at the college has grown from about 20 per cent in 2013 to between 22 and 23 per cent in recent years. Some of the most sought-after programs for students 30 years of age and older include Educational Assistant; English as a Second Language; Early Childhood Education; and Police Cadet Training.

While mature learners return to school for various personal reasons, many share the common thread of family inspiration.

For John Gil, an international student from Colombia, the goal was a fresh start and a better life for himself, his wife and two children. He knew moving to Canada to study English as a Second Language – and later, Environmental Assessment and Restoration – would lead to greater opportunities down the road. Now, as he works toward his Bachelor of Ecosystem Management degree, his teenage daughter, Daniela, is beginning her Business Administration diploma program. She, too, has big plans for the future, and she is eager to get started at Lethbridge College.

Lana Handsaeme and her daughter, Alley, didn’t share the same campus hallways as the Gil family will, but they do have one major college experience in common: they both earned Agriculture Sciences diplomas – and just two years apart.

Handsaeme says she was inspired by her daughter and all the knowledge she gained at Lethbridge College, so she followed in her footsteps and enrolled. Two years later, Lana and Alley Handsaeme are putting their diplomas to use on their fifth-generation family farm north of Lethbridge, implementing new ideas and techniques for future growth.

The road to a certificate, diploma or degree for mature learners is often a challenging one but supports are available. From one-on-one meetings with a recruiter or advisor, to campus tours or schedule adjustments, the Student Affairs team, as well as the greater college community, is ready to help. They’ll all say the same thing: that most important step is reaching out and hearing about the options, because you might be surprised to learn, you’re ready.

FROM COLOMBIA TO CANADA – A FAMILY OF INTERNATIONAL STUDENTS FINDS A HOME AT LETHBRIDGE COLLEGE.

John Gil wanted a fresh start and a better life for his family. So, in August 2017, he left his home in Bogota, Colombia, to come to Canada to study English as a Second Language (ESL) with plans for his family to join him later.

He began his studies at Selkirk College in Castlegar, BC. After completing one semester, he made his way to Lethbridge College where he continued to study ESL as well as English for Academic Purposes. By the fall of 2018, Gil was enrolled in the college’s Environmental Assessment and Restoration program.

Gil says he wanted to build on his background in electronic engineering and at the same time, focus on environmental sciences. The college’s reputation in that academic area was a big draw, as was the community itself. “Lethbridge is a big city, but not too big,” he laughs. “There are a lot of opportunities and resources here.”

The option to live on campus – including room for his family - was also a key consideration for Gil. After spending three years apart, Gil was reunited with his wife, Zoa, and children, Daniela and Santiago, in December 2020, and all four now live on campus in a family unit in the Cullen Residences.

The decision to come to post-secondary as an adult with a family – and to come to a new country – was not an easy one. “It’s really scary to be a mature learner,” Gil says, “especially as an international student. I had to adapt to a new environment, at first without my family here. People are kind and I found some friends, but it’s a process.”

It wasn’t always easy. Gil says he had to overcome many financial, academic and mental health challenges along the way. “I struggled to improve my English skills,” he says. “And I ran into paperwork issues when registering for the program because I had finished high school so long ago.”

At the time, Dr. Terry Kowalchuk, Dean of the Centre for Technology, Environment and Design, was chair of the college’s School of Environmental Sciences. Gil says he met with Kowalchuk to share his concerns and his plans for the future. “He believed in me and my goals,” Gil says. “Dr. Kowalchuk and members of the ESL team, including then-director Scott Lehbauer, helped me overcome my obstacles and ensured I was ready to move forward with my education.”

Opting to complete his program over four years, Gil has had the unique experience of studying, working and living on campus longer than most. He’s spent time as a research assistant in the college’s Aquaculture Centre of Excellence learning from John Derksen, chair of the Aquaculture Centre, and Dr. Nick Savidov, a senior research scientist. Most recently, Gil has been working with the Centre for Applied Research, Innovation and Entrepreneurship Mueller Irrigation Group under the supervision of Dr. Willemijn Appels.

Gil says soil science and the impact of weather on agriculture in Alberta is work he hopes to continue doing well into the future.

“I’m so grateful for the growth and enrichment the college has provided me,” says Gil. “The infrastructure, organization and professionalism of faculty and staff have inspired me to go further with my studies. I want to use my knowledge to help protect the wellbeing of the environment here in Canada.”

Now, Gil has set his sights on a Bachelor of Applied Science in Ecosystem Management – a journey that will place him in the same hallways as his teenage daughter, Daniela. She’ll start in the Business Administration program this fall with the goal of becoming the creative director of her own clothing line. “Fashion school is so expensive,” she says. “But I want to start here because learning the foundation of business is important.”

A 2022 graduate of Lethbridge Collegiate Institute, Daniela says she is both excited and nervous to start this new chapter. Despite living in residence for the past two years, she admits she hasn’t explored much of the college. “I limit myself to Centre Core and one other study area,” she says. “I want to discover new things and find surprises along the way, just like every other new student.”

She’s also eager to take on more responsibilities and make new friends. And naturally, Daniela craves her own college experience, separate from her father’s. Because of that, Gil says he will give her space. He jokes though, that avoiding members of his family at school might become increasingly difficult, as Santiago is interested in the Geomatics Engineering Technology program and he could enrol as early as next fall.

For Gil, the sense of belonging and hope for the future is the result of taking a leap five years ago. “I moved to Canada to try to improve the quality of life for myself and my family,” he says. “Choosing Lethbridge College has been one of the most important decisions of my life.” 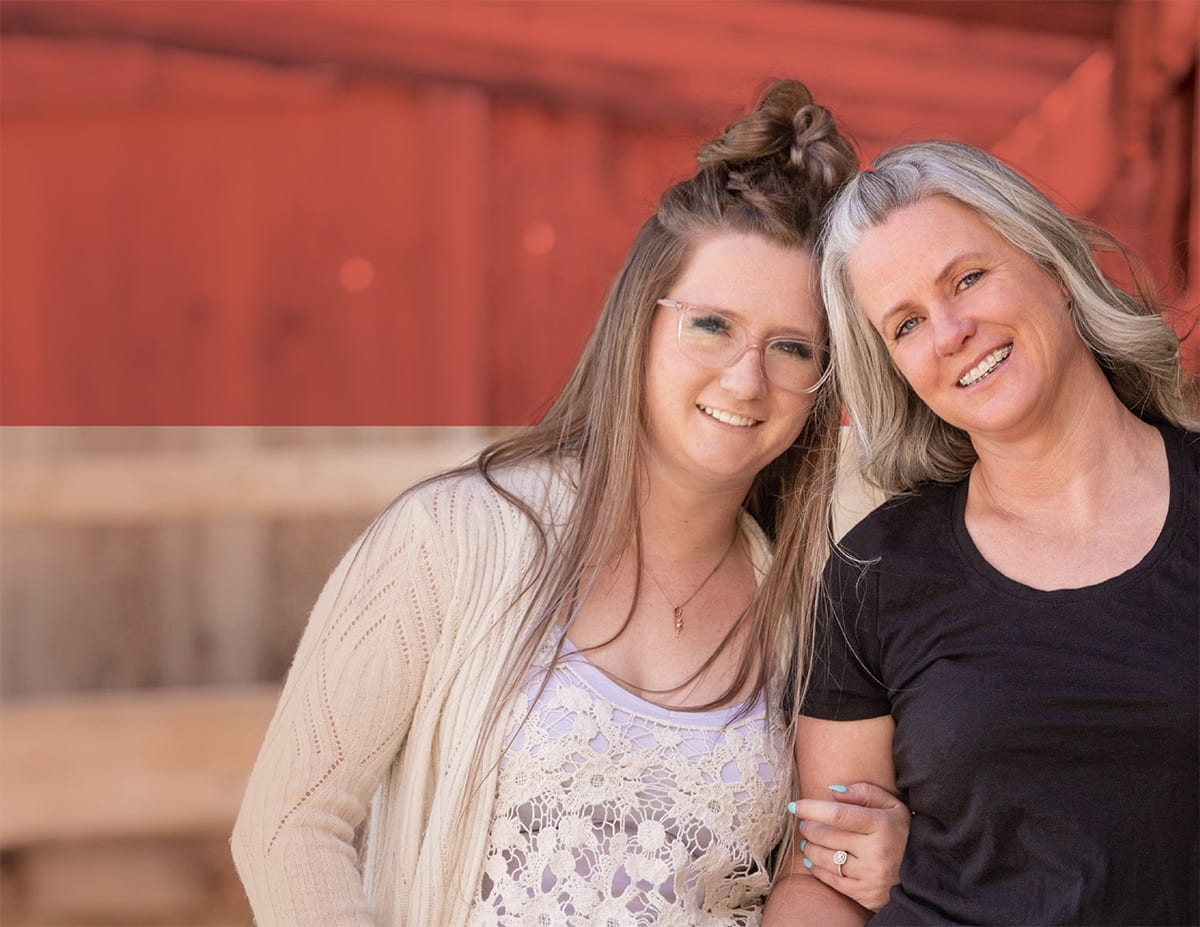 Citing her daughter as her inspiration, mature student Lana Handsaeme recently graduated from Lethbridge College’s Agriculture Sciences program with a major in agronomy.

A self-described “city kid,” Handsaeme says her hands-on education began when she moved to her husband’s family farm north of Lethbridge. “I sort of did things the opposite way,” she says. “I got married and had kids really early. I helped out on the farm for years but once the girls were older and more self-sufficient, I decided I wanted to expand my knowledge.”

Handsaeme says she was motivated by her daughter, Alley Handsaeme, who graduated from the Agriculture Sciences program in the spring of 2020. “Seeing her working in the field and all the knowledge she gained, she kind of became my idol.” Two weeks before the start of the fall 2020 semester, as combining on the farm was just getting underway, Lana Handsaeme visited the Lethbridge College website and enrolled. Classes had moved online because of the pandemic so she planned to work on her diploma while continuing to help with the farm. “I registered myself and didn’t think twice about it,” she says. “And I didn’t tell my family until the week school was starting, so it was a surprise to everyone!”

After beginning the Agriculture Sciences program online, Handsaeme was able to return to campus for her final semester in January 2022. As a mature student, she recalls being nervous to learn alongside others who were about half her age. That uneasiness faded quickly though. “I was calling them ‘my kids’ because they were the same age as my daughter,” Handsaeme says. “They were very receptive to me, and we did a lot of great work. We learned from each other, and it worked out really well.”

Handsaeme completed her two-year diploma program, in-person, this past May.

“I’m so happy for her,” says Alley Handsaeme. “She showed interest in my college education, so I was glad to see her take the opportunity for herself. Now she bounces ideas around with my dad and has the confidence to get more technically involved in operations. We have a small family farm, so her extra knowledge is really beneficial.”

Lana Handsaeme also views her post-secondary education as an important part of succession planning. “My daughter’s focus is on agronomy, and my interest is in precision agriculture,” she says. “So, between the two of us, we can help ensure our fifth-generation farm continues on.”

Precision agriculture relies on a wide range of equipment and technology to gather data that can be used to improve yields and reduce costs. Handsaeme admits it’s something their farming operation has been lacking, not because they weren’t interested in it but because they didn’t know how to get started. That’s all in the past now.

As she works to implement precision farming techniques at home, Handsaeme also spends time at Vanee Farm Centre where it’s her job to help other area producers do the same. Her days are busy but rewarding. “You know, mature students hesitate to go back to school, but I would encourage them to do it,” she says. “Age is just a number, and you can never learn enough.”

SUPPORTS FOR MATURE LEARNERS AT LC

While the prospect of going back to school as a mature learner is often exciting, it can also be stressful and overwhelming. That’s why the Lethbridge College Student Affairs team is ready to help alleviate those anxieties and offers support designed specifically for mature students. Details about those supports can be found on widerhorizons.ca. And to explore LC programs, book a campus tour or connect with an advisor, visit lethbridgecollege.ca/future-students.