A new Lethbridge College Virtual Reality (VR) experience will enable visitors to the Grande Cache Tourism and Interpretive Centre in the Municipal District of Greenview to follow in the footsteps of dinosaurs.

The Grande Cache Dinosaur Track site, located on the edge of the Rocky Mountains northwest of Edmonton, is the only large-scale exposure of dinosaur tracks known in Canada. An estimated 10,000 individual prints belonging to several different dinosaur species have been found at about 25 different sites in the area.

Most of the prints at the site came from two species who called the region home during the Cretaceous Period – the hulking, armoured, plant-eating Sauropeltas and the small- and medium-sized two-legged meat-eating Acrocanthosaurus. These lizards traversed the lush shores of a giant inland sea that covered much of what is now the Prairie provinces, leaving traces of their passing in the form of footprints in the mud. The tracks, which were preserved under layers of rock, remained undiscovered for more than 90 million years until open-pit mining operations in the area stripped away rock layers to reveal them in the 1980s.

Due to geological upheavals over the past several millennia, the tracks are located on steeply angled cliff faces that are almost totally inaccessible to the public, which is where Mike McCready, the college’s President’s Applied Research Chair in Virtual and Augmented Reality, and his team come in. The Grande Cache area “has this site with amazing tourism opportunities, but they can’t bring people to it because of logistical and safety concerns,” explains McCready. 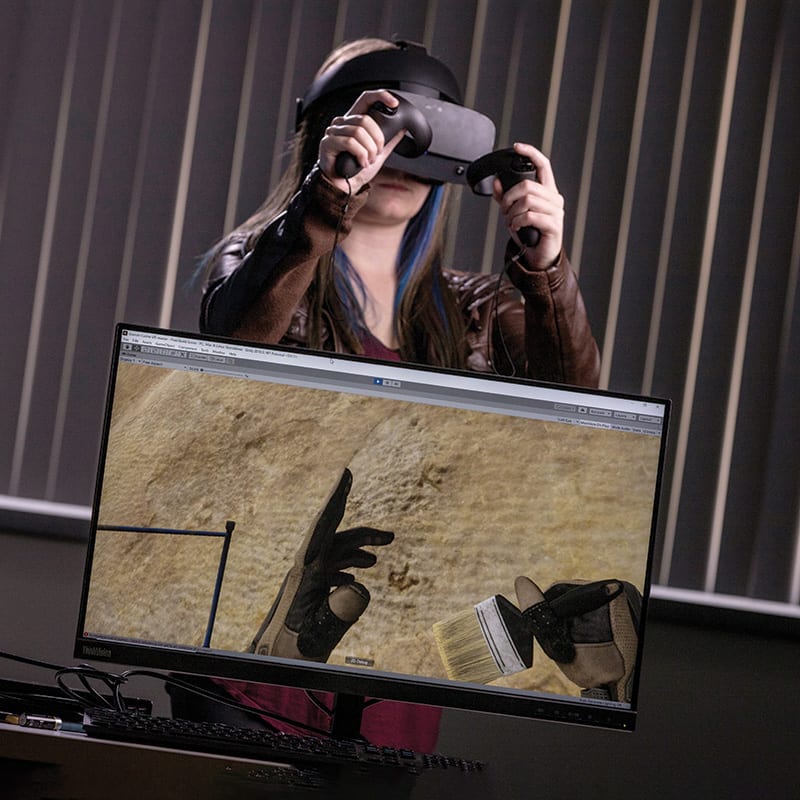 So instead of bringing people to the tracks, McCready and his team, which includes college instructor and researcher Allyson Cikor and VR/AR program graduate Benjamin Blackwell, are bringing the tracks to the people. By using photogrammetry and laser scanning to capture close-up and detailed imagery of the dinosaur tracks, the team has created an immersive VR experience combining 360-degree imagery, spatialized audio and guided narration that enables visitors to experience the tracks and hone their paleontology skills with virtual activities – all without leaving the Grande Cache Tourism and Interpretive Centre.

The project, which is funded in part through a $18,000 grant from the Community and Regional Economic Support, also includes an Augmented Reality (AR) piece developed by VR/AR student Alex Mayer. The AR part of the project enables visitors to see how the tracks were made by overlaying digital content over the real-world site using Snapchat filters.

In June, McCready and Cikor presented the project to the VR/AR Global Summit 2021 – North America, garnering international attention for their work. “We had a number of people reach out to us after our presentation to ask us about using technology to digitally recreate other heritage sites,” says Cikor.

Jenny Daubert, Tourism Supervisor for the MD of Greenview, says the plan is to publicly launch the VR experience in early September (right as Wider Horizons goes to press). “We’re super happy with what we’ve seen so far,” she says. “The Walking with Dinosaurs VR project is a very exciting opportunity to share this historical site with the public in a fun immersive learning experience. The team from Lethbridge College is extremely talented, and they have exceeded my expectations in their ability to recreate the Dinosaur Track site.”

To get more information about the Grande Cache Dinosaur Track site, go to experiencedinosaurtrails.com. To learn more about the college’s Spatial Technologies Applied Research and Training (START) program, go to lethbridgecollege.ca/start; email virtualreality@lethbridgecollege.ca; or call 403-320-3468.