The early morning sun dances on the green-brown water of the Oldman River as a light breeze stirs ripples across the surface. On the shore just downstream from the Whoop-Up Drive overpass, a small group of anglers bait hooks and cast lines into the water in hopes of reeling in lake sturgeon. It’s an idyllic scene on an early summer day, but for the group, including Lethbridge College researcher Kristine Wilson and four summer students from the college’s School of Environmental Sciences, this is work. 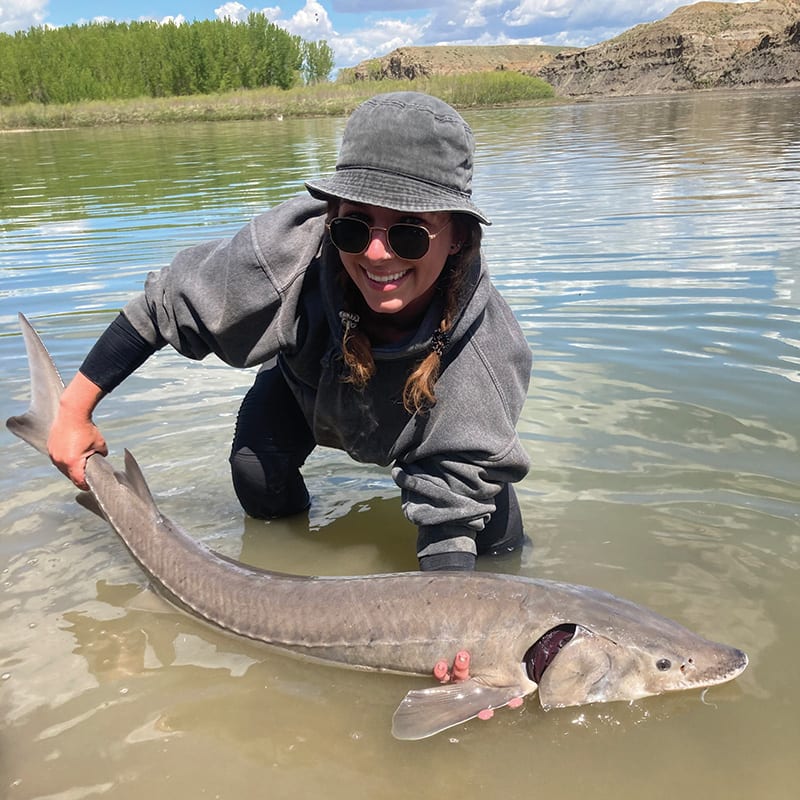 Wilson and her team are part of a research project from Lethbridge College’s Aquaculture Centre of Excellence (ACE) assessing the risk and prevalence of herpes viruses in wild populations of lake sturgeon in the South Saskatchewan  River basin.

With their torpedo-shaped, armour-plated bodies and pointed snouts, sturgeon resemble something from prehistoric times and for good reason; the fossil record shows they lived alongside dinosaurs as far back as 85 million years ago and they haven’t changed much since then. Not only are they an ancient species, but individual sturgeon can also live as long as 150 years, with young fish reaching full maturity after 15 to 30 years. 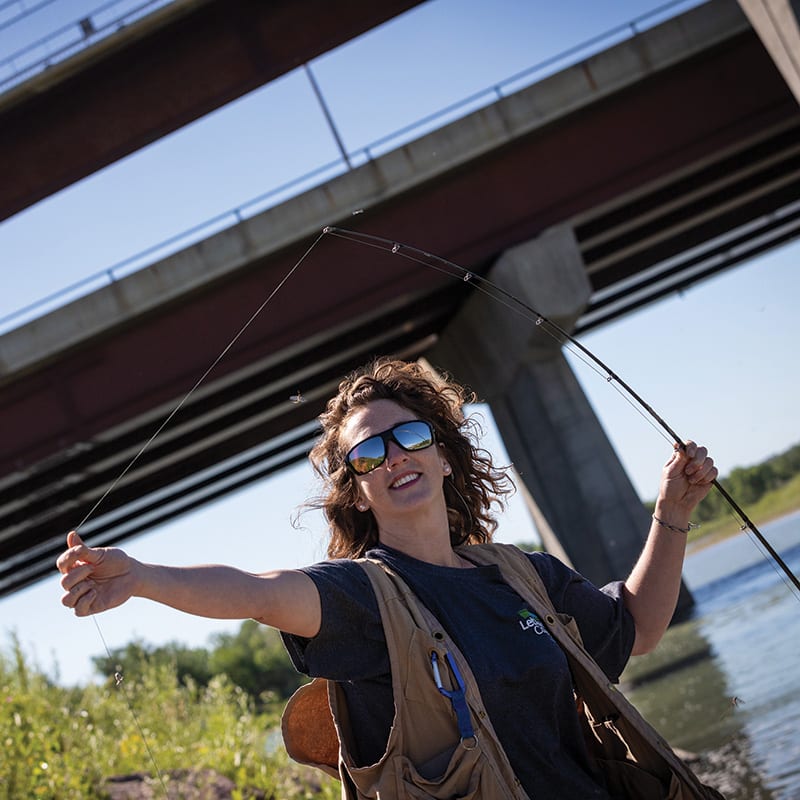 Today, sturgeon populations in the South Saskatchewan River are designated as endangered by the Committee on the Status of Endangered Wildlife in Canada. They are currently being considered for listing under the Species at Risk Act and are listed as Threatened under the Alberta Wildlife Act. Sturgeon management and recovery plans have identified herpes viruses as a threat to conservation efforts, but the risk is difficult to assess given the lack of information on the types of viruses and their presence in wild populations. The team from ACE is hoping to fill that gap this summer by catching sturgeon, collecting tissue samples from their fins and sending them to  Fisheries and Oceans Canada for testing.

That sounds simple, but when you’re dealing with the largest freshwater fish in the Northern Hemisphere, sturgeon fishing can be easier said than done.

“I caught one on the other side of that bridge last week that was more than a metre long,” says Wilson, pointing upstream from her fishing spot. “It took me 15 minutes just to get it to shore and then I tried to guide it into the cradle. It was not ready to come in and snapped the hook right off. I was left there with my arms and body aching, a bruise on my stomach from holding the rod and no fish.”

While the research project will hopefully lead to a greater understanding of the viruses affecting sturgeon in southern Alberta, John Derksen, chair of the ACE and co-lead on the sturgeon sampling project, says the ultimate goal is to pave the way for using sturgeon in commercial aquaponics, in which fish, plants and beneficial microorganisms are grown together in an integrated system.

“In commercial aquaponics, 80 per cent of your revenue is going to come from the produce you grow, and the fish are secondary,” explains Derksen. “Because sturgeon are slow growing and don’t mature for 15 to 20 years, they are a good long-term investment, because you don’t have to separate the sizes when they get too big and you don’t have to worry about finding a market for the fish.”

Derksen said the ACE team is interested in bringing in farmed sturgeon from British Columbia, but the research project needs to determine that the farmed fish won’t carry any diseases that wild domestic fish don’t already have. He adds that the ACE team has already received inquiries from interested commercial aquaponics operators including Granary Road Learning Park and Farmer’s Market outside of Calgary. Granary Road and Lethbridge College have already partnered on a demonstration project showcasing an aquaponics system, and they have also worked together to produce plant food using by-products from the aquaponics process. Derksen says their vision is to increase public awareness of this endangered species, enhance thec ompetitiveness of the sturgeon aquaculture industry in Canada and showcase aquaponics as an environmentally sustainable, economically feasible approach for rearing sturgeon for caviar. 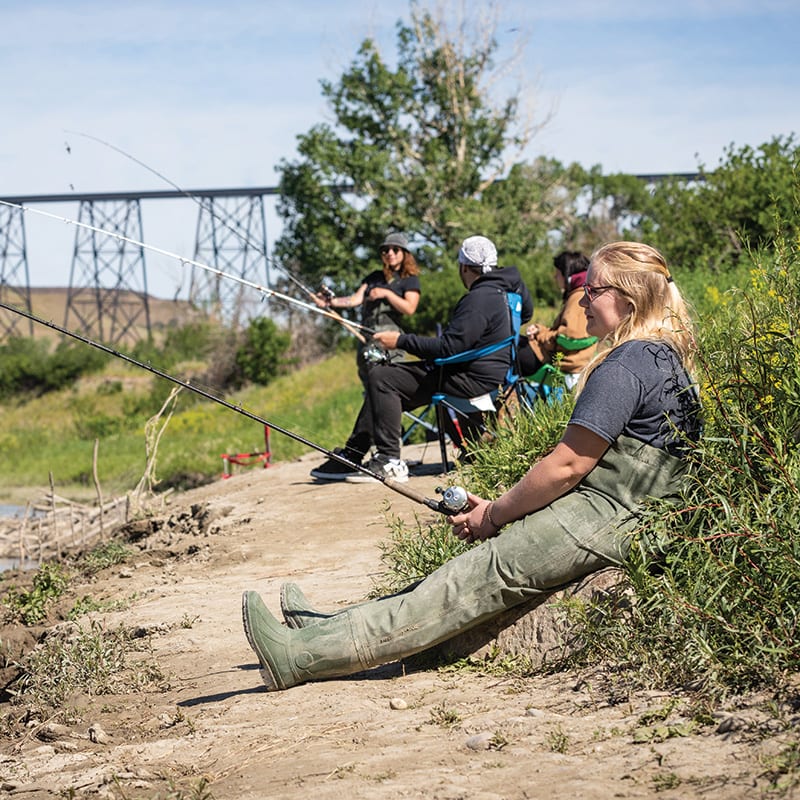 Back on the river, the fish aren’t biting (though Wilson does collect a six-inch long crayfish), but the team—including summer students Abigail Doerksen, Dongjin Kim, Kira Sawatzky and Joel Smith—are in high spirits.

“I went to school for three years before this, and I did a lot of classes, but the experiences I have had through this program are much more exciting than sitting and typing on a computer,” laughs Doerksen.

Sawatzky, a fourth year Bachelor of Ecosystem Management student, joined the team because of her interest in aquatic ecosystems, but she had rarely picked up a fishing pole before this summer.

“Honestly I didn’t even know about the ACE until this year when John brought a bunch of us in for an experiential week there,” she recalls. “And I didn’t actually know what I was going to be doing with this project because I was mostly interested in insects and other invertebrates, but when I learned more, I was really intrigued. This project has really honed in my fishing skills and understanding of sturgeon migratory paths.”

For Doerksen, who is entering her fourth year in the Ecosystem Management program, the project was a chance to get further exposure to fish research.

“I was taking fisheries management with John and talking to him about how I wanted to get into the fisheries field. I asked if he had any research opportunities that he needed student help with that I could use for my senior project, and he emailed me a couple of weeks later about this opportunity at ACE,”  she explains. “I got really into fishing last year and decided that I wanted to do it for a career, and getting this experience has been absolutely incredible. It’s cool to be part of an actual research team. I’ve learned a lot, like how to test if a sturgeon is spawning or not, and how to take tissue samples, and of course it’s fun just being able to fish for work.” 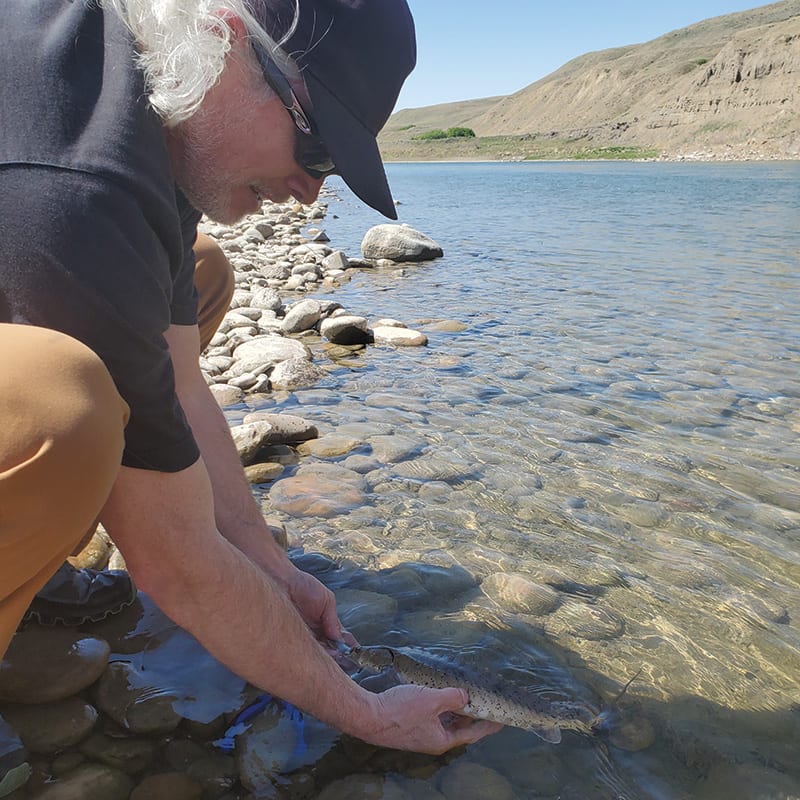 It turns out that while landing the bottom-feeding behemoths is one challenge for Wilson and her team, simply finding them is another. Sturgeon can be elusive, especially when the river water levels are low, and they congregate in deeper pools further from shore. The team has ranged all over the Old Man River from multiple spots in Lethbridge to the Grassy Lake Forks fishing area to Medicine Hat, and members have even tapped into the expertise of southern Alberta’s sport fishing community for tips about where the fish are biting. As of late July, the team had only managed to catch and sample 54 sturgeon, less than half of the 180 they are looking for. But as the morning turns to the afternoon and air grows warmer, there is definitely the feeling that no one would mind if this job lasted all summer long.