“Last year, it was about this time, we went up to the north part of the reserve and we found a ma’s plant, a wild turnip. For me, the turnip plant is really an important plant. This plant here is our connections to the stars.”

So began one of William Singer III’s stories, educating and illustrating the lessons waiting to be learned in the literal backyard of Lethbridge College – the coulees. 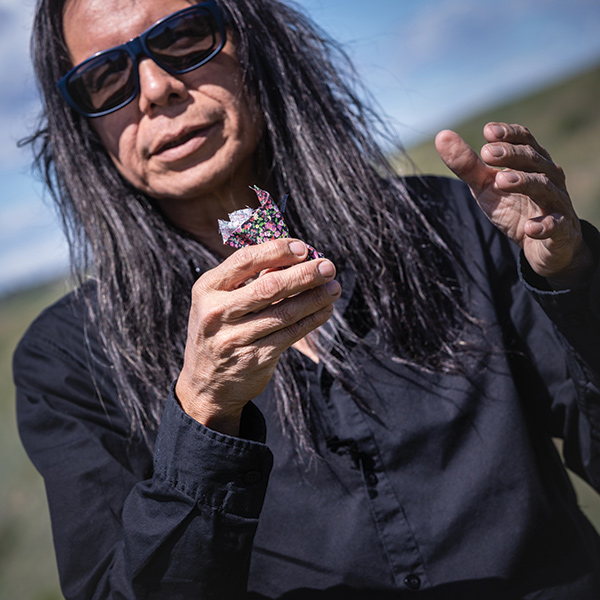 Gently holding the leaves of the plant between his fingers, Singer (Api’soomaahka – Running Coyote) explained how the wild turnip plant is part of a bigger story. It started, he said, when a woman fell in love with a man who lived in the heavens and went to live with him there. “Every day they would dig up turnips,” he said as the soft wind blew and his dog, Zorro, romped up and down the hills. “One day, the woman found a ma’s plant that was bigger than the rest. Her husband told her to leave the plant. But on the next outing, the woman dug it up and rolled it out of the way. In that hole she could look down to the earth and see her camp and all her people – and when she saw them, she got lonesome.”

Singer paused, looking at the small plant leaves still in his hands. “When he returned home, the woman’s husband knew what she had done, and knew she was lonely. So he said he would return her back to her home. Through that hole, he put a rope made of sinew to lower her down. But before she left, the spirits gave her a medicine pipe to take with her to her homeland. And the man lowered her back to the earth and her family.”

The hole the turnip left is a star still visible today – it’s the fixed star also known as the North Star. Another familiar star in the sky shares the name of the woman’s husband, Iipiso-waahs, the Bright Star or Morning Star. These stars, the plants in Singer’s hands and all of us, Singer concluded – we are all connected.

When Singer walks through the coulees behind the college, he doesn’t just see a geologic formation that defines a city. He sees all the tools needed for an education – history, science, storytelling and everything needed to live a healthy life.

And together with Indigenous Services manager Shanda Webber (Naamoipiiksii – Hummingbird) and Centre for Applied Arts and Sciences Indigenous Coordinator Marcia Black Water (Iito’tawoahkaakii – Walking Beside) – as well as colleagues from the college’s A/V and Communications team – Singer is helping the college create an online tour of the traditional plants found in the coulees, a resource that could be shared by all students, alumni, employees and friends of the college.

“The day we spent with William in the coulees had an emotional element to it,” says Black Water. “Being raised with my Blackfoot ways, I know the significance to the turnip root. It is not my place to talk about it, but what William has shared with us is the story we are able to share. My mom would always remind me how the turnip looked; she would say the plant hides and will show itself to you for a reason. I found two turnip plants on our Plant Walk with William, and I would say the moment was meant to be.”

Black Water adds: “With the Plant Walk project, it was another way we could get our college community and Lethbridge as a whole to be able to access learning about Blackfoot lands and what it has to offer. We are always stressing at Lethbridge College that we want to be more than a territorial acknowledgement; we want to connect with the land and learn from what it has to offer, hearing the teaching through stories from the Blackfoot community members like our Grandparents and people like Api’soomaahka.”

The Plant Walk, Black Water concludes, is just the beginning, and she looks forward to working with different college areas to expand it, including students in the Environmental Sciences programs. Some of the work had been planned for this summer but had to be postponed because of COVID-19.

Singer is well known to the Blood Tribe community for being a knowledge keeper and expert of traditional plants and their uses. He looks to the outdoors as the ideal classroom for learning Niitsitapiipaitapiiwahsini – the Niitsitapi Way of Life. In the video, which can be seen at learn.lc/IndigenousPlants, he shares some traditional stories and identifies local plants and grasses in the coulees, sharing their Blackfoot names and traditional uses.

The coulees are filled with natural flora that can sustain people, and Singer introduces viewers to wild turnips and wild onions to eat, licorice root to quench thirst, and so many plants and herbs to heal. In the Blackfoot worldview, Singer explains, “warriors still exist. It’s a warrior’s duty to protect the land and to know the land and all of its stories. Now we have to protect the land, because the land protects the people.”

The college shared the video with employees on National Indigenous Peoples Day in June – a day when the campus usually comes together to celebrate. Since that was not possible this year, Webber said, “we talked about how we could encourage people to embark on their own lessons and understanding of what it means to be living on traditional Blackfoot territory.

“The land sustains us all,” she added, noting that in the year ahead, shorter videos, photos and Blackfoot language lessons will also be added to the website. “It sustains the college. And we want to start talking about how we – as individuals and as the college – are connected to the land. We then can talk about what steps we can take to start developing our own story about what it means to be a resident of traditional Blackfoot territory, and how we are connected, and how we can work toward reconciliation.” 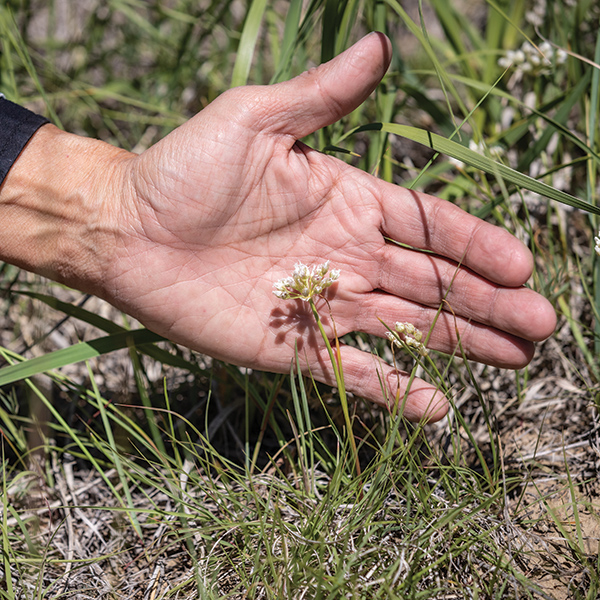