As part of his $100,000 gift to Lethbridge College, philanthropist Bruce McKillop wanted to create a new speaker series to educate attendees, engage the community and provide opportunities for thoughtful dialogue on important issues, in an intimate setting providing a unique experience for participants.

Frum treated students and the public to a thought-provoking discussion of an issue being debated at kitchen tables, both here in southern Alberta and around the globe. His topic could not have been more timely – the changing political landscape and the rise of populism.

Originally from Toronto, Frum is a writer at The Atlantic and the author of the 2018 New York Times bestseller, Trumpocracy: The Corruption of the American Republic, his ninth book. In 2001 and 2002, he served as special assistant and speechwriter to President George W. Bush during and after the Sept. 11 attacks on the United States. He is a sought-after political commentator as a conservative Republican who is an outspoken critic of President Donald Trump.

Frum met with students from the Centre of Applied Arts and Sciences during his morning visit to campus. That evening, he spoke before a sold-out crowd in the Instructional Building, offering a stark and sharp discussion on the rise of populism that was not just confined to U.S. President Donald Trump but extended to European powers and beyond.

He also made time for lunch with members of the Wider Horizons team. Amid the clatter of the Garden Court Restaurant’s end-of-semester buffet prepared by Culinary students, Frum shared more insights and inspiration on citizen engagement, higher education and the importance of personal and professional second acts. An edited version of that conversation follows.

Look to the winter issue of Wider Horizons for details about the 2020 speaker series date and topic. We can’t wait to have you join the conversation.

Wider Horizons: Lethbridge College launched its new brand last fall, focusing on the idea of being ready, because what happens next matters most. With all the changes that are happening in the world today, what do you think will happen next?

DAVID FRUM: Almost as a matter of principle, I decline to make predictions. Predictions invite you to imagine the future as a thing that already exists – something that can be described and evaluated. But the future does not exist, not yet. You’re going to make it. Don’t ask me to tell you what the future is going to be. It’s on you. Human beings make individual ethical and political decisions. Depending on whether more conscientious or less conscientious people get the upper hand, the outcome will be different. So if you have enough breath to be able to ask, "What will happen?," that’s enough breath to get into the middle of the action and actually be a contributing participant.

Wider Horizons: You are known as one of the few vocal conservative critics of U.S. President Donald Trump. Your latest book, Trumpocracy, is described as a warning for democracy and discusses how Trump has undermined important institutions in ways even the most critical media has missed. Can you share a few insights from that work and from what you see happening in the United States now?

DAVID FRUM: The perverse gift of Trump – I end my book Trumpocracy with a section on the unexpected gifts of Trump – is that there are some good things that he’s done unintentionally – and one of them is to make us aware of and appreciate the fragility of some of the American institutions now under attack. And because Trump's also lazy and inattentive, he often fails to do the damage that he wants to do. That may turn out to be a blessing in disguise because he’s exposed the points of vulnerability without having the strength to use those points of vulnerability as fully as he could. 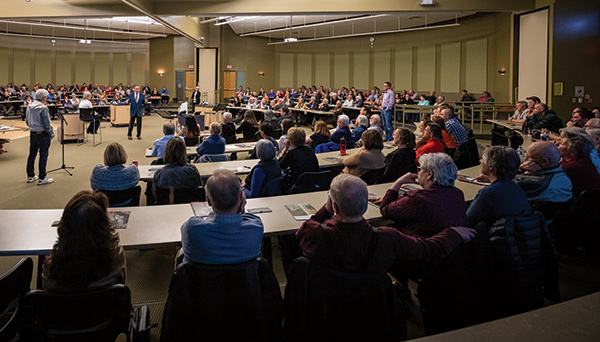 Wider Horizons: What are your thoughts on the role of higher education in our world today? What advice would you give to students starting their college careers?

Wider Horizons: Many students come to Lethbridge College later in their lives – maybe they are switching careers, looking for new opportunities or needing a fresh start. Was there ever a time in your life that you started a second act?

DAVID FRUM: Second act? I'm on about my fourth or fifth! When the financial crisis hit in 2008, I was working at a conservative think tank. I urged the most active possible response to the crisis: monetary stimulus, income support, generous unemployment insurance. To its credit, that is very much what the Bush administration did in its final months, October 2008 to January 2009. And the Obama administration followed many similar lines of policy after it took office in January 2009. The financial systems stabilized after 2009. The rest of the US economy recovered much more slowly. Unemployment remained terribly high until 2013-14. Many people, especially blue-collar men, quit the workforce and never returned.

During those hard years after 2008, I came to believe that it was time for the U.S. to extend some kind of universal healthcare guarantee. Most Americans get their healthcare from their work. When work is scarce, they lose their coverage. And work was scarce for years. So I wrote a lot in 2009 and 2010 about the need for Republicans to work with the new administration on a health care bill. That advice was not heeded, obviously – but the Obama health bill passed anyway.

So when the most crucial vote happened in March 2010, I posted a short piece to a website I was running about the wasted opportunity. My site normally got between 15,000 to 25,000 visitors a day, but that day, we got over a million visitors before the server crashed. I was denounced by name in the lead editorial of the Wall Street Journal, a place I used to work, by a person I used to edit. And I got fired from my think tank. At the time, I was highly vexed. But as I look back on it, it was a very personally liberating moment. I came to see the moment as an emancipation. I was given permission to rethink many things, to say things that my previous job would not have allowed me to say. I've done better work since – and I'm grateful for the shock that freed me to do that work.

THE ORIGINS OF THE SPEAKER SERIES 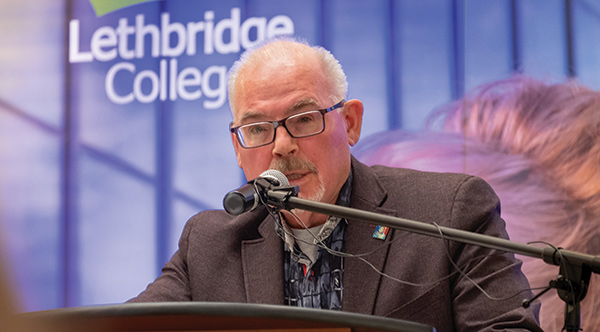 The Wider Horizons Presents… speaker series is made possible thanks to a $100,000 gift from long-time Lethbridge businessman and philanthropist Bruce McKillop. The owner and operator of McKillop Insurance and Registry Services for more than 45 years, McKillop took over the business from his father, Bud, who founded it in Lethbridge in 1953. Now retired himself, McKillop has turned over the reins to his daughter, Sonya, making it a third generation family business.

McKillop is an alumnus of the University of Lethbridge, and he took classes in the university’s early days when it was located on the Lethbridge College campus. One of the reasons he decided to make this gift to the college was because he sees the value of supporting all postsecondary education in the city and wanted to help highlight the educational choices at the college.

“We’re thankful to Bruce McKillop for stepping forward to make this project a reality,” says Lethbridge College President and CEO Dr. Paula Burns. “He believes in a culture of philanthropy and finding ways to support initiatives he believes in, which is an example to the entire community.” The naming of the speaker series builds off the reputation of the college’s award-winning Wider Horizons magazine, which for 13 years has shared thought-provoking and inspirational stories of Lethbridge College people, places and ideas with the college’s vast network of alumni, community and industry supporters.