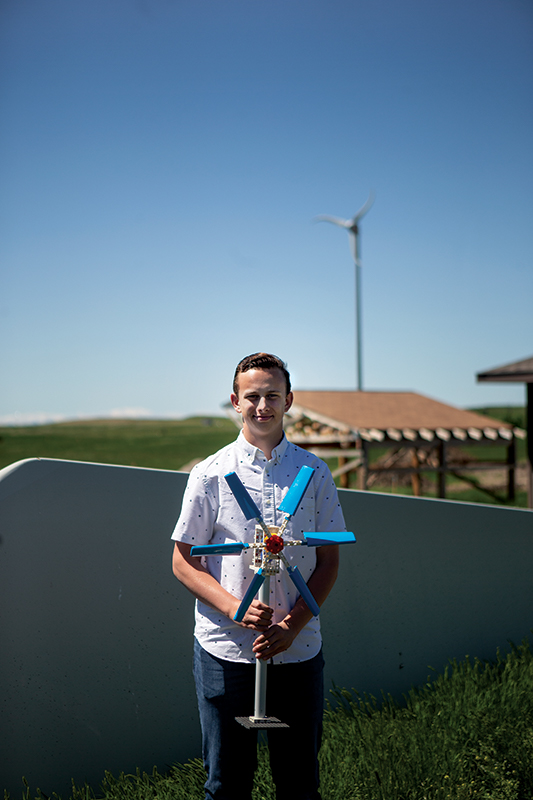 On many southern Alberta roads, you can hear the familiar hum of an energy-producing wind turbine in the distance. For 15-year-old Foremost student Jordan Kurtzweg, the sound of the turning blades ignited a cerebral spark.

“They are considering building a wind turbine farm in my area, and when I heard that, it immediately got me thinking about the science side of it all,” Kurtzweg says

So for this year’s science fair, he dove into researching the angles of wind turbine blades which would produce the most electricity, the logistics behind storing energy during non-peak times for future use and the applications of his research in various climates. The project, “A wind-win,” was a success, and he was asked to present his findings in Ottawa at the Canada-wide Science Fair in early May.

In the months leading up the national competition, the teenage innovator, who had been testing his wind theories with a household fan in his father’s workshop, reached out to instructors in Lethbridge College’s Wind Turbine Technician program for guidance. Instructors Chris DeLisle, Gordon Bourgoin and Ronald Papp were thrilled to be project advisors and invited the eager learner to campus to use the world-class facilities.

“Once we met Jordan and saw his passion, it got us excited to be a part of the project. Seeing young people take an interest in the industry always gets you fired up,” says DeLisle. “This experience showed me that just giving a small amount of time can have a significant impact on others.”

After having the opportunity to test his hypothesis in the Lethbridge College wind turbine tunnel and collaborate with his new team of mentors, Kurtzweg ventured east for the national science fair, where he was awarded a $750 renewable energy award. “To have people recognize that something I had put so much work into had the possibility to make a difference was great,” says Kurtzweg. “My findings couldn’t have been as accurate without the help of Lethbridge College.”