An innovative campaign that brought together local home builders, tradespeople and suppliers to support college students raised $804,343 over the past five years. The total was announced in June as the completion of the College Home project, a partnership between the Canadian Home Builders’ Association – Lethbridge Region (CHBA) and Lethbridge College, was celebrated at the college.

Launched in 2013, the program involved CHBA builders working with suppliers and tradespeople to build homes that were showcased and sold. Each builder then made a donation from the proceeds of the sale to Lethbridge College. Eight homes were built over five years and the final combined donations surpassed the initial goal of $750,000. The project was the first of its kind in Canada.

Proceeds from the sale of homes supported the construction of the 168,862 square foot, $77-million Trades, Technologies and Innovation Facility, which opened in September 2017. “This project is a testament to what can happen when like-minded individuals get together and create something meaningful,” says Mike Schmidtler, CHBA Lethbridge Region President. “Our industry requires advanced training that is adaptable and relevant. We are pleased we were able to partner with Lethbridge College to help create a facility that makes that training a reality right here in Lethbridge.”

Seven different home builders led builds over the course of the project. They are Ashcroft Master Builder (year one), Avonlea Homes (year two), Daytona Homes (year three), Empire Homes (year four), Galko Homes Master Building (year one), Signature Homes (year three) and Stranville Living (years two and five). In addition, 147 suppliers and tradespeople contributed to the builds, including six that each contributed more than $30,000 worth of resources over the course of the project: All Weather Windows, Challenger Building Supplies, Exteriors by Leroy and Darcy Ltd., KB Heating and Air Conditioning, Kodiak Heating and Air Conditioning/Kodiak Plumbing and Gasfitting Ltd., and Neu-Lite.

Ron LeClaire worked as a hotel owner in Picture Butte and Milo and was an active member of the Picture Butte community before he passed away in 2011. “Ron was a community-minded gentleman,” says Picture Butte Lions Club President John Koenen. “He attended absolutely everything that was going on in town – it didn’t matter what kind of activity. You could look around and you would see Ron was always there.”

The Lions Club researched many causes and institutions before deciding how to best honour LeClaire’s legacy, as the organization he had specified in his will no longer existed. “So our dilemma was how to use the money to respect Ron’s wishes,” says board member Doug Jackson. “A friend suggested a scholarship so I came down to the college and checked it out. It was a great fit to support students right here in southern Alberta who face barriers in their education due to vision impairments. You often hear people say, ‘give a man a fish and you feed him for a day; teach a man to fish and you feed him for a lifetime.’ That’s why it was important for us to partner with an institution that is giving individuals the tools necessary for success.”

That’s why it was important for us to partner with an institution that is giving individuals the tools necessary for success.

Lethbridge College students with visual impairments are supported by the campus’ Accessibility Services department, which provides students with flexible, innovative and collaborative learning opportunities by creating custom pathways to academic success. Its services support a wide range of diverse learners, including those with physical, sensory, learning and developmental impairments. The Lions Club contribution will help to support students who depend on Accessibility Services to assist in their learning journey.

Since its creation in 1917, Lions Club International has focused on aiding communities with issues of vision, hunger, the environment, childhood cancer and diabetes, and is recognized as the world’s largest service club organization. Aiding those affected by vision impairments is a special priority. The Picture Butte Lions Club members hope the gift attracts visually impaired students who may otherwise have had to travel away from home to continue their education. “We would like to see someone’s life – or many lives – improve because of this gift,” Jackson adds. 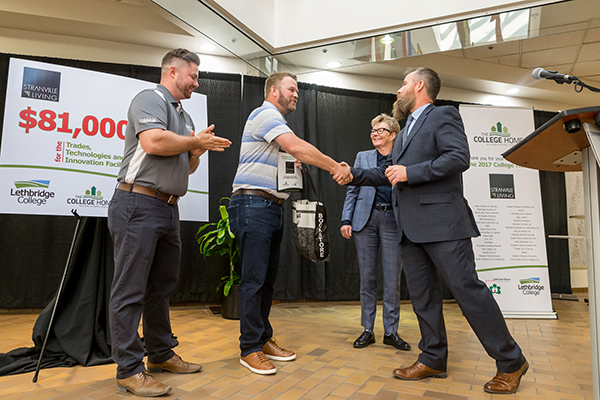 An appraiser pegged the value of a collection of mounted raptors at about $18,000, but if you ask David Haight, this donation to Lethbridge College is priceless. Haight, coordinator of the labs in the Cousins Science Centre, says the 24 birds of prey displayed on the second floor of the building, represent just a fraction of alumnus Peter Balagus’s gift. Balagus (Environmental Science 1980)  also gave a cabinet full of about 200 other specimens including small mammal skins, skulls and skeletons, and bird skins and wings; each carefully catalogued and preserved. They are not on public display but students can access them for study. Such access allows students to see for themselves the subtle differences between species and genders of the same species. Balagus recently visited the college with his wife Colleen, who was making her first visit to campus. They emerged from the Cousins Building stairwell to be greeted by the raptor display, set against a panoramic photo taken from Table Mountain. The photographer was college lab technician Jonny Friesen, who organized the display. “The background is beyond what I anticipated,” Balagus says. “It’s absolutely fabulous. It’s humbling and moving.”

the 24 birds of prey displayed on the second floor of the building, represent just a fraction of alumnus Peter Balagus’s gift.