Work hard at something you love, and work for the team’s success not just your own.

What is this idea all about?

My parents instilled in me the value of hard work. I grew up on a cattle farm in Manitoba, and I think the backbone for me going through college and getting this job was just hard work. I don’t consider myself to be the smartest guy out there, but I will try to be the hardest-working guy that I can be, and I think that’s what’s gotten me to where I am today. As far as working at something you love – I truly love policing and the work I do in the K9 unit. I think you can’t do something for the rest of your life unless you genuinely enjoy it. You want to go home at the end of the day feeling a sense of accomplishment.

And I love working as part of a bigger team. Each patrol team is made up of a certain number of members, and everyone has their role. I’m the dog handler for one team, but we also have different roles on that team. Everyone has a place in an investigation. When we go out on a call, there’s a lot of decisions that have to be made very, very quickly.One of the things I like about policing is that you can break it down and know what you are prioritizing, and what you can get done now and what can wait. It takes the entire team to accomplish the investigation. You learn so much from different people. Everyone brings a specific skill and everyone is good at something, whether it’s the person who knows every law inside and out, or another person with a silver tongue who can talk to anyone. It takes all types of people and personalities to come together, to bounce ideas off each other and just to be successful. There’s no way I can be successful with the dog unless my team is helping me out. I can only accomplish so much on my own. But it’s a team effort – not just to make me successful but to make everyone successful.

"I think you can't do something for the rest of your life unless you genuinely enjoy it. You want to go home at the end of the day feeling accomplished."

How have you seen this idea in action during your time as a student at the college?

When I was a student, I worked at least two jobs while attending classes. I did security for two companies, and I also did suicide interventions for Canadian Mental Health for the last two years of my degree. I lived in residence for three years, which was a great part of going to college. It let me build my community and friendships and network and helped me to meet people and have new experiences. And it was convenient – my family lives 10 hours away, so it wasn’t easy to come out to look for an apartment for the weekend. I found the college program was very interactive, which I loved. There was the original crisis intervention class, with a lot of interactive stuff that brought me out of my shell and helped me learn to speak to people and interact with them. I really liked learning things practically rather than learning from a book. I usually learn stuff best by doing it – which is another reason I like being on the street as a police officer, so I can do as much as I can.

How have you seen this idea in action during your time with the Lethbridge Police Service?

Here’s a small example. We had a report of a B and E (breaking and entering) recently, and after some of what my staff sergeant called good old-fashioned police work canvassing the neighbourhood, we were able to arrest two suspects with a bunch of evidence on them within a couple of hours. Now this is small scale; it’s one break and enter. If we hadn’t solved it, it’s not like it would be the end of the world. But to the business owner – it was a big deal. It was a broken window, a violation of privacy and money gone. For me, it’s satisfying to know that [the arrest] would make his day, and that the team worked together to make it happen. I’m going to do everything I can to help out with this kind of stuff. It doesn’t always work out like that, but when it does, it’s a very accomplished feeling. I love this work. I like being on the street and going call to call. I can help out as much as I can. Often, my role is working with Robby to help find people, and that’s what I love to do, which makes my job easier because I’m enjoying it. 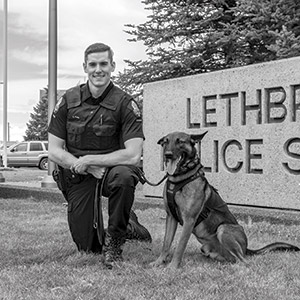 Constable Andrew Firby is a 2010 graduate of Lethbridge College’s Criminal Justice program and a 2012 graduate of Athabasca University. In the fall of 2011, he applied for a job with the Lethbridge Police Service, where he was hired and started working six days after graduation. Firby spent five years working in patrol before applying last year to be part of the department’s K9 Unit. He and Robby, a Belgian Malinois, completed 16 weeks of training that included tracking, obedience, agility, building searches, compound and area searches, evidence searches, criminal apprehension and drug detection. He now works with fellow Lethbridge College alumnus Rick Semenuik (Criminal Justice 2000) and his Belgian Malinois, Ymos, as well as two other K9 teams to provide all of the tracking, searching, apprehending and drug detection needed by the department.