“Ex Disciplina Docti” or learning can only be achieved by discipline and hard work.

Dean W.J. “Jim” Cousins, Lethbridge College’s first chief executive, was asked to bring several school mottos to the first Board of Governors during the college’s inaugural academic year, 1957-58. The board directed him to include the words “doctus” in its meaning of “learning.” He found several mottos, and the one the students selected was the motto above, which, roughly translated, means “through discipline learning.” The spirit of this motto echoes throughout the pages of an oral history about Cousins conducted in 1975 by Charles Ursenbach.

You must have been influenced by a good many teachers. Have you a particular teacher who influenced you?

There are a number of them. But there was one in particular and I think it’s partly due to him that I’m in the history profession. This man, Mr. Hughes, … had a marvelous knack of telling stories. So all the history he taught me I can remember almost word for word. I can remember the expression on his face when he said it. … I think it has something to do with the fact that I’m a Welshman. We’re very musical. 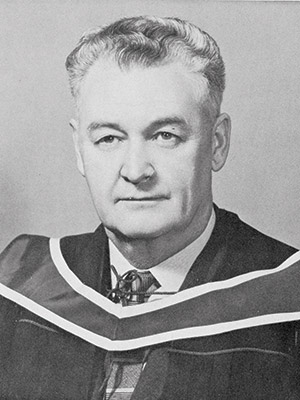 Was this music a vital part of [your] school training?

I took a very broad pattern. They wanted breadth in those days… so I had French, I had music, calculus, chemistry, and every one of those was useful in teaching history, because a historian has to know a little bit about medicine, chemistry, science and everything that went with it. All the courses that I had gave me a great breadth, because I wanted to know this and that and the other thing. You can find that today when I’m talking that I can draw illustrations from so many different places.

It appears to me this great urge you have for learning must be quite a gift.

It must be that I have a general intelligence. I used to take all these subjects in university thinking “Now I’ll be a genius in one of them,” but I never was. I was good in a whole bunch of them. …From the time I was 2½ years until I was 60, my life had been a constant one of studying and learning. I never had a chance to stop learning and appreciate doing nothing. Even now my conscience bothers me if I’m not over there with microfilm digging stuff out.

At the University of Alberta, you had to prepare 25 to 30 per cent of your work before you went there. I always had it done. It was done and I could write the exam on the first day. While a lot of teachers said they didn’t have the time, I used to say “Well, you make the time.” Because I had to make it. I had to garden, I had to teach my students, I had to put on concerts and I had to study, even if it was after eleven o’clock some nights. So I was never caught flat-footed, and on the first test I always made a good mark. And the rest of the term I would work very hard. You have been involved in education here in the city, particularly in the junior college and also in the University of Lethbridge.

I was never caught flat-footed, and on the first test I always made a good mark. And the rest of the term I would work very hard.

Would you like to tell us about the growth of those two?

Once we got started in 1957, after the University [of Alberta] accepted the idea, we decided that we were going to open a junior college. …So we opened with some university courses, first-year arts and science and first-year education, and with a course in business. …We had one student in motor mechanics…[and] a couple of rooms in LCI. When we started that year then, we had almost as big a staff as we had students. The students of the first year [at Lethbridge Junior College] did very well when they went to the university the next year.

…I think the city owes a lot to the junior college. …When Lawrence Bussard asked me in 1957 if I thought the thing would succeed, I said I thought it would but he wondered where the students would come from. One is the community college and the other is the University of Lethbridge, but they were both Lethbridge Junior College and that’s where it started and that’s what it is.

What has been the great impact upon your family in Lethbridge?

I think it was my association with the junior college, because when that institution came, the college was a new idea. It’s a movement now, but I had to sell the idea. I had help from a lot of people like Lorne Blackbourne and Lawrence Bussard and so on. But I was a speaker, and as a speaker I went around to all the schools and to graduations and all sorts of places. I think I’ve been in every school from the boundary down to Medicine Hat. …That college got me started as a speaker, and I think that is what I’ve been doing ever since. I think that is the biggest impact in Lethbridge.

W. J. “Jim” Cousins, a Welsh-born history teacher at Lethbridge Collegiate Institute, was 45-years-old when he was the first person hired to work at the college – to teach history – and later named the college’s first chief executive officer. He served in this role until 1963, when he returned to teaching history full-time at the college, and he was one of the inaugural faculty members when the new University of Lethbridge opened in 1967. He retired in 1975, shortly before this interview was conducted, and died in Lethbridge in 1996 at the age of 88.

Special thanks are given to Bob Cousins, the grand-nephew of Jim Cousins, and his wife Lois Romney, for alerting Lethbridge College to this oral history and sharing the book with us.