The big idea that I think is so cool at the college right now is that we can actually transform education - but we can’t do this if we don’t have an eye on diversity, including gender diversity.

What is this idea all about?

Whether we’re talking about the law or post-secondary institutions, it’s important to have diverse voices – women’s voices, Indigenous voices, immigrant voices, LGBTQ voices, all kinds of voices – at the table, because those voices say important things. They are a part of and connect us to the community we serve. How can we expect to serve a community that we don’t understand or know? If we expect to do exceptional work for the people we want to serve, we need the people we serve at the table for conversations. In the context of the college, our learners need to know that the best ideas the college has had and ever will have arose as a result of a commitment to push the kind of boundaries previous thinkers didn’t accept or even acknowledge.

My own experiences include working in a traditional male-dominated profession and being the first woman to become partner at Alberta’s oldest law firm, so I can speak passionately about the question of why we want to have women’s voices at every decision-making level. And my favourite answer to that question is simple: Historically, women have been good at asking the question “why not?” Why not have the biggest trades training facility south of Calgary? Why not make excellence our standard? Why can’t we respond proactively to a changing economy? Another reason why I think we need women in educational leadership is because we are acutely aware of how education transformed our own approach to the things that matter.

How do you see this gender diversity in action at the college – whether in its history or in the present?

Lethbridge College has a long and proud history of women in leadership roles. Women have served as president for 27 of the college’s 60 years, and as board chair for 15 of those 60 years, starting with the first chair, Kate Andrews. Everything I’ve learned about Kate causes me to adore her. I am just so impressed with her commitment to education. And I loved too how silent the issue of gender is in Kate’s historical ground-breaking work. Kate was in charge because Kate had exceptional skill and ability; she didn’t acquire her position because she was a woman. Her gender was absent from formal discussions, but so very present in every decision she made. She had compelling arguments, exceptional commitment and a practical approach. People felt compelled to listen to her ideas, and ultimately support the college in so many aspects. In retrospect, 50 years later, we look back and say she was an amazing woman, and so much of her amazingness came from her social location as a woman.

"Lethbridge College has a long and proud history of women in leadership roles. Women have served as president for 27 of the college's 60 years, and as board chairs for 15 of those 60 years, starting with the first chair, Kate Andrews."

What is your take on the state of gender diversity in the legal community?

I was the first woman partner at Davidson and Williams, which is Alberta’s oldest law firm. When I became a partner in 2007, it never occurred to me that it represented a significant change. My partners were my colleagues and advisors whom I respected and felt privileged with whom to work. The gender dynamics, as between me and my partners, were not difficult because of our personal connections to each other.

But our industry has been male-dominated in every respect – all the way from a firm’s internal organization to historical jurisprudence. The gender imbalance can sometimes feel difficult to manage. As an industry, we are experiencing large problems as a result. Women are leaving the profession at a disproportionately higher rate than men and we’re seeing women moving toward certain kinds of law and not others because of the gender differences. At the national level, the Canadian Bar Association and our various provincial law societies are tackling the problem and ironically, they’ve come up with a relatively universal and simple solution: that is, “Why don’t we just be nicer to each other overall and ask women what they need from and think about their work?” During the last five years or so, I’ve had the privilege of seeing and being a part of a lot more local and regional initiatives like formal mentorship programs to combat the gendered experiences we want to eliminate. So that’s the larger context in which gender is placed in the industry of law, and I would love to see my profession continue to head in that direction. 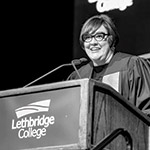 Kristin Ailsby is the recently-named chair of the Lethbridge College Board of Governors. She is the owner of Clarity Law in Lethbridge and is a collaborative lawyer, an experienced litigator and actively involved in the southern Alberta community. A past president of Executive Women’s International, Ailsby was presented a Women of Distinction Award by the Lethbridge YWCA in 2013, was named “volunteer lawyer of the year” in 2014, and until very recently chaired the Southern Alberta Art Gallery’s Live Art Love SAAG capital campaign.

Ailsby was inducted into the University of Lethbridge Alumni Honour Society in 2017 in recognition of her appreciation and celebration of the community she serves and the strengths she creates from engagement with diverse groups and interests. She also was recognized for her belief that education can transform communities by empowering people to achieve their goals, and for making all of her contributions to the community with grace, confidence and a solid dose of humour.