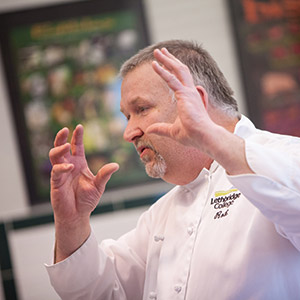 One afternoon in May, I sit down at a desk in a Lethbridge College School of Culinary Arts classroom to take a test I hadn’t studied for and couldn’t pass or fail.

I am there, along with 16 members of the culinary program’s advisory committee, for a session of organoleptic (sensory) testing, led by instructor Rob Sonnenberg (Renewable Resource Management 1992, Fish and Wildlife 1993). There are no exam books or calculators – just trays of fresh produce, some of which come from the college’s aquaponics program, which raises fish and grows produce together in a single integrated system.

The test itself is straightforward. Seemingly identical samples are given to each participant who is asked to taste and evaluate them according to an array of criteria; some are simply ranked in terms of preference, some are rated on a scale weighing different qualities, including colour, smell, texture and, of course, taste. To eliminate any potential bias, we aren’t told where each sample comes from. They could either be from the college’s aquaponics program, or from the grocery store down the street.

“We want to make sure the food that is being grown by our aquaponics program is good and determine how good it is,” says Sonnenberg.

“We want to make sure the food that is being grown by our aquaponics program is good and determine how good it is.”
Rob Sonnenberg

“The sessions we are running are made to answer those questions in a scientific manner. There’s inherent biases and it’s neat to see where those exist with certain products. For example, one of the big myths we face is the belief that [produce] grown in fish water has a fishy taste and that’s not the case.”

As each sample of bok choy, kale, basil, lettuce and tilapia comes and goes, I find myself straining to detect the differences between each. Three different containers of lettuce could be from the same head; later it’s revealed two were from the same crop from the aquaponics program, but picked a few days apart. I make notes and try each sample repeatedly before submitting my opinion. Overall, the test is a challenge, but an interesting insight into the ways the kitchen and the lab are coming together through the college’s applied research programs.

Rob Sonnenberg wears many hats at Lethbridge College. As Chef Rob, he is a full-time instructor in the Culinary program, helping train new generations of chefs. But the Coaldale native also wields diplomas in Renewable Resources and Fish and Wildlife technology, as well as bachelor and master’s degrees in environmental science.

“I was working as a fishery consultant when I applied for a teaching position at the college, so from about 1993 to 2014, I would teach cooking from August to May and then I’d go work with fish out in the woods during the summer.”

"...it's important to know that the food we're growing is comparable to what you can get at Safeway or Broxburn Farms."
Christine Pickens

While food science is having something of a moment, thanks to the popularity of figures like British celebrity chef Heston Blumenthal and Spanish molecular gastronomy pioneer Ferran Adrià, for Sonnenberg the two interests overlap at a more elemental level. “I very much enjoy and connect to the outdoors, hunting and cooking wild game and harvesting my own products,” he says. “That’s where that outdoor connection and cooking come together for me.”

In 2015, Lethbridge College received a $2.1-million Natural Sciences and Engineering Research Council of Canada (NSERC) grant for aquaponics research. Currently fish, such as tilapia, and produce, such as lettuce, tomatoes, cucumbers and bok choy, are being produced through water recirculation technologies and greenhouse operations at the college (see p. 17). “The sensory testing is one aspect of our NSERC grant,” says Christine Picken, operations manager in the Centre for Applied Research and Innovation. “We are growing plants with fish waste and so it’s important to know that the food we’re growing is comparable to what you can get at Safeway or Broxburn Farms.”

With his extensive experience in the kitchen and his background in environmental science, Sonnenberg was a natural fit to lead the sensory testing portion of the project.

“They let me take the ball and start running with it,” he says.

In May 2016, Sonnenberg was part of Lethbridge College’s culinary research team that underwent a three-day organoleptic training session by Sirocco Food and Wine Consulting to learn how to use the senses of taste, texture, sight and smell to create protocols that allow testers to subjectively evaluate the quality of foods so they could, in turn, deliver their own training sessions.

While the current focus is on evaluating the produce from the college’s aquaponics program and completing the research project under the NSERC grant, Sonnenberg says there are other applications for this type of research.

“I’ve had a few discussions with people in the food service industry, nothing concrete, but there is some interest there,” he says. “For instance, I’m hoping to work with a local [producer] of haskap berries. We’ll run those in one of our sessions to get the analysts’ views of that product. If the industry finds this is useful for them, you never know where it can go.”

So far, Sonnenberg has run four of the training sessions, with 12 more to come over the remaining three years of the project. The first few sessions have drawn from local commercial aquaponics and greenhouse growers, the Culinary program advisory committee, and Culinary students, but Sonnenberg is hoping to grow his base of test subjects.

"It opens the eyes of the students and shows them that it's not just the art-side of cooking; there's a science-side hat you can make a living on if you want."
Rob Sonnenberg

“I’m working on a plan to canvas the general population at the college to see if we can get some people who’d like to do this,” he says. “I’m hoping to build a database of people who are interested and get a little more pointed in asking questions about their habits to give me cleaner data. It’s maybe not as exciting as going to a wine tasting, but people think it’s interesting.”

Sonnenberg says that beyond the research project, bringing science into the kitchen can have some side benefits for culinary students. “The science of cooking is on the rise and there are definitely job opportunities out there with a lot of companies on the product development side,” he says. “It opens the eyes of the students and shows them that it’s not just the art-side of cooking; there’s a science-side that you can make a living on if you want.”

At the conclusion of the sensory test session, Sonnenberg goes through the results and informs the test group (myself included) about the origin of each sample. I’m not surprised, given how hard it was to detect differences and the fact I’ve never tasted aquaponically-grown food before, that my choices skew to the supermarket stuff. But perhaps that itself is a testament to the quality of the product that an untrained pallet like mine can’t spot the difference.

I come out of the test having learned this punny lesson: taste might be subjective, but there’s nothing fishy about Chef Rob’s research.