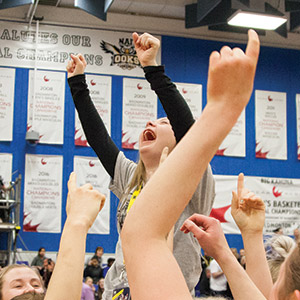 As the final buzzer sounded at the CCAA Women’s Basketball National Championships in March, the Kodiaks jumped for joy and huddled together in sheer jubilation at centre court. In the middle of the pack, hoisted high up in the air, was an 18-year-old who hadn’t played a moment of the game.

She wasn’t a Kodiaks player. In fact, she had only seen six games live all season. But she was a key figure in the playoff season, and that moment – held up high and surrounded by cheers – was one she called her dream come true.

Hanna Strebel is the younger sister of Shantaya Strebel, a third-year Kodiaks forward from Tabiona, Utah. Hanna has Down syndrome. Shantaya says it’s never defined who she is or what she does. “Growing up I honestly didn’t know she was different,” explains Shantaya. “My mom always said she was special, but I didn’t really ‘get it’ until I was older. She would take dance classes with me, play volleyball, and she wasn’t limited by any means.”

Hanna cheered on Shantaya throughout high school and two years at nearby Utah State University – Eastern. Shantaya transferred to Lethbridge College in December 2014 and Hanna watched every game online. This year, Hanna was able to visit Lethbridge as the Kodiaks hosted the ACAC championship tournament. The trip was extra special because “Coach Hanna,” with the full support of then-head coach Brad Karren and the rest of the team, got to sit on the Kodiaks bench for each game.

After the Kodiaks claimed the ACAC championship and qualified for the CCAA national championships in Edmonton, Hanna and her family knew they had to make the long trip north from Utah. When Hanna arrived at the hotel, she shared a confession. “She said ‘Mom, you know what my next dream is? When they win, if they would just pick me up in the middle and hold me on their shoulders and cheer,’” Shantaya recounts.

Kodiaks then-assistant coach (and newly-named head coach) Deanna Dotts overheard Hanna’s comment. After Hanna was out of earshot, Deanna assured Hanna’s mother: “If we get there, we are making it happen.”

In the final, the Kodiaks overpowered Dawson College 81-57 to secure an undefeated season and the fourth national championship in program history. “When the final buzzer went, Hanna came running out onto the floor. We were cheering and Logan [Moncks] saw Hanna and she was like ‘lift her up guys, lift her up!’ So she and Emma [Lowry] lifted her up on top of the entire team.”

It was extremely emotional for Shantaya. “If you look at the pictures, I was kind of away from the group because I was crying,” she says. “I was super happy about winning the championship, but really I was crying because my sister’s dreams were coming true and it was so much bigger than me. It was just very humbling to see my whole team make her dreams come true, even as ours were coming true at the same time.”

As the team celebrated, the coaching staff and Kodiaks Athletics manager Todd Caughlin got to work, arranging with CCAA officials for Hanna to receive the same champions’ hat, t-shirt and gold medal as the rest of the team. “Todd and the coaches were so good about it, they were behind the scenes making all this happen for Hanna.”

Hanna posted about the experience on her social media pages, where, with the help of her mom, she regularly chronicles her life, from her cheerleading competitions to her performances in her school’s speech and drama program. Her Facebook page has more than 20,000 followers – many of them families who have children with Down syndrome or other disabilities.

In addition to inspiring her followers, Hanna had a big impact on Shantaya’s Kodiaks teammates. Logan Moncks, the ACAC Player of the Year, says Hanna opened her eyes to what people with disabilities can accomplish. “Hanna has changed my life. She gives hope to families all around the world and she has shown that a disability will not stop her.”