He welds. He invents. He teaches. He races. 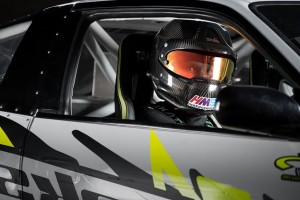 About the only thing that 2010 Lethbridge College welding alumnus Rob Parsons can’t do is walk.

Parsons used to weld and invent and race and walk – all with an intensity and quickness that inspired (and occasionally overwhelmed) the people around him. He loved motorsports and raced and rode everything from dirtbikes to sportscars designed to drift. When he wasn’t working at KB Heating and Air Conditioning in Lethbridge, he was working on machines and riding them.

“I had been racing cars for about 10 years,” says Parsons. “And I was always fabricating, welding and making stuff. I was good at problem solving. I could envision stuff and then put it together. I was always tinkering.”

Then came the June day in 2011 when he was leisurely riding his motorcycle at Temple Hill in Raymond. “I was warming up, on the back section [of the] table top,” he recalls. “I came up short on a step up and landed stiff legged off the edge of the berm. I knew before I landed that I would never walk again.”

The impact of the crash caused breaks to both of Parsons’ legs – tibias, fibias and femurs – and punctured his lungs. It also severed his spinal cord. Parsons’ instinct in the air after he lost control of his motorbike was right. “I spent six months in the hospital, including two weeks in the ICU after the accident and another week after I got an e-coli infection because of the hardware in my back,” he recalls. “I came home right before Christmas.”

While Parsons was recovering, he was thinking – fast. He figured there had to be adaptive race car programs out there for people who didn’t have the use of their legs – that there had to be a way to, as he said, “make it work.” But there was nothing. So Parsons created what he was looking for, building both an adaptive, 600-horsepower competitive drift machine from the ground up as well as a charitable organization to help others with disabilities “develop a passion for motor sports and provide the adrenaline rush that so many people yearn to feel.” And he’s done it all from the seat of his wheelchair.

“A lot of people would give up for way simpler reasons,” he says. “I had no intention of doing that though. I accepted the fact that I busted myself up pretty good. It was like ‘Alright, deal with it and move on. Don’t be a baby about it.’ And so I went looking for an opportunity [to participate in adaptive motor sports] but it just wasn’t out there.”

Creating that opportunity – for himself and for others – seemed like the natural solution. “I just wanted to help other people who were in the same position, sitting there and thinking ‘I can’t do this anymore.’”

Once he had recovered enough to start working, Parsons, with the help of some friends, spent more than 18 months building a car in his garage in Lethbridge. “I’ve built cars before, so I knew what to do,” Parsons says. “So I set out to build the best one around here and blow everyone away and show them it can be done.” Parsons started by stripping a 1991 Nissan 180SX to its bare shell and built a “rotisserie” to hold a sand-blasted chassis. He then built a roll cage, using some of the skills he learned as a welding apprentice at the college as well as his own personal and professional experiences.

The biggest challenge of building the car, Parsons says, was creating an electronic clutch system that could disengage the clutch as fast as someone clutch kicking the pedal could. “I set out to keep my hands within a box and have it so my hands cannot move and I could control everything with my left hand,” he remembers. “Then I also said that the clutch needs to be as fast if not faster than the human foot, which was a huge task to conquer. Well, it’s not difficult if you have a lot of money, but to make it affordable was a challenge.”

Putting his tinkering instincts to work, Parsons engineered several prototypes and ended up with a system that has full disengagement in .2 seconds. Currently he is working on a system that will increase the speed of disengagement to .125 seconds. The hand control is truly one-of-a-kind – and the patent on it is pending. It allows a driver to use one hand to control the gas, the brakes, the clutch and shifting up and down, while the other hand controls the steering wheel.

Once Parsons was satisfied with the hand control, he put on the suspension and body panels. And then about 18 months ago, he took his car out for its first test drive – a day he calls one of the best of his life. “The first time I drove it was unbelievable, but also very stressful,” he says. “There was so much going on. It was a crappy day out and it was snowing slightly and I didn’t have a windshield on the car yet. But I went outside and drove it around the block. I was like ‘Holy crap, it actually works!’” Parsons said the relief at this milestone is still memorable – as was taking it to a track for the first time. “It blew my mind,” he says. “Everything worked better than I expected and I just felt so at home in the car because everything worked so well.”

Later in the spring of 2014, Parsons brought the car to Lethbridge College to take it through the paces on the Automotive department’s Dynometer, which measures the power output of an engine. Current automotive students gathered around and peppered Parsons with non-stop questions, while his former Welding instructors spoke warmly of the graduate.

“My first thought when I heard about the accident was that if it was going to happen to someone who wouldn’t be slowed down, who would be okay, that would be Rob,” said Welding instructor Dave Heins. “He is meticulous, skilled, talented – and a perfectionist.”

“When Rob was a student, he wasn’t here just putting in his time,” added Welding instructor Jeremy Lauzon. “He saw everything as an opportunity to learn, an opportunity to get better. It was like you couldn’t put an obstacle in front of him that could stop him.”

Welding and Automotive staff are not just proud of their former student and his remarkable car. They are also impressed with the Chairslayers Foundation Parsons has created to give other disabled drivers a chance to feel the thrill of drifting – the driving technique where the driver intentionally oversteers, causing loss of traction in the rear wheels or all tires, while maintaining control from entry to exit of a corner (the 2006 movie The Fast and the Furious: Tokyo Drift features this style of racing).

Ben Conolly, a teenager from England, was 17 when he became the first adaptive clinic attendee for the Chairslayers Foundation. Ben was diagnosed with leukemia in 2013 and lost all feeling from his chest down after a tumour had grown into his vertebrae crushing his spinal cord.

“As you can imagine Benjamin initially had a few very dark days after he found out that he had been paralysed,” Suzanne Conolly, Ben’s mom, wrote on the Chairslayers website. “It had been his dream to drift Japanese cars, since his father had taken him to a drift meet at our local race circuit. His father and I in those early days bounced every negative comment back with a positive and then he started looking at the internet for himself. First he found the wheelchair he wanted and then he found a gentleman who was paralysed in Canada, who had developed a way of drifting. It was Benjamin’s eureka moment – he now saw an opportunity to do what he had wanted to do for so many years.”

So with a three-month-old driver’s license in his pocket, Ben took a seat behind a steering wheel for the first time with Parsons at his side – and they took the car on an incredible test drive which was captured in a six-minute story on the Discovery Channel’s Daily Planet. “It’s crazy how easy the car is to get to grips with in so little time,” Ben said at the end of the video. “It’s amazing… best day of my life definitely.”

Parsons wants to create more of these best days for other disabled drivers in the future and has planned clinics in North America where he can demonstrate his adaptive creation and give others a chance to experience it. To support that goal, he (and the car) moved to Long Beach, California, this year to be closer to the racing scene and some of his supporters and sponsors. He also had the chance this last spring to race the car competitively at a Formula D event, finishing in the top 16 out of 60.

In the decades to come, Parsons expects he’ll be doing much of what he has been doing for all of his adult life – welding, inventing, teaching and racing. The inability to walk won’t keep him from his goals. And he’s always loved driving best anyway.

For more information about Parsons and the Chairslayers Foundation, go to chairslayer.com. To see the Discovery Channel video, go to learn.lc/chairslayer. And to learn more about Lethbridge College’s Welding or Automotive programs, go to lethbridgecollege.ca/programs.