It starts with “Impressive Opener for Kodiaks.” That is followed by “Kodiaks Hit Hot Lick in Sweeping Hoop Set,” 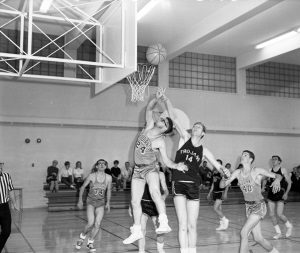 “Locals Triumph,” and “Kodiaks Breeze Again In College Hoop Play.” Then there was “117-Point Spread in Kodiak Victory” and “Kodiaks Lay Home Streak On Line Against Calgary.” The outcome of that game is shared in “Kodiaks Take Thriller, Still Unbeaten At Home” and the season ends with “Alberta Sweep For Lethbridge: Junior College Hoops Squads Capture Conference Laurels.”

The remarkable 18-1 season came just four years after a team of six men (two of whom were Lethbridge Collegiate Institute students who didn’t make the cut on their high school team and were “loaned” to the college) first took to the hardcourt in Kodiaks jerseys and “hardly won a game but had a lot of fun,” according to then-coach Dr. Gary Bowie. Under Bowie’s direction, that men’s team – alongside the successful women’s basketball team who competed as the Koalas – established the foundation for what has been more than a half century of outstanding hoops play at Lethbridge College.

For their efforts in that golden 1966-67 season, the men’s team was inducted into the Lethbridge Sports Hall of Fame during the special 30th annual ceremony in May.

“I think it was a very positive force in our community to have the college and an athletics program here,” says Bowie, who was one of the founders of the Western Inter-college Conference, which is now known as the Alberta College Athletic Conference. "When I first came in 1962, the college’s athletics programs were hardly noticed. But we started building it up as a source of pride for the college. Eventually, the college started taking over the sports pages of the newspaper. People started seeing there was something to this whole thing.”

Bowie adds that the 1966-67 season also marked the first time the college was able to recruit students right out of high school to look to the college, rather than the University of Calgary or the University of Alberta. “It marked the moment when we realized a sports program would be a draw, and that we were able to compete with Calgary and Edmonton,” he recalls.

The 1966-67 team was a diverse group. It included players from Lethbridge and the surrounding small towns and farming communities, players fresh from high school as well as those who had been working for a few years before returning to school, and players from the trades, college and university-prep programs.

“They worked so well together,” says Bowie. “It was an extreme pleasure to work with them. There were no barriers to that group,” which included Wes Balderson, Buddy Belle, Marvin Bolokoski, Blaine Burbank, Myron Eaves, Bob Herget, Bruce Hirsche, Brian Leavitt, Ron Low, Jerry Nyklew, Vern Sommerfeldt and Gary Young, as well as team manager Grant Miller and assistant manager and statistician Clayne Steed.

The team will be recognized at a home basketball game this fall. Check out gokodiaks.ca for more details which will be announced closer to the start of the season.