Turbulence, motion sickness and flying into unknown situations are all just part of the job for 1985 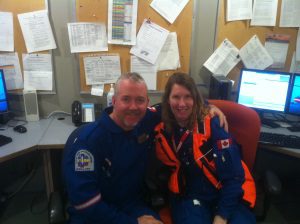 Hogan, who is approaching her 25th anniversary of working as a registered nurse for the Shock Trauma Air Rescue Society (STARS) at the STARS Calgary base, has made almost 600 flights in her career.

“You never know what you’re going for until the radio goes off,” she explains. “It could be trauma, stroke, heart attack, neonatal intensive care and more.” But despite the challenge of not knowing what situation awaits them, Hogan says there is great value “working with such a close team. On every flight, there’s a nurse and a paramedic, and possibly a physician, who work in the back and two pilots up front. And that’s it. We have a lot of autonomy and great, great teamwork. ”

Hogan, who also works part time in the intensive care unit at Foothills Hospital in Calgary, says she still draws on some of the basic nursing skills she learned as a student at the college in both of her jobs. “You always need to know your basic nursing assessment,” she explains. “Even when we are in the ICU, we are doing bed baths and skills we learned in basic nursing.”

Flexibility, physical strength and the ability to work in a confined space are essential to her work with STARS. “Sometimes we’re told a patient we are picking up has a certain condition, but when you get there you learn that’s not what it is,” she says. “The other night, we were getting the helicopter ready for one patient on the way down and shortly after we arrived, the hospital said there was another patient who needed to be flown instead. So you always have to be adaptable and not set in your ways.”

The job is also physically demanding. “When we land in a field, we have to be able to get that stretcher to the patient and back to the helicopter – which is something you wouldn’t face in a hospital,” she adds. “And we work in a very confined space. It’s not for everyone.”

The benefits of the job are many, including seeing the province from a perspective few get to see when the team doesn’t have a patient on board. But the best part of all is “seeing the people you have helped and knowing you made a difference in someone’s life,” says Hogan. “By being flown by STARS, we’ve given someone a chance to get the more advanced care they need.”