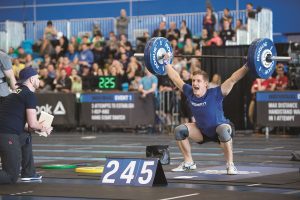 Karli has started working at Matters of Design Inc. in Lethbridge as a member of the design team. Matters of Design sent out a warm Facebook message with the news in April, noting that Karli brings a wealth of experience and an eye for interior design to the job. She had previously worked as a decorator at Home Depot in Lethbridge.

Mackenzie is a feature columnist with Estevan Lifestyles, an award-winning, free circulation weekly publication that shares the stories of the people in the Estevan area and the southeast corner of Saskatchewan. His first column of the summer discussed some of the assignments he undertook during his second year as a Communication Arts student and some of the great experiences he has had as a Lethbridge College student.

Corne was featured in a May article on GrainNews.com about his work with Rudy Knitel building Galimax Trading, Inc., which supplies fresh produce to restaurants and stores in Calgary, Canmore, Banff, Lake Louise and other southern Alberta communities. After growing up on an organic farm, Corne attended the college and became a part-owner of the Nobleford business about four years ago. He and Rudy have worked together to organize a network of young farmers to produce free-range eggs from small hen flocks. They also work with farmers to have locally grown fruit, vegetables, local organic dairy products and eggs delivered to the Nobleford plant weekly and to restaurants looking for quality products.

Ann is the designer and owner of her own small business in Halifax, Nova Scotia, called Cypress and Argon. She was featured in an article in the Halifax arts and entertainment weekly The Coast in early May, showcasing one of her designs, a floral crop top and black pleather panelled skirt. She says she is inspired by a 1960s aesthetic – bold, equestrian and mod. Cypress and Argon debuted at the 2013 Atlantic Fashion Week. The collection was inspired by simple modern form, and fun pattern. Ann says her label name comes from opposing elements. As she states in the article, “cypress is a tree, calm and collected, while argon is a gas, crazy and unpredictable.”

Paige has been working as a video journalist at CTV Yorkton since February 2013. Born and raised in Regina, Sask., Paige came to Alberta to study at the college. She landed an internship at the CTV station which turned into a fulltime job as a video journalist. When she is not at work, Paige can be found spending time with her family, riding her bike or adventuring in the wilderness.

Brent, who was a key player on the men’s volleyball team, finished fifth in the world (of 111,000 athletes) on the first of five CrossFit Games Open workouts. He took first in three of the five Open workouts in February, helping him advance to regional qualifying. In May, he finished third in the Canada West regional qualifier, just missing a chance to travel to the CrossFit Games in July. After earning his Lethbridge College diploma, he went on to earn his Bachelor of Commerce degree at Griffith in Australia. He now works at Okanagan Strata Management in Kelowna, B.C.

Aaron graduated from the Saskatoon City Police Academy in May 2013 and has been working full-time as a constable ever since.

Kim recently started work as a social media officer for the Regina Police Service. When she’s not building and fixing websites or solving client crises, you’ll likely find her volunteering. Kim is active with the Kinettes, the Saskatchewan Co-operative Youth Program (SCYP) and Help-Portrait (an annual event that provides free portrait sessions to people in need of a smile). She has also participated in the Geek Girl Dinners (events which encourage and recognize women in science, technology, engineering and mathematics) in Saskatoon and Regina, presenting at Regina’s first event. She has also presented twice at BarCamp Saskatoon (a conference for people who love technology). She enjoys volunteering at SCYP seminars for a week every summer, helping youth develop their leadership, cooperation and team building skills as well as educating them on fair trade and global development. “Volunteering is a great way to give back and help others,” she says. “If you’re from a small town, you have to help out, otherwise nothing gets done!” (Story by Megan Shapka)

Amber checked in with Wider Horizons to update her address and took the time to share this update: “I’m in Calgary now. After graduating from Lethbridge College, I went on to Mount Saint Vincent University in Halifax and completed my Bachelors of Public Relations. I’ve been working in Communications/PR for the last five years and currently work for Cenovus Energy as a Communications Advisor. It’s a competitive, fast-paced industry and I’m learning and honing new skills every day!”

We had a serious omission in the Downtown Dining Edition of the “Where Are They Now” section of the Spring 2014 issue of Wider Horizons. We noted that Ryan Squire had worked at the Lighthouse Restaurant in Lethbridge for two years, but failed to mention that he was the owner of this favourite Lethbridge restaurant. We regret the error and asked Ryan to fill us in on his work. “The Lighthouse has been in operation for 10 years now but I purchased it just over two years ago. I worked at other franchise restaurants before this which I feel gave me the knowledge and understanding to operate my own business. I wouldn’t have been able to do it without the help of my previous employers. I currently employ three other Lethbridge College grads and another of our staff is currently attending the college. This year we were named best ethnic cuisine in Lethbridge by the Sun Times ‘Best of The Best’ as well as named one of Alberta’s top 10 restaurants on Urbanspoon.”

Cory’s restaurant, Two Guys and a Pizza Place, closed its doors for two days this summer when crews from The Food Network’s show You Gotta Eat Here! came to profile the Lethbridge pizzeria. Two Guys is the first Lethbridge restaurant ever to be featured on the show. In a July article in The Lethbridge Herald, the show’s host, John Catucci, said “Cory, the owner, is an amazing dude. He cares about the community and he cares about the food.” The episode featuring Two Guys will air next year during Season Four.

Rob Vogt came to Lethbridge College in 1999 after completing two degrees with the knowledge that he always loved writing. His uncle, Ed Schurman, was a board member and had always advocated for Lethbridge College, which made his decision to attend the college an easy one. During his time as a student, Rob worked at the mailroom at the Lethbridge Herald and undertook freelance writing assignments. Rob says the instructors were always very supportive of his career aspirations. Rob became editor of the Claresholm Local Press 10 years ago and the impact he has had on the small community is significant. Rob has been a key member of the community and members of the town describe him as a leader and a community member who brings the town together with each Wednesday issue he publishes. Rob is currently working on his own book on his family’s history on their travels from war-torn Europe to Canada. He has also written three novels – Stone Keys, Miller’s 8, and White Knight – and plans to write a textbook on small town journalism. (Story by Alexandra Kulas)

Maj. Tim Isberg was featured in an article in the St. Albert Gazette earlier this year about his work building a literacy program in Afghanistan. Tim, a 28-year veteran of the Canadian Forces, landed in Kabul for a six-month tour starting in June 2013. His initial role was to provide English-language training to 750 Afghan pilots and mechanics. Within days he was appointed chief of the entire language and literacy division. Now that Isberg is back home, he is working toward balancing his career in the Forces and his other passion – music.

Kelly was named Dean of the College of Arts and Sciences at the University of Oklahoma in April. After graduating from Lethbridge College, Kelly went on to earn a Bachelor of Science in Criminal Justice/Police Science from Sam Houston State University in 1987, a Master of Arts in Sociology from Texas A&M University in 1991, and a PhD from the same institution in 1994. He taught justice studies and criminal justice courses before moving in 1997 to teach sociology at the University of Oklahoma. He moved into administration in 2004 and was named dean this year after a nationwide search.

Glenn and his wife, Janice, were among five individuals nominated by the Rotary Club of Lethbridge and The Lethbridge Herald for the annual Citizen of the Year award. The Varzaris were nominated for their support of numerous city organizations. Glenn is a former board chair who now co-chairs both the college’s The Possibilities are Endless fundraising campaign and the college’s wine auction. He is also a member of the Lethbridge College Hall of Fame.

New baby? New job? New hometown? Tell your classmates all about it by emailing WHMagazine@lethbridgecollege.ca. Be sure to include your name, your area of study, the year you completed your program and a little bit about what you have been doing since you left Lethbridge College.