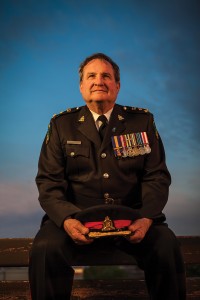 on a summer day in 1976 where he was assigned the “important” job of directing traffic during a parade.

While the young patrolman had prepared for – and probably hoped for – more challenging assignments during his time as a student at Lethbridge College, he had also spent the first 17 years of his life in an Edmonton home where connecting to the community was valued and patiently instilled in him and his three older brothers by their civic-minded parents and extended family.

“It seems I always had people in my life who had a keen interest in community,” McKenzie recalls. And so he embraced that first assignment, standing at the corner of 3rd Avenue and 5th Street, making sure no one came on the parade route, getting to know the people of his new community and setting the course for a distinguished career that spanned nearly four decades and culminated with him being named chief of the 200-person Lethbridge Regional Police Service seven years ago.

In October, Chief Tom McKenzie will retire from policing, saying the police service is in a good position at this point with a staff of outstanding employees and many solid partnerships in place. But he has no plans to stop being involved with his community, whether through his volunteer work with Special Olympics or while hitting the golf course with good friends. It has, after all, been the hallmark of his life and career.

“Tom really exemplifies community policing,” says Camrose Police Chief Darrell Kambeitz (Criminal Justice 1981), who was introduced to then-Officer McKenzie while he was a student at the college. They got to know each other well during their tenures as chiefs of Alberta police departments. “He’s in touch with his diverse community and their needs, and he structures the police service to meet those needs. I think it’s fair to say that Lethbridge is a better place to live because of Tom McKenzie.”

The early days of McKenzie’s career were spent walking the beat downtown, where “common sense and a sense of the law got you through things,” he says. “Things may have been less complicated, but they were not easier. There was homelessness and people with alcohol and drug addiction, and not as much support for mental health issues.”

The bars would close at 1 a.m., McKenzie recalls, and most parties seemed to end between 2 and 3 a.m. “So by 3 a.m. you almost didn’t see anyone moving until the paper guys started delivering and you’d see the city wake up,” he says with a smile. Today, he adds, officers are busy all night.

McKenzie says he has seen many other changes in the policing profession over the years — most of which benefit officers and the community. Among the biggest changes are improved technology and communication for officers; improved tools, training, practices and strategies for investigational work; and improved legislation for all Canadians. All of these improvements have changed the way police departments do their important work.

“But the nicest change of all is the ability and willingness to partner with others,” says McKenzie. “Good community and good government support has helped our ability to grow in areas of diversity, training, recruiting and investigational areas.”

McKenzie points out that about 70 per cent of a police department’s calls have to do with public disturbances and calls for service. But he has been called to the scene of some horrific crimes over the years – cases whose details are burned in his memory. “Even in those cases, though, you see the resilience of people even when they are facing the most terrible situations,” he says. “You see the horror of how some humans can treat each other, while recognizing that others are so supportive of each other.” And the highlights of his career remain the times he would bring a lost child home to his or her parents, or return a stolen item that had great sentimental value to the owner.

His work on all of these cases has garnered him the praise and affection of community leaders and colleagues.

“Tom McKenzie has earned the respect, trust and admiration of our community,” says Lethbridge Mayor Chris Spearman. “Prior to becoming police chief, he was instrumental in taking community policing in Lethbridge to a higher level. Our community has been fortunate to have a quality person like Tom leading our municipal police service the past seven years.”

Former Lethbridge Mayor Rajko Dodic says it was an honour to be a member of the Police Commission that selected McKenzie as chief in 2007. “I believe that time has borne out the fact that the decision to appoint Tom McKenzie as chief of police was an excellent one,” he says. “Our community has been well served with Chief McKenzie at the helm of the Lethbridge Regional Police Service and it will be no small task to find his replacement.”

Deputy Chief Colin Catonio (Criminal Justice 1980), who has worked with McKenzie for 35 years, says McKenzie’s record of engagement with a variety of community partners speaks volumes. “His thirst for community first has left its mark within the service,” says Catonio. “Tom has always understood the importance of community. He has always taken the time and expressed concern for the less fortunate, for those who have felt not well served by our service and for someone who just might need a little help. That compassion has been shared equally with our members who’ve found themselves in difficult situations.”

Inspector Jason Dobirstein (Criminal Justice 1991) says the chief’s passion for policing should be commended. “From daily correspondence, calls for service and policing operations to challenging leadership decisions, Chief McKenzie’s knowledge of the service from top to bottom is impressive,” says Dobirstein. “Chief McKenzie has an uncanny ability to recall investigations and operational briefings as if he had completed the documents or investigation himself. Oftentimes after many staff have left for the day, Chief McKenzie can still be found in his office working away.”

Kambeitz, the Camrose chief, adds that McKenzie is “always the first individual to pick up the phone and extend courtesies or sympathies and support to another agency, especially in a time of crisis. About five years ago, we faced a crisis at the jamboree – we had a stage collapse that killed one and injured 15, four critically. Tom was one of the first individuals to call. He said he would extend any support the LRPS could offer – and that is a common theme you hear from other chiefs. He offers immediate help to those in need.”

McKenzie says he’s made it a deliberate point to approach everyone he works with the same way. “You have to respect everyone,” he says. “You have to picture who you love the most, and put that face on the face of every person you are dealing with – the victim, the witness and the accused.”

It is a perspective that has served him well since that first day 38 years ago and will likely serve him well in retirement. He has a few more tasks waiting for him before that day, too, including one very important job – another parade. This time he won’t be controlling traffic, though. Instead, at the start of this year’s Whoop-Up Days Parade in August, Chief Tom McKenzie took his place as the honorary parade marshal, leading the way one last time.

A CHIEF AND A CHAMPION:

On Convocation day at Lethbridge College, the platform that all graduates cross is awash with colour – from the academic robes of the President, deans and instructors to the traditional clothing of members of the First Nations, Métis and Inuit community to the shiny brass medals and ribbons on the uniform of Lethbridge Regional Police Chief Tom McKenzie.

McKenzie is an essential part of that group that celebrates Lethbridge College students each year as they become alumni, and it is one of the many ways that the chief gives his energy and interest to his alma mater, Lethbridge College. In addition to being named a Distinguished Alumnus in 2008, McKenzie has occasionally worked as an instructor and has long been a dedicated advocate of Lethbridge College.

Marty Thomsen (Criminal Justice 1988), Dean of Justice and Human Services at Lethbridge College, says McKenzie’s support of the college and its programs and people is phenomenal. “He really does care,” Thomsen says. “He’s not just giving lip service. On Convocation day, he’ll give a big hug to some of his students as they cross the stage.”

Thomsen adds that McKenzie is a true “people person” who is a great supporter not only of the college but of people throughout the entire, diverse southern Alberta region. “He’s engaged with the community, he listens to the community, and he’s involved in the community,” Thomson says. “And in particular, he has been praised by many for his work with the First Nations, Métis and Inuit (FNMI) community. His level of engagement within the FNMI community is really one of his most outstanding attributes.”

McKenzie is a member of the Kainai Head Dress Society of the Blood Reserve and has received a Blackfoot name – Mistaki-ikistaki, which means Mountain Offering and was bestowed on him for his kindness and support of the Blackfoot people.

Merle Fuller, Executive Director of the Alberta Association of Chiefs of Police (AACP) and an instructor at the college, describes McKenzie as “a class act” who taught what community policing was before it became fashionable.

“Tom always challenged us as young cops to look beyond the behaviours of the individual and seek to understand the person behind the event,” says Fuller. “He has great passion for the ‘down and outers’ of life and vigorously defended them if he thought he needed to do so. Tom wasn’t perfect by any means, but he was a perfect example of a good street cop and grassroots chief of police who is deeply respected by all members of the AACP. We will miss him at our table.”

McKenzie’s support for Lethbridge College is well known in the policing community across the province. McKenzie has been a member of the Lethbridge College Alumni Advisory Committee since 2008 and sits on the Criminal Justice Advisory Committee. “Tom is truly a champion for the college and all of its programs,” says Camrose Police Chief Darrell Kambeitz. “He never let his colleagues forget about the college.”

Chief Tom McKenzie smiles as he listens to a speaker at the April 2014 Convocation in the Val Matteotti Gymnasium. McKenzie, who graduated from Lethbridge College in 1976, has been a regular attendee at convocation during his tenure as chief of the Lethbridge Regional Police Service. He will retire this October.

Lethbridge College President and CEO Dr. Paula Burns met McKenzie when she was interviewing for the job of president and knew immediately he was an exceptional part of the community. “Tom was one of the people at my community interview lunch, and what struck me about him was that he asked how I intended to get involved in the community in addition to what my role at the college might entail,” Burns says. “I knew he was a great citizen in a way that went beyond his role as the chief of police.”