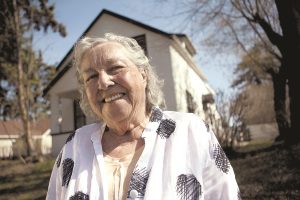 would be strong and independent. In her work and in her life, she has lived up to her father’s words, whether by fleeing her abusive husband with her small children when she was in her 20s, or by speaking passionately about Aboriginal women’s issues in Canada’s Senate, where she was appointed in 1997 by Prime Minister Jean Chrétien as Canada’s first Métis and Aboriginal woman senator.

“I won’t back down and people know that,” Chalifoux said in a 2005 article by Shannon Sutherland in Alberta Venture magazine. “I used to run down the halls in the House of Commons when I had an issue and literally chase people down, shouting after them. They knew they couldn’t get away from me.”

She didn’t back down when she found herself a single mother with seven children in the 1960s. With a grade nine education, she returned to school and work, and eventually enrolled in classes at what was then Lethbridge Junior College in 1968. Two of her sons, Bob and Scott, who were 19 and 18 at the time, joined her as students on campus. “It was a real mother-son experience,” Bob Coulter says with a laugh. “We were all part of the yearbook committee, and all enrolled in a humanities class taught by Mr. Schmidt. We loved him. He was a great teacher and a really very open-minded guy. He really got us thinking about governments and social responsibility and having a social conscience.” Coulter says the lessons Mr. Schmidt taught in that Lethbridge College classroom stayed with all three throughout their lives.

“He was a little known but huge influence on mom and the rest of us,” Coulter says. “He could back up philosophical arguments and that was important. At our house, if you didn’t have a point of view at the dinner table you were in peril. You had to defend your position. And so we talked about social responsibility and what we were learning in the classroom in the context of the Aboriginal community and the Métis. When you extrapolate that out, what a huge difference he made, not only in our lives but in the lives of thousands of people in Mom’s case.”

Coulter says the Lethbridge College campus seemed very open to First Nations and Métis students during this time, even though it was less than a decade after Aboriginal peoples were given the right to vote in Canada without having to give up any treaty rights in exchange.

“The college faculty was accepting,” he recalls. “It was all about ideas – the exchange of ideas. If you had a point of view you were heard and acknowledged. You weren’t told you were wrong because of your colour or racial background, but you did have to defend your ideas based on your intellect and your mind.”

After two semesters, Chalifoux became ill with pancreatitis, so she and her family returned to northern Alberta. She went on to study at other post-secondary institutions and became the first Aboriginal woman to broadcast on commercial radio on CKXL Radio Peace River. She later spent time as a land claims negotiator, a social activist in the community development movement with the Company of Young Canadians, a social worker, an educator, and a founder of the Slave Lake Native Friendship Centre.

“She’s been a big influence in all of our lives,” says her daughter Sharon Morin, who works at the Michif Cultural and Research Institute in St. Albert that Chalifoux helped to found after leaving the Senate. “We all strive to be like her in some aspect.”

One of her son’s favorite stories to tell is about her work advocating for the Cree language, and in particular the time when Chalifoux received the call from Prime Minister Chrétien to formally invite her to join the upper chamber.

“I was in the room with her when the call came,” Coulter says. “The prime minister said ‘We need you in the Senate,’ and then he asked if she spoke French. She replied ‘No’ – in Cree. They both laughed.” The family was sworn to secrecy for several days before the prime minister made his announcement, and Coulter says they spent that time “talking about how this could happen, that this little Métis gal who struggled as a single mom could be named to the Senate.”

Chalifoux’s work in the Senate from 1997 until her mandatory retirement in 2004 at the age of 75 is still vividly recalled by her colleagues.

“Thelma Chalifoux was such a wonderful presence of wisdom and generosity and warmth and good cheer,” says Sen. Joan Fraser of Quebec. “She was in many, many ways a role model, particularly for the women in the Senate. She helped to deepen my understanding of Aboriginal issues significantly.” Sen. Fraser was sorry to see Sen. Chalifoux retire. “She taught me many things about being a good person – and she taught me something about the Senate as well,” says Sen. Fraser. “I remember she said to me one day ‘Senators are Elders,’ and she of course herself is a Métis Elder. What a beautiful way to sum up what we do.”

Senator Maria Chaput of Manitoba agreed that Chalifoux was an outstanding advocate for Aboriginal and Métis issues. “Thelma cared very much about Aboriginal issues and she always spoke in the Senate about what needed to be changed for the best of her people,” says Sen. Chaput. “She was always diplomatic and collaborated with her colleagues and tried to change things for her community and her people. She had the respect of her colleagues, even though they might not have agreed with her. Some of her colleagues maybe needed to know more about the reality facing many Aboriginal people and especially women. She wasn’t scared to speak, and she wasn’t scared to work.”

Sen. Pana Merchant from Saskatchewan vividly recalls a speech Sen. Chalifoux delivered in the Senate to bring attention to the particular challenges of Aboriginal women residing in northern Canada.

“Aboriginal women continue to face enormous barriers when seeking to solve their problems by way of accessing fairness and access to services in remote parts of our nation, a task that most women take for granted in southern Canada,” Sen. Merchant says. “It was my pleasure to work with her and learn from her. Her early life experiences became the forceful backdrop to a long and distinguished public career culminating in being summoned to the Senate of Canada. On her arrival in Canada’s upper chamber of parliament she brought her passion of purpose that had been accumulated by her championing of many urgent and noble causes.”

Sen. Mobina Jaffer of British Columbia, who is Canada’s first Muslim senator, first African-born senator, and first senator of South Asian descent, says Sen. Chalifoux accomplished much as Canada’s first Métis woman senator. “Sen. Chalifoux changed the way the Senate looked at issues,” says Sen. Jaffer. “She brought the reality of Métis and Aboriginal issues to the Senate, especially about women. She never said no to taking on any challenge. She showed me what inner strength was all about.”

While Lethbridge College’s Métis Elder Rod McLeod (Child and Youth Care 2003) never met Chalifoux personally, he is familiar and appreciative of her work.

“Sen. Chalifoux is someone we can all look up to,” McLeod says. “She raised a family of seven, went through so many hardships and did so much good work. She is a role model for all of us.”

After leaving the Senate, where Chalifoux worked closely with her children Bob and Debbie, she gave her time to the Michif Cultural Centre with her daughter Sharon, and was an Elder at NAIT and for the Canadian Armed Forces Edmonton Garrison. She remained an ardent advocate for Métis, Aboriginal and women’s issues as well as a loving mother, grandmother and great-grandmother, although in recent years, her son says, she has been struggling with memory loss. “Now I bring my pictures and we just start talking about the good old days and all of the stories,” Bob Coulter says.

Over the years, the Honourable Thelma Chalifoux has been called a force, a firecracker and a voice for the underprivileged – including during her days as a student at Lethbridge College. But above all, she has been a bold leader whose legacy still flourishes in the province and through the country.

“Sen. Thelma Chalifoux gave us a wake-up call about the reality of Aboriginal and Métis people, and women especially,” says Sen. Jaffer. “Her work continues now with other senators but she really opened our minds. She absolutely was a trailblazer, but more than that, she set a fire here. She made us wake up and see we have to be more responsible for all people. She taught us that it doesn’t matter how much you have – there is always more to give.”