On race day, Kip Kangogo says, everyone is nervous.

If you’re not nervous, adds the nationally-ranked marathon and half-marathon runner and former Kodiak, 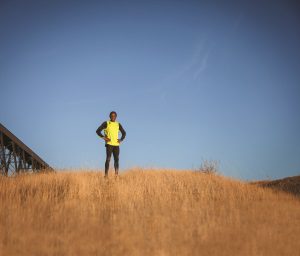 you’re not normal. You have to be a little nervous to run your best. Kangogo says you should prepare yourself as much as you can before the race. Visualize the race, anticipate what could go wrong and do everything possible to think how you will respond.

And then, he says, the race is yours to run.

“By the time you are standing at the starting line, all of your training has been done,” he says. “You take off. Elbows fly. It’s like a stampede. You try to find a rhythm and position yourself. You stay awake. You get in the zone. You think about the finish line. If someone is getting close, you have to respond and decide when to make your move.”

You can’t hesitate, he adds. Every time you hesitate, you become weak. So you make a decision and go. And then you’ll cross the finish line and know you did all you could to make it happen. “Even if you’re in second,” he says, “if you did your best, you’ll be happy.”

This is a formula that has worked well for Kangogo, who came to Lethbridge from Kabarnet, Kenya, in August 2001 to study and run for the Kodiaks.

“When I left my native Kenya, I came with focus and ambition to change my future,” this soft-spoken father of a one-year-old girl says, remembering the details like they took place last month, and not 13 summers ago. “I had a partial scholarship but had to fundraise for other tuition and living expenses at home. I started registering for classes, going to practice, running in the snow. I never missed a practice – even in the snow. It opened up so many doors for me, being the fastest student in school history. ”

And with Kangogo’s arrival, which was shepherded by cross country running coach Bertil Johansson, cross country at Lethbridge College started to boom. After Kangogo won every race he ran his first year at the college, including those at the provincial and national level, Lethbridge College men’s and women’s runners have raced their way to nine gold, two silver and four bronze medals since the CCAA started hosting national tournaments in 2002. And even after he left, Kangogo helped recruit many of the best runners who followed him, including his brother Ed Kangogo, as well as star athletes Gladys Kochei, Rogers Sergon, and Purity Kandie, among others.

“Kip really helped put us on the map,” says Johansson, who has been coaching at the college since 1987. Kangogo left the college after a year when he was offered a full-ride scholarship to compete at Brigham Young University and later at Texas Christian University, “But I stayed in touch with Bertil and talked to him about what (the other Kenyan runners from my area) were capable of doing – if they had discipline, if they were willing to run to obtain their education, if they were coachable,” Kangogo explains. “It all goes hand in hand.” During his time running in the United States, Kangogo was named an NCAA All-American, was named the most inspiring male athlete at BYU and broke the school record at TCU. After finishing his studies in 2007, he returned to Lethbridge. “I always knew I wanted to come back to Canada, and knew this was a country I’d like to call home and raise a family,” he explains.

During his first years back, he worked as an assistant coach at the college, helping coach the team to a national title in 2008-09. After that season, he decided to shift the focus to his own running – and he has been winning 5Ks, 10Ks and half marathons and marathons ever since. “In the past three or four years,” says Johansson, “Kip has been a leader in Canada on the road race circuit. He’s made a name for himself and for Lethbridge College.”

Kangogo’s most recent victories were especially sweet for different reasons. On April 27, he won the TC10K in Victoria – the first race he won as a Canadian citizen. And then on June 1, he won the 50th Scotiabank Calgary Marathon and broke a course record – on his daughter Emma’s first birthday. By late June, Kangogo was ranked fifth in the country in both the marathon and half-marathon, and he hopes to run for Canada in the marathon in the 2016 Olympics. “The marathon is so special,” he says. “You’ve got to have respect for the distance. To run that race is a dream come true.

Johansson says Kangogo has been a quiet leader since his first days at the college. When people tell him that, Kangogo replies that “fulfilling that means having responsibility to be what people see. And when they see goodness in a person, they want to do good, too.”

Kangogo now spends his time training and making a home in Lethbridge with his wife, Florida, whom he married in 2011 in his Kenyan village in a wedding that more than 1,000 people attended, and their daughter. He visualizes the next race, and the one after that, and the one after that, where he knows he’ll be nervous and where he plans to give his all to make it happen, just as he has been doing since the day he landed at the Lethbridge airport and met Coach Johansson. “When I first came to Lethbridge College, that’s when my life started to open up,” he says. “And I feel like I left my footprint at Lethbridge College.”