In the Fall 2013 issue of Wider Horizons, we ran a short story on the history of the D.A. Electric Barn, 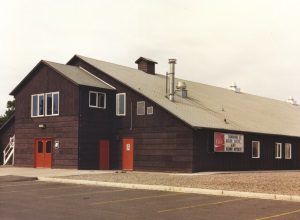 the oldest building on campus and the scene of countless great moments for many Lethbridge College alumni and staff. We put out a call in the magazine and on Facebook for our readers and alumni to share their own Barn memories. Here are just a few of the tales that could be told in print and online. Feel free to send your own Barn stories to WHMagazine@lethbridgecollege.ca.

There are sooooo many good memories of The Barn, including Roger Binne’s worn out, blown out, 100,000 km work boots thrown up to the rafters after graduation in 1979. They hung there for well over 10 years. I doubt that too many if any other college had a place and atmosphere like The Barn, a place where Environmental Science students played snooker and socialized with their instructors. Dave Manz (soils and water) was a pretty decent snooker player. John Nagy (wildlife and zoology) not so much! Still the BEST YEARS of my life, bar none!
André Desrosiers
Environmental Science 1979

During an administrative emergency in the spring of 1966, I was pressed into service as Acting Principal of Lethbridge Junior College. In the summer of 1966 the LJC Board appointed me with enthusiasm as Dean of the LJC University Section. A few months later, the board fired me from the post with equal enthusiasm. During my brief stint as a senior LJC academic administrator, I recruited a lively young Californian by the name of Pauline McGeorge as the first ever college art instructor. When she arrived in a gaudily painted VW van, an icon of that hippie era, she quickly discovered that there were neither facilities nor space for the new art program. So we fixed up an area at the east end of The Barn, then notorious for the student social events there on the weekends, as ramshackle Art offices and space, with the main hall becoming during the weekdays a gloriously spacious studio for the artists. I recall visiting Pauline and her students hard at work over there, and especially the term-ending exhibition of student works arrayed around the walls. The artists performed there until 1971 when the University of Lethbridge moved into its new west side campus.
Owen Holmes
Professor Emeritus,
University of Lethbridge

I attended Lethbridge College in the fall of 1973 when I was in grade 12 after a summer of riding with the LCC Equestrian Team. I was 17 years old. My first event at The Barn was a Halloween Party and dance with my “soon-to-be” husband (now ex) and a group of friends in 1976. I recall dressing as a jockey (my love for horses) and he as a pilot (he had a pilot’s license and his own plane). Returning to live in Lethbridge after decades away, I next set foot in The Barn in January 2007 to attend Campus Rec ballroom dance classes. It was in that class that I met my “soon-to-be” boyfriend. The following semester, I was sad to learn that we would no longer be dancing in The Barn. Too bad as I had fond dance memories in this building.
Karen Hanna
Continuing Education Instructor at Lethbridge College

The Barn is like my happy place! The beer, the dances, the beer, the parties, the beer...you get the picture. My favourite memory was some guy from Law Enforcement who wanted to pick a fight with me. I’m a lover and not a fighter, but he wouldn’t give up. Finally my roommate, Phil Cherney, who was a fighter and not a lover, took Mr. Law Enforcement outside. Never saw Mr. Law Enforcement again that night and he never bothered me or any of the other Communications Arts crowd again. Thanks, Phil, for being my college big brother.
Rick Lewchuk
Broadcast Journalism 1979

After Shinearama in September 1995, The Barn hosted a volleyball game between the college and the U of L volunteers. At some point during that game, I threw the ball over to the U of L team and hit a girl right in the head. Afterwards I went to apologize and we got to talking. Now we’ve been married for 14 years and have a couple kids. I loved The Barn! (And oh yeah, if you listen to Carol Bilawchuk’s version, I spiked it in her face.)
Mark Bilawchuk
Communication Arts 1996

Oh the memories! One of my favourites was attending my first nuts and bolts cabaret at Lethbridge College! I loved all of the cabaret dances, the pub Fridays, the concerts! Loved every minute of it!!
Allen Ivanco
Communication Arts 1996

I have so many fond memories of The Barn, from working with Students’ Council to do the renovations to it in '86, to running the cabs and events as Special Events Coordinator, to working at the college and running it for Students’ Council in '93. Awesome pool tables, great cabarets and more than a few nights praying to the porcelain God back in residence when I found my way home. Surprised I survived those years!
Andrew Gilchrist
Criminal Justice-Policing, 1987

Way too many "cocktails" after class!
Bill Gergely
Business Administration 1978

Whoa. Seeing the photo brings back sooo many good memories! I loved working there, made some great friends, and danced my butt off to awesome bands.
Jehnifer Benoit
Community Television 1997