In Lethbridge College’s more recent history, the D.A. Electric Barn was best known as the place to be when classe 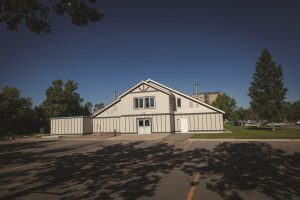 Alumni and former faculty and staff members can tell some impressive tales of evenings well spent at the Barn. Dave McRae, Environmental Sciences instructor and alumnus (‘84 RRM Parks Management), says back then it was like a big family on a journey together. “It was during these socials that we got to know our instructors on a different level,” he says. “As students we appreciated the Barn as a safe, inexpensive place to relax and get to know each other.”

But the building has many more great stories to tell than those that were shared over a pitcher of beer and hot wings on a Friday night.

Belinda Crowson, museum educator at the Galt Museum and Archives, explains that the Barn’s history goes back even beyond the earliest days of the college. Lethbridge College resides on land that was once owned by the David J. Whitney family. Crowson says that in 1955, James N. Murdoch (better known as Bus Murdoch) purchased the Whitney property and had big plans to convert the 85-acre Fort Whoop-Up Ranch into a destination dude ranch. “He was going to make it into a dude ranch with dining room, tourist cabins, golf driving range, and a track for stock car races,” Crowson says.

Stock car racing didn’t last long at the ranch, Crowson says, moving instead to the Exhibition Grounds, and “most of Murdoch’s grandiose schemes were never realized and he eventually left the community” for California.

The Round-Up Room for Murdoch’s dude ranch is now known as the Barn. Newspaper articles list it as the site for Lethbridge’s first rock-and-roll concert, the place where more than 2,000 people clapped, whistled and danced on June 23, 1956, as Bill Haley and His Comets played “Rock Around the Clock” and other favourites.

In the early 1960s, construction started on Lethbridge College’s campus and the first building opened in 1962. Today, the only part of the Fort Whoop-up Guest Ranch construction remaining on campus is the Round-up Room – better known as the Barn.

TELL US YOUR BARN STORY

Wider Horizons wants to hear from you. Do you have stories or photos about the Barn (at least those that can be shared with the public?). If so, drop by the Advancement office on campus and ask for Lisa Kozleski, or send an email to WHMagazine@lethbridgecollege.ca. We plan to run your stories and photos in a future issue of the magazine.