From its humble beginnings in Pincher Creek to recent national recognition, 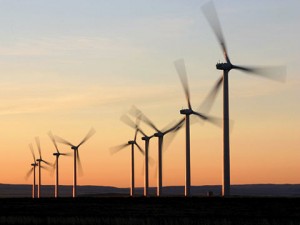 Overcoming Canada’s dependency on petroleum has become a towering challenge, one in which Lethbridge College has become a central player in the last four years. Since it set up its initial Wind Turbine Technician training program in 2005, the college has gained international recognition, both for the quality of its curriculum and its leadership in the field.

“The wind industry is amazed at what we have here,” says Suzanne Flannigan, Lethbridge College’s dean in the Centre for Applied Management. “We were a best-kept secret, but now we’re endeavouring to let everyone know what we can provide.

We have committed and passionate people involved who have galvanized the entire area.”

Trained in Germany as instructors to BZEE certification, they made the college the first in North America to offer a program recognized as meeting world standards.

BZEE, or Bildungszentrum für Erneuerbare Energien e.V., is the German organization formed by major wind power industry players in the country and is recognized as the Rolls Royce of training in the wind turbine industry. Train to BZEE standards, and you can work anywhere in the world.

“Manufacturers and wind farm developers are happy with us because our curriculum is industry-driven” says Vermeer. “Most colleges in the U.S. have never talked to industry and have no equipment on which to train.”

Lethbridge College bought nine nacels (the actual guts of the equipment), five towers and three blades from a decommissioned wind farm to use for hands-on training. It was a strategic move, because such items are now impossible to locate.

The college began the program as a cost-recovery venture rather than a credit program, and while that is changing, the financial possibilities still exist: a plan is in the works to ship one complete nacel to a college in Michigan, an institute that would pay to deliver the “made in southern Alberta” course to American students. Talks are also under way with colleges in

Employment in the wind-power industry is expected to grow rapidly; a chunk of the jobs it will create are centred on installation and repair, specialized training Lethbridge College delivers to some 32 students per course, twice a year. The 26-week course this fall and the first intake for 2010 were filled months ago.

Once taught in the college’s animal husbandry facility on the Jail Road, the course hopes to move into the Trades Wing on campus, but space and trained instructors still limit student numbers. A third instructor has been hired and will be sent to Germany for BZEE training. “We’re trying to grow in step with industry needs,” says Vermeer.

Those needs are about to explode. Alberta has removed its 900-megawatt cap on wind power, a restriction that kept employment tied to attrition only. This past summer, 150 turbines were to be installed in the south. In just two phone calls, Vermeer was asked if he could supply 65 employees. The students he did have on campus graduated July 3 and were working three days later.

All turbines do is produce raw power; to make it usable, it has to be delivered by power line to the end user, much like a pipeline takes oil to a refinery. In southern Alberta, that means the line from Pincher Creek to Lethbridge, a point at which it heads north to Calgary.

The line has been woefully inadequate, and the Alberta government seems reticent to increase its capacity. That bottleneck appears to be easing, and with it will come an increased demand for wind power.

“It’s been frustrating,” says Vermeer. “We have a great program based on the college’s  own money and industry donations, but we do need a stronger investment by government.”

The college actually built the program, invested in equipment and had things running before receiving support from any level of government. Approximately $225,000 in Enrolment Planning Envelope (EPE) funding was made available through Advanced Education and Technology in Alberta on a one-time basis to purchase some additional training equipment.

EPE funding is also provided to increase accessibility for students, but the amount received is less than the actual cost to deliver the program and limits the college from being able to meet demand for seats. Flannigan feels Vermeer’s frustration.

“I’ve been involved in the development of a lot of business plans, and I have never seen a greater combination of competitive advantages like this one. Yet, we stand to lose ground; it cannot be overstated: we now need support from the government.”

Greg Peterson, Lethbridge College’s program administrator of Industrial and Technical Training, spearheaded Lethbridge College’s wind turbine technician program four years ago and remains a vocal supporter of the industry’s growth. He notes southern Alberta is producing 560 megawatts now and expects to hit 2,600 in the next bump.

“Companies are lined up across North America,” says Peterson. “Wind power is the fastest growing industry in the world and the most recession-proof. We’ve sent out grads across Canada and the U.S., one to Ireland and one to Mongolia. We’ve grown from 12 students a year to 32 and we could go to 48. We’re a leader in safety training. We feel we’re world-class now, but we need to push to be even better.”

The growth will come with the political will. Vermeer notes the desire is to push for 11,000 megawatts of wind power in Alberta, but suggests there isn’t enough money available to buy the required turbines. Much of the best land is already leased in anticipation; land that delivers what Vermeer says is “good wind,” shortening the payback period by producing uninterrupted power.

“Turbines won’t work anywhere,” he says. “You need long-term, consistent winds, not gusts. There are pockets throughout Alberta, such as Edmonton, Stettler, Brooks, Medicine Hat, Warner, along the Milk River Ridge and, of course the traditional areas near Pincher Creek. One of the best is near Magrath.”

Each turbine is capable of turning out one to 1.5 megawatts, enough to power 1,000 homes; 20 turbines would be enough to light up Lethbridge.

Lethbridge College is set to erect two complete turbines on 25- and 55-metre towers south of its trades area, which will allow greater hands-on involvement and complete safety training. Prior to the towers, the college conducted its high-level training by rappelling off Ric’s Grill atop the city’s retired water tower.

“Ultimately, we want to create a wind energy academy,” says Flannigan, under whose area the college’s wind-power initiatives fall. “With our one great advantage – good quality, concentrated wind – we envision becoming a centre for excellence in the industry.”

Flannigan notes Lethbridge College has made its way onto the world stage, and is now becoming a voice for creating a national wind-energy standard.

“In Europe, they went for decades without any standards before BZEE came into play,” she says. “We’re in a good place to develop that kind of standard here. Lethbridge College wants to be a contributor in that process.”

“It’s taken 1½ years for people to believe in us,” says Flannigan. “The national powers are recognizing that we’re doing what we said we would.”