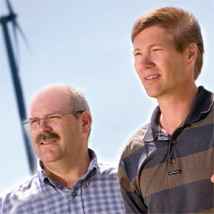 apply for one additional piece of documentation when they graduate: a passport.

The non-credit program, firmly established in the industry since the College created it in 2005, will soon benefit from years of European know-how, providing students with credentials accepted worldwide.

John Vermeer, chair of the College’s Electrical Apprenticeship program, and Mike Wehrwein, an instructor in the Engineering Design and Drafting Technology program, were in Germany for five weeks in April and May, completing a crash course in what future students will learn.

He and Mike are now qualified to deliver BZEE certified training to students at Lethbridge College. He hopes to have the standards implemented by the program’s next intake in January.

Upon graduating with BZEE-certification, Lethbridge College students will be able to work almost anywhere in Europe, and in many places beyond. But that doesn’t mean graduates can’t stay close to home. Most major turbine producers are associated with BZEE, and when the companies want to set up wind farms in Canada, they will look for technicians with BZEE certification. This creates an opportunity for Lethbridge College to play a lead role in that process.

“We would like to make Lethbridge College the place in North America for anyone who wanted to work in the wind turbine industry,” says John. “Because we have this now internationally recognized certification that we can provide, we can become the place (for wind turbine education).”

Based on BZEE’s Wind skill program, applicants will be screened and elected to participate based on prerequisites, and will be tested on their ability to work at heights before being interviewed. They will then undergo six months of training in industry-related courses, followed by a six week internship and final exams. BZEE will assist in selecting students and help Lethbridge College modify its program to meet the German organization’s standards.

“They (wind power companies) may get 30 people that apply for the job,” he says. “Now they have to go through an interview process, which is a considerable amount of work. Then, in order to even test them at heights, they have to first give them safety training. And then, once they have safety training, they can put them up at heights to see if they can work. If they (the employees) wash out, that’s been a considerable expense to the company.”

“We’re basically doing all that screening for them,” adds Mike.

In the future, the growing demand for wind power may be reflected in existing Lethbridge College programs. Environmental sciences students might learn how to determine the environmental impact of wind farms, and ways to mitigate that impact, while geomatics students could learn how to choose the most efficient locations for wind farms. The amount of wind power produced in Canada more than doubled between 2005 and 2006, jumping to 1459 MW from 683 MW, according to the Global Wind Energy Council.

“In places like Canada and the U.S., because of our huge landmass, we're able to put wind farms in without adversely affecting large groups of people,” says John.

No colleges in North America offer BZEE certified training, and no U.S. colleges attended the German seminar in April. Of the five Canadian colleges who attended, only two have existing wind turbine technician programs, Lethbridge and a French language college in Quebec. Since a prerequisite of BZEE certification is fluency in English, Lethbridge has a distinct advantage over other colleges offering the training and has exclusive rights to offer the certification in Alberta.

“We have experience, and we have really good ties to industry,” says Mike. Of course Lethbridge College also enjoys a geographical advantage: a close proximity to large wind farms, allowing it to easily fulfill the internships BZEE requires.

The West’s booming wind power industry holds much promise for future graduates; a recent announcement from Montana indicated 200 turbines will be installed there soon.

“The place that has the most turbines is going to have the most work,” says John. “I was just speaking with a person from the (Montana) company and (he) said they would hire every graduate we could put out in the next year.”