Half a century later, our first grads prove the kids were alright. 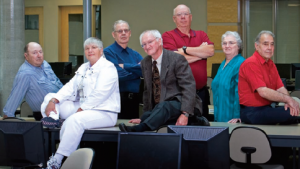 It’s been half a century since they were among the first students at Lethbridge Junior College,  but Barbara, Betty, Dick, Fiori, Jim, Julian, Leonard, Les, Wayne and Yvonne still answer “present” to the roll call.

A month after classes began that storied autumn, the Soviet Union started a space race by firing an 83-kilogram metal ball called Sputnik into an earth orbit; a Prairie populist named John Diefenbaker moved from Prince Albert, Sask., to 24 Sussex Drive; Bridge On The River Kwai was chosen best film of the year and the medical profession first announced a connection between smoking and lung cancer.

Wider Horizons tracked down the 10 students, and discovered just how much of an influence that first brush with post-secondary education had on their lives.

Jim Gaicchetta is an alumnus of the first automotive trades program. “The courses prepared me for an apprenticeship and from there I worked in the farm implement industry,” he says. “While the curriculum wasn’t always clearly defined it was certainly a starting point.” Ultimately, his training prepared him for an 18-year career with Lethbridge Transit, a position from which he retired in 1998.

Jim’s experience attests to Julian Vincze’s belief that “success has nothing to do with whether an institution is top rated or not. It’s what you do with an opportunity; it’s what you learn and take away from the experience what matters,” he says. After completing his first year of academic studies at LJC, Julian went on to earn an undergraduate degree from the University of Montana, a Master of Business administration from the University of Western Ontario, and a Ph.D. from Britain’s University of Bradford.

Now an Emeritus Professor at Rollins College in Florida, Julian attributes his personal and academic success to his ability to manage change. “Working with young people has enabled me to be challenged on a constant basis; it’s prevented me from becoming mentally staid,” he explains.

Like many of her generation Betty (Day) Smith came from a large farm family, the oldest of six girls.

A tuition bursary from her local school division and the college’s close proximity to Pincher Creek made all the difference for her: “The availability of a junior college was a real turning point for women’s education in southern Alberta,” she says firmly.

After receiving her teaching certificate, Betty went on to earn a Bachelor of Education degree with a major/minor in library sciences. For the greater part of her 29-year career she was employed as a teacher-librarian in the Pincher Creek area, making her retirement official in 1994.

Dick and Yvonne (Nicol) Kerber were also raised on farms, both near Coalhurst. “That was the best education of all,” Dick says with a laugh. “I knew I didn’t want to work that close to the ground!” Like Betty, they received bursaries from their local school division. It wasn’t until they had earned their teaching certificates, were employed as teachers and were attending summer school in pursuit of their teaching degrees, however, that their romance began.

Yvonne explains: “Attending LJC was a huge responsibility. Failure was unacceptable. We needed to demonstrate that we were on solid ground or it could mean the end of the college.” While he never lost his love of teaching, Dick devoted much of his career to administration. After teaching in Coaldale for several years, Yvonne became involved in a wide variety of community development initiatives.

Although Leonard Simpson was enrolled in the general academic studies program, enabling him to earn a Bachelor of Science degree in chemistry, he became a teacher as well, instructing at Lethbridge Collegiate for 32 years. Because he had inherited property in Hillspring, he later retired there. He and his wife now operate a summer art galley called, The Dam Gallery, named for the nearby storage dam.

Fiori D’Andrea was likewise enrolled in general studies. Although he had full intentions of studying pre-medicine, he earned a Bachelor of Science degree (1963) in Film and Television Production from Montana State College. In 1981 he earned a Master of Arts in Education from San Jose State University. From 1971 to 1987 Fiori brought his knowledge and skills home to work at Lethbridge College. He currently works part-time at Sears.

Wayne Anderson was determined to do things at his own pace. He has the distinction of being the first one to receive a student number from LJC, but he sheepishly admits that he “blew things” that first year. Although he embarked on a career in soil sciences he continued to be obsessed with “rectifying” his past. In 1966 he returned to LJC to continue his studies. By this time the University of Lethbridge had been established. In 1973 he was awarded a Bachelor of Arts in Science and Geography from the U of L.

Les Lavkulich is an alumnus who has spent the greater part of his career in Vancouver. After completing his first year at LJC he earned a Bachelor of Science in Agriculture (1961) from the University of Alberta, followed by a Master’s degree in 1963; and finally a PhD from Cornell University in New York. Although his official retirement date was in July 2004, he continues to teach and conduct research at the University of British Columbia. “It keeps me off the streets,” he says with a laugh.

Finally, Barb (Kirk) Bosnak was enrolled in LJC’s medical/dental program. After moving to Calgary with her husband she committed herself to raising a family. Upon returning to the workforce she spent several years in the hospitality industry.