Lethbridge College has chosen the recipients of its 2013 Distinguished Alumni Awards. These four individuals are among the many accomplished people who credit their time at Lethbridge College for their successes.

“We are incredibly pleased to recognize our alumni at this event each year,” says John Milder (Agricultural Technology ’81), Alumni Advisory Council Chair. “These individuals play such important roles in our community, in industry and in post-secondary education.” 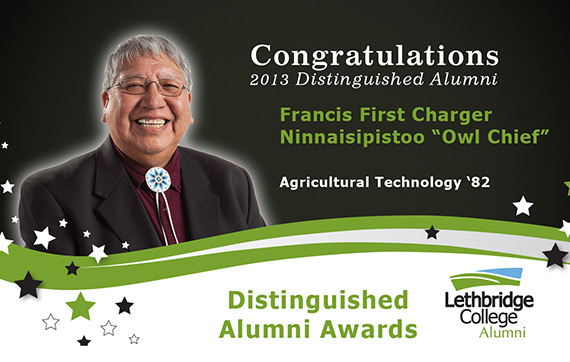 Francis First Charger Ninnaisipistoo “Owl Chief” (Agricultural Technology, ‘82)has received the top award of Distinguished Alumnus. First Charger is recognized as a Blackfoot elder according to traditional Blackfoot protocol and is the owner and manager of his own consultancy group. First Charger is known for his work with youth, students and the Blood Tribe community and is frequently called on as a guest speaker on the topics of education, the environment and cultural relevance locally, regionally and throughout North America. His community contributions range from work on affordable housing initiatives with the city of Lethbridge to the successfully coordination of the “First Nations’ Land Use Certificate Program” with 12 graduates from Red Crow Community College to the successful oversight of the construction phase of the $66.5 million Blood Tribe irrigation project between 1990 and 2000. His work teaching community members about learning opportunities, cultural awareness and traditions of the Blackfoot people “has promoted the wealth of diversity within the community and promotes natural heritage of the region.” He has been praised by many for his wisdom, teaching and advice to build a welcoming and inclusive community. 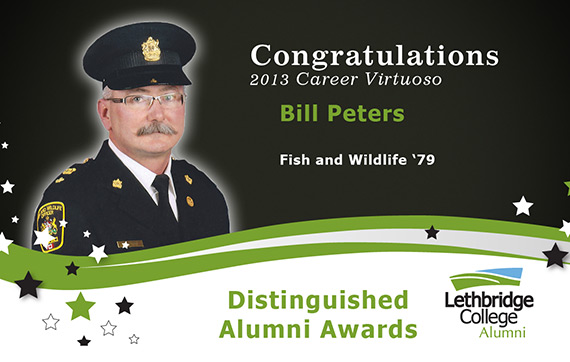 The award for Career Virtuoso goes to William (Bill) Peters (Fish and Wildlife, ’79). He is recognized for working tirelessly in a distinguished career of conserving valuable wildlife and fisheries resources in the province and across the country. He works as a fish and wildlife enforcement manager, engaging in field operations with officers and support staff members who are stationed within his area – Evansburg, Edson, Hinton and Grand Cache fish and wildlife districts. He has been honoured for his outstanding achievement both local and globally, including being named Officer of the Year by the Government of Alberta in 1988 and by two international organizations in 1989, the North American Wildlife Officer’s Association and the Shikar Safari. He has been praised for his ethics and value system and is recognized as an outstanding mentor, supervisor and trainer. Many Lethbridge College alumni have benefitted from his experience and instruction and he promotes post-secondary education in general – and Lethbridge College in particular – to would-be professional field officers. His colleagues note that his level of personal commitment to resource conservation is seldom matched, and that his achievements and efforts will serve to protect and protect the province’s fish and wildlife resources for years to come. 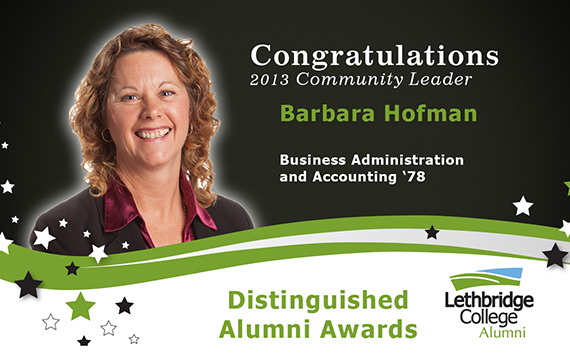 Barbara D. Hofman (Business Administration and Accounting, ’78) is the recipient of the Community Leader honour. She is recognized for showing the true spirit of community service and for demonstrating initiative, leadership and creativity. She has operated her own accounting business for more than 25 years while holding full slate of volunteer positions. She was one of the original members of the Nobleford Environmental Recreation and Parks Committee, served on the Local Advisory Council at Noble Central School, has been active in her church and is the founder of the 2009 Nobleford Parks and Recreation Society. This group has seen great success in just three years, raising funds needed to build a new park in the heart of the community that meets the needs of visitors of all ages. She has been described as a role model who inspires others by example. 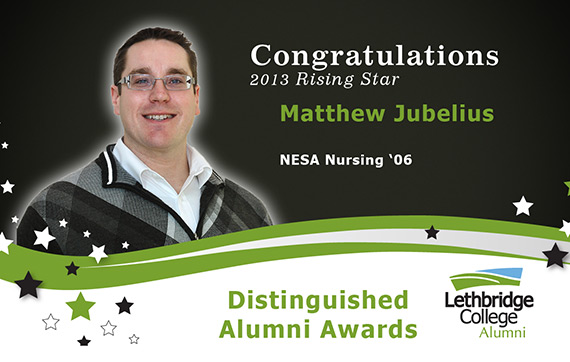 And Matthew Jubelius (NESA Nursing, ’06) is the recipient of the Rising Star award. He is a Registered Nurse with experience in cardiovascular intensive care and is currently the manager of health simulation at Medicine Hat College. Under his guidance and expertise, the simulation centre has expanded to include several health programs including the Nursing and Paramedic diploma programs. He has been praised for streamlining the way the laboratory spaces are used to make the centre more efficient for faculty and students and for setting up a simulator centre at a second site. His colleagues and supervisors note that he always shows great leadership and enthusiasm in his work, and generously shares his knowledge and insights. In addition, his colleagues point out that he genuinely cares for the students of Medicine Hat College and he helps students strive toward excellence everyday by setting an example of unparalleled excellence himself.

This year’s Distinguished Alumni recognition event is sponsored by TD Insurance Meloche Monnex and will be held on April 19 in the Garden Court Restaurant at Lethbridge College. Tickets can be purchased by contacting the office of Alumni Relations at 403-329-7220.