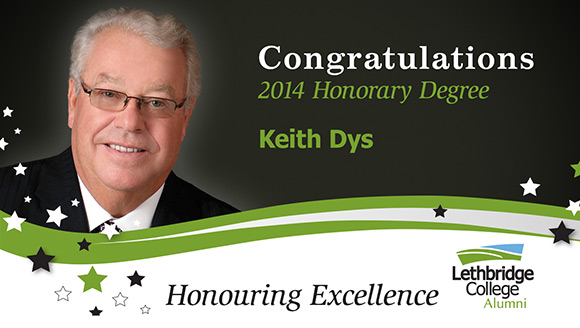 April 1, 2014 – Lethbridge College is pleased to announce Keith Dys, entrepreneur and former Lethbridge College Board of Governors chair, as the Honorary Degree recipient for its convocation ceremonies. Dys will receive a Bachelor of Applied Arts honorary degree on April 25 in the Val Matteotti Gymnasium.

Dys went straight from the McNally School outside of Lethbridge to full-time work. But that didn’t stop the founder and owner of Enercon Water Treatment Ltd. from achieving professional success in a career that took him from journeyman partsman to successful entrepreneur. And over the years, Dys says he had the chance to see and appreciate the different doors that higher education can open for people of all ages.

“It was clear to the committee that Keith has shown great loyalty and dedication to the college, especially in his many leadership roles and the various ways that he has participated and contributed over the years,” says Cullum. “Lethbridge College is where it is today because of champions like Keith. We are thankful for his level of commitment.”

The early days of Dys’ career were rocky, Dys says, and he was often broke from the time he left school until the age of 31. That’s when he was hired at CEK Manufacturing Ltd., later to become KEM Manufacturing Canada. While at the company, he became a successful salesman and established a water treatment division for the company, teaching himself the business from library books. Dys and his wife, Ellie, would go on to form Enercon Water Treatment Ltd. in January 1991, a successful business which benefitted from their hard work and planning.

Dys is a long-time supporter of many community organizations, including Lethbridge College. He first volunteered for the college’s Clayton Allan Wine Auction committee and then served as a member and later chair of the Lethbridge College Board of Governors. He has also been heavily involved in both major capital campaigns at the college, recently as the co-chair of the Possibilities are Endless campaign. Seeing the workings of the college up close showed him first hand the ways education can pay off too.  “Education is so important,” he says. “It opens so many more doors.”

Dys will be the fourteenth person to receive an honorary degree from Lethbridge College since the award was first given in 1986. He will be celebrated at the Honouring Excellence event on April 24 which will acknowledge his honorary degree along with the 2014 distinguished alumni.

“We are consistently amazed at the high caliber of nominations received each year for these awards,” says Bret Wolfer (Business Administration 2002), chair of the Distinguished Alumni Committee. “These recipients play vital roles in their respective industries, communities and Lethbridge College.”

This year’s distinguished alumni are: 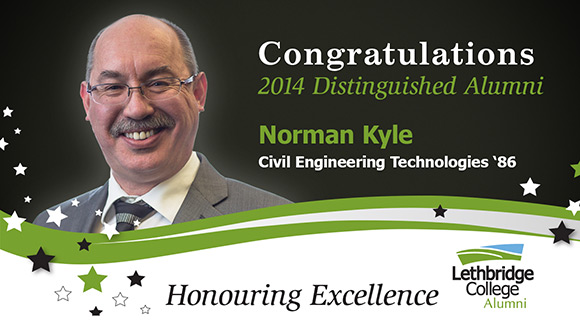 Norman Kyle, P. Tech (Eng.), P.L. Eng. (Civil Engineering 1986) has received the top award of Distinguished Alumnus. Kyle is currently the Manager of Traffic Engineering for the City of Grand Prairie and has been ranked one of the 200 most highly qualified engineering technologists out of 17,000 in the province. Kyle has achieved the highest possible recognition from the Association of Science and Engineering Technology Professionals of Alberta (ASET), in addition to receiving the highest possible recognition from the Association of Professional Engineers and Geoscientists of Alberta. He is committed to his community by serving on the city’s health and safety innovation committees, working as a volunteer in public awareness through the city’s Municipal Government Day annually, chairing the Yellowknife and Grand Prairie Chapters of ASET and serving as the Past President/2nd Vice President of ASET. In addition, he is one of the members of the Leadership Council of Technology Professionals, is a board member for the Road Safety Standing Committee with Transportation Association of Canada, and was the site coordinator for the Caribou Carnival Festival in Yellowknife. 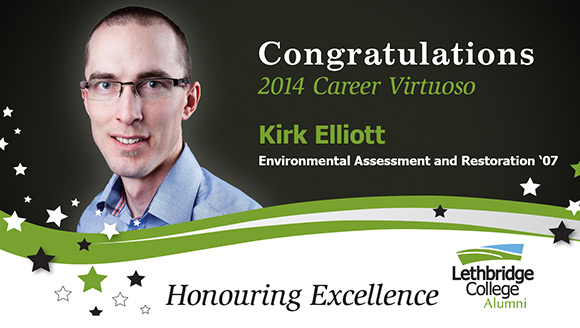 Kirk Elliott (Environmental Assessment and Restoration 2007) is this year’s Career Virtuoso recipient. After earning his diploma from Lethbridge College, Elliott began his career at Trace Associates in an entry level scientist role. Within his almost seven years at the company, he has progressed to environmental scientist and now partner (the youngest in the company’s history). Elliott is a coach and mentor for several of Trace’s junior scientists and is the senior reviewer of detailed site assessments and reclamation certificate applications in Alberta. He has advanced the profession by conducting field trials of the updated Alberta well site and associated facilities reclamation criteria. His hard work has not gone unnoticed. Elliott’s co-workers and superiors have routinely awarded him Employee of the Month, he has received international recognition winning Rookie of the Year in 2008 and the President’s Award in both 2010 and 2012. Elliott is a RTAg with the Alberta Institutes of Agrologists and leads the two largest portfolios at Trace Associates. 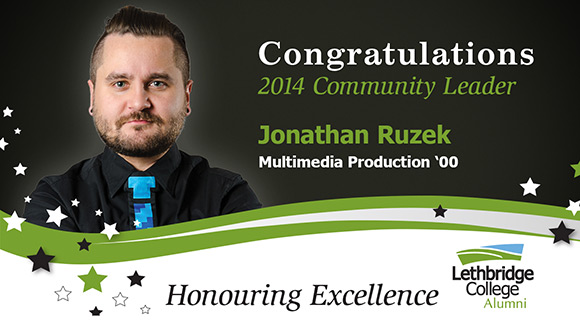 Jonathan Ruzek (Multimedia Production 2000) is the recipient of the Community Leader honour. Ruzek is recognized by nominators as an individual who goes above and beyond to serve his community. He created a blog promoting Lethbridge called Lethbian Love which explores the people, places and experiences he finds interesting or great about Lethbridge. Lethbian Love has successfully created partnerships with Chinook Country Tourist Association and Explore South West Alberta. As a full-time Multimedia Designer at Lethbridge College, Ruzek has been able to translate these skills into much of his community service. Some of Ruzek’s community service highlights include: Photographer and Facebook Coordinator of Canadian Cancer Society’s Jail-N-Bail, Movember 2013 Fundraiser in association with Lethbridge College Students’ Association, Alberta NDP Web Designer in 2012 for James Moore, Bev Mundel-Athertone and Mark Sandilands, Graphic Designer for Playgoers of Lethbridge 75th Anniversary, Organizer and Judge for Southwestern Alberta Regional Skills Canada Competition, Graphic Designer for Lethbridge Community Band Society- Mayor’s Christmas Concert , Graphic Designer for Jazzerwocky Jazz and Poetry Festival  and Communications Chair for Southern Alberta New Media Association in 2001. Ruzek has been recognized twice by CASE District VIII, winning a bronze award in 2011 for web design and again in 2014 as one of the contributors to Lethbridge College’s magazine, Wider Horizons. 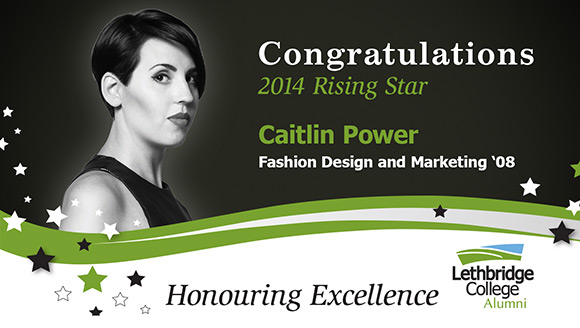 Caitlin Power (Fashion Design and Marketing 2008) is this year’s Rising Star Award recipient. She is the founder and creative director of her own label, Caitlin Power Designs, which she began immediately after graduating from the college. Caitlin Power is a Canadian high-end women’s wear label. The renowned tailoring, structure and leather details are a Caitlin Power trademark. Power has had much success and publicity in her career, placing as a finalist for the Mercedes Benz Start Up Fashion Show, headlining the Park Luxe Fashion Show, winning the Emerging Designer Contest and more. Her brand is now carried by multiple boutiques across North America. Her eye for detail and high-end designs have allowed the brand to frequent the pages of magazines such as Elle, Flare, and Fashion, as well as TV programs such as ETalk and CBC. Caitlin Power is available internationally and shows twice a year at World MasterCard Fashion Week in Toronto.