A home designed by a Lethbridge College student was voted as a finalist for a major industry award. The Emberly, designed by Interior Design Technology (IDT) student Lina Wiebe, was a finalist in the annual BILD (Building Industry and Land Development Association) Lethbridge Awards of Excellence in Housing in the $230,000-$260,000 single family category.

The Emberly was created as part of the inaugural Ashcroft Design Challenge, where teams of IDT students created competing home designs. Wiebe designed the floor plan, while Jada Kot brought it to life through 3D animation. The design was picked as the winner by a panel of judges from Ashcroft Master Builder and was built by the company in the Garry Station subdivision, with Wiebe working for Ashcroft as a paid intern.

“It was an incredible honour to have my design be nominated for the BILD awards,” says Wiebe, who is now in her second year of the IDT program. “The Emberly is the first home I have ever designed and having it come so far is a testament to the wonderful support Lethbridge College gives its students. It also reaffirms that I have made the right decision by returning to school to take Interior Design Technology.”

Friday night’s BILD Lethbridge awards ceremony honoured homebuilders in a wide variety of categories. Faculty in the IDT program say having a student-designed home judged to be among the best of the best in the city demonstrates the talent of the students in the program.

“The fact that we were even able to be a part of the competition is one of the highlights of my teaching career,” says Cherie Reitzel, Interior Design Technology instructor. “Lina had a really amazing understanding of the construction industry and a knack for detail. She tried to do some creative things that were a little different for Ashcroft.” 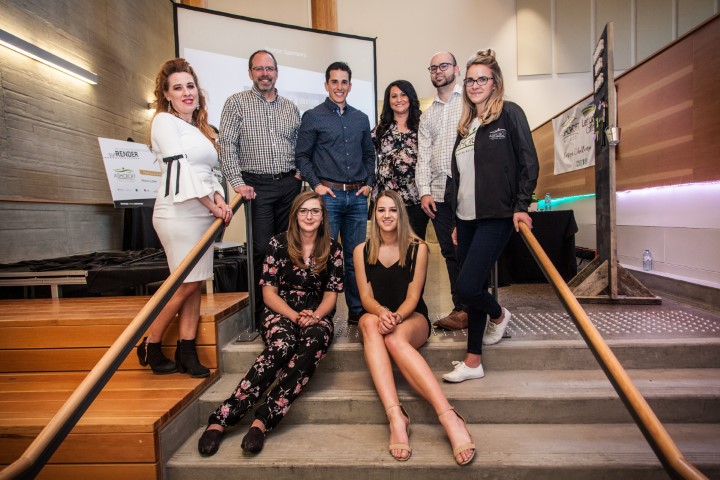 The Ashcroft Design Challenge also includes proceeds of the sale of the home being donated back to the college, and a scholarship awarded through a contest to a deserving student who otherwise wouldn’t be able to pursue post-secondary education. The collaboration with Ashcroft is an example of the industry partnerships that are vital to Lethbridge College’s success. By working closely with a company that frequently hires the college’s graduates, students gain exposure to a potential employer, while receiving industry-specific training.

“Working closely with industry ensures that our students are prepared to pursue meaningful careers once they graduate,” says Dr. Paula Burns, Lethbridge College President and CEO. “As an institution, we are very proud of Lina and Jada. Their accomplishment is a testament to their own talents, and to the work of our Interior Design Technology program to make sure our students are ready for what happens next.”

Ashcroft Master Builder is already preparing to build a second Emberly home, based off the success of the initial design. The second year of the Ashcroft Design Challenge is now underway. Students will pitch their designs to Ashcroft in April, with the winner being announced at the annual surRENDER event on April 24.