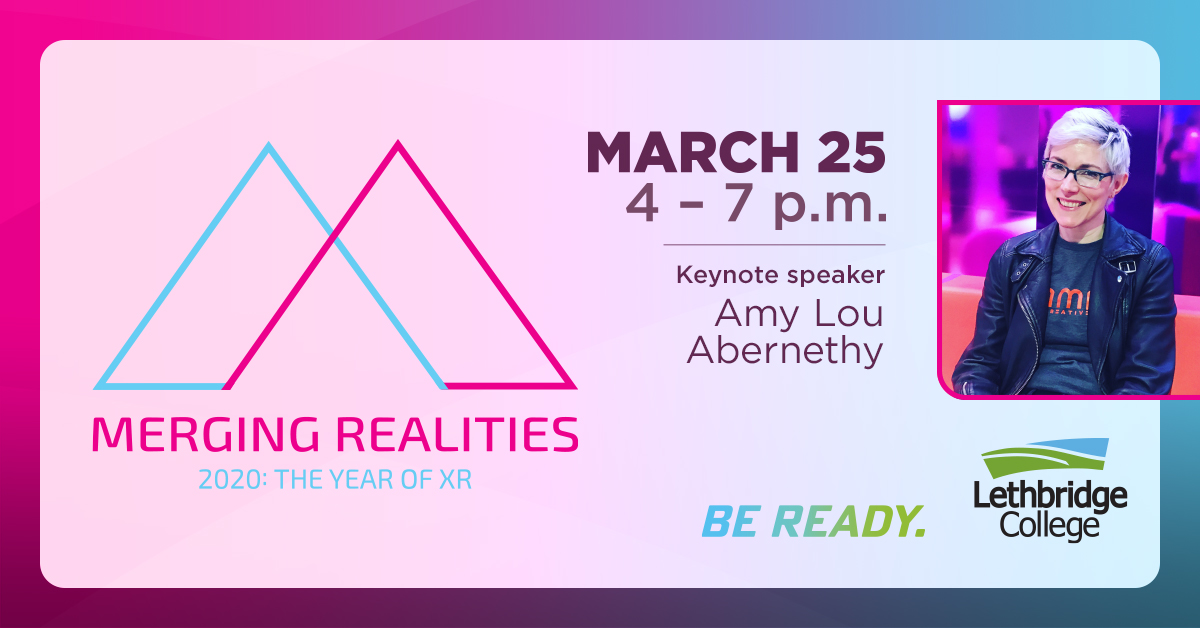 In this time of social distancing and staying home, Lethbridge College’s Merging Realities conference is focused on bringing people together – virtually. The third annual Merging Realities conference takes place on Wednesday, March 25, in a completely virtual setting and is free to all to access through virtual reality in AltspaceVR. A stream of the virtual event is also available on the Lethbridge College YouTube channel.

Launched in 2018, Merging Realities was the world’s first virtual and augmented reality (VR/AR) conference to be held entirely in virtual reality. This year’s event features a keynote speech from renowned XR storyteller and creator Amy Lou Abernethy, who is the President, creative director and chief learning strategist at AMP Creative. The conference will also have a showcase of student work from the inaugural year of Lethbridge College’s Virtual and Augmented Reality program.

“In a time where conferences are getting cancelled, we are very fortunate we can pivot to a virtual setting to bring people from all over the world together,” says Kris Hodgson-Bright, Merging Realities organizer and Lethbridge College instructor. “When there is a lot of uncertainty in the world, it’s a great opportunity to celebrate leaders in this field, as well as our first students graduating from this program.”

Lethbridge College has emerged as a leader in the VR/AR field, and launched the Virtual and Augmented Reality program in September 2019 as one of the first programs of its kind in Canada.

“The Virtual and Augmented Reality program prepares students to enter the growing industry of immersive media development,” says Tyler Heaton, Virtual and Augmented Reality instructor. “In the last year, demand for technical skill and production knowledge has increased 1,400 per cent globally as more companies and organizations see the value of immersive training and entertainment, and as more headsets reach consumers.”

Students in the one-year VR/AR certificate program have learned both technical and entrepreneurial skills in the XR (a common term for the spectrum of virtual, augmented and mixed reality experiences) field that will prepare them for careers in many industries, including education and training, entertainment and media production.

“Our students are creative, talented and adaptable,” says Heaton. “They are learning about both the technology and the medium of XR, which makes them ready and able to build the next wave of immersive and interactive content. I think the world will be impressed by what our students are producing and I am excited for them to share it during Merging Realities.”

Abernethy began her career as an educator and expanded into the world of visual storytelling and video production. She is the co-founder and creative force behind the AMP Creative agency and earned her master’s degree in learning in digital environments. Abernathy collaborates with companies to develop transformative learning experiences. AMP's VR-based empathy experiences are used by some of the world's largest global companies to raise awareness of bias in the workplace.

Merging Realities begins at 4 p.m. MDT Wednesday, with Abernathy’s keynote beginning at 4:15 p.m. A showcase of student work from the Virtual and Augmented Reality program takes place from 5 to 7 p.m.

There is no need to pre-register, and attendees can join for free online through either AltspaceVR or YouTube. More information is available on the Merging Realities website.