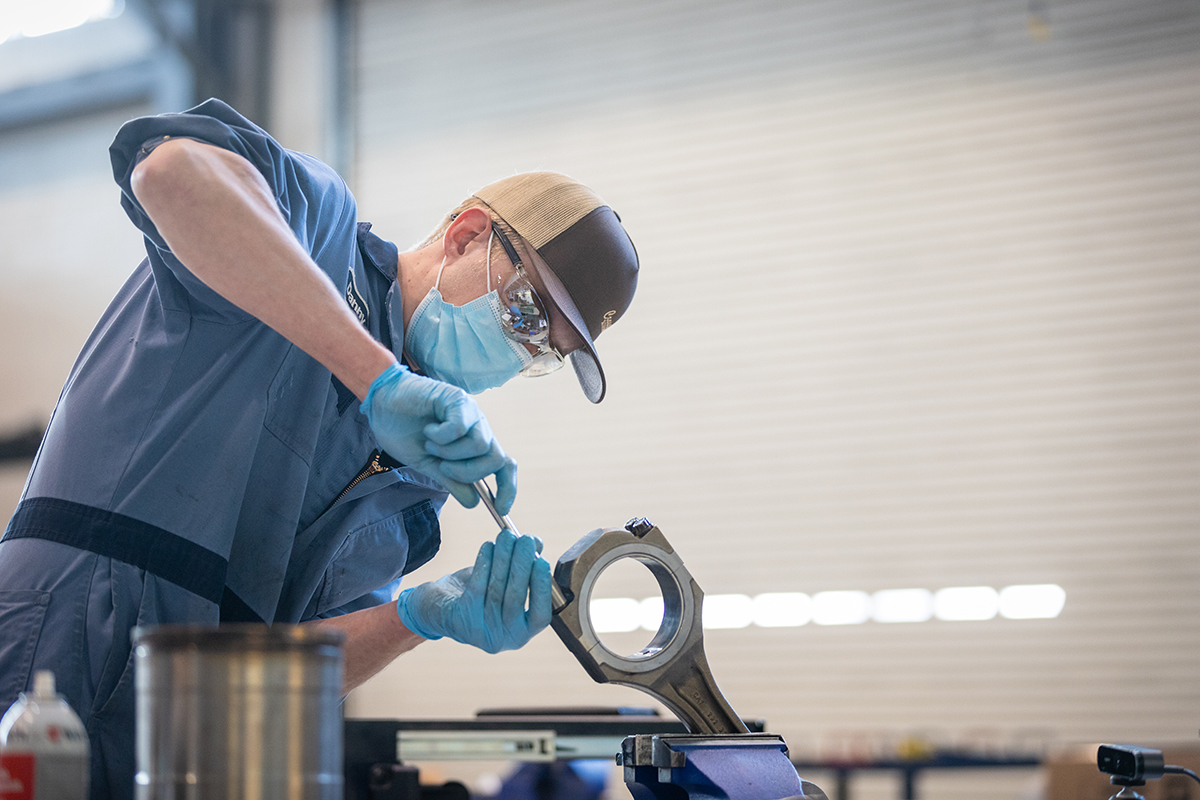 A Lethbridge College apprenticeship student has earned the title of best in Canada in his age group when it comes to Heavy Vehicle Technology. Danny Peeters was announced as the Skills Canada national gold medalist during an online awards ceremony on Tuesday afternoon.

Peeters, a 21-year-old from Brooks, Alta., is believed to be just the second Skills Canada gold medalist from Lethbridge College and the first in the Heavy Vehicle Technology category. With this year’s event held virtually due to the COVID-19 pandemic, Peeters took part in a grueling 7.5-hour test of knowledge and skills on May 27 and 28 at Lethbridge College that earned him the national championship.

“I am very happy to find out the good news,” says Peeters. “I am definitely happy that I got to participate. The competition was well thought out and very fair. I feel that I had a good time under the high stress tasks. It was a good experience that I encourage others to do.”

Peeters has completed three years of his four-year Heavy Equipment Technician Apprenticeship and already has about 7,000 hours of experience working as a heavy duty mechanic at Crosstown Truck in Brooks. He won the Skills Canada – Alberta championship in April, earning the opportunity to be one of five competitors in the national competition. This year’s Skills Canada competition was held virtually with Peeters’ work closely videoed and watched by both an in-person proctor and a judge who was connected by Zoom video conferencing.

“This is an amazing accomplishment,” says Sheldon Anderson, Dean of the Centre for Trades. “It is the result of nine years of training, as Danny competed in high school, and it shows the level of commitment both from Danny and the instructors who mentored him throughout this process, including motor mechanics instructor Walter Michel. It is great to see a competitor from one of the smaller institutions take top national honours competing against institutions with much larger budgets. We are so proud of Danny.”

Learn more about Peeters and the process of qualifying and winning both the Skills Canada – Alberta and Skills Canada gold medals by reading the story below.

June 10, 2021 - Years of experience working as a mechanic, a cool head under pressure and strategic use of time helped propel a Lethbridge College student to a provincial gold medal at Skills Canada Alberta. Now Danny Peeters is waiting for results from the Skills Canada Virtual National Competition, a gruelling 7.5-hour test of knowledge and skills held May 27 and 28.

Peeters, 21, was one of five competitors from across Canada in the Heavy Vehicle Technology category. The winner will be announced during a live, online ceremony at 4 p.m., June 15.

“I’m very happy with how it went,” Peeters says from his home in Brooks. “It was definitely hard, what I had to do, but I feel like I did well.”

Peeters has completed three of his four-year Heavy Equipment Technician Apprenticeship and already has about 7,000 hours of experience working as a heavy duty mechanic at Crosstown Truck in Brooks, Alta. Peeters has been working full-time there for four years and has been a fixture at the shop even longer – starting out sweeping floors after school at age 14.

Peeters says he’s always liked to work with his hands and to solve problems. “I rebuilt my quad (all-terrain vehicle) when I was like 13,” he says. “I bought a car with a blown engine and I swapped the engine and did all the work.” 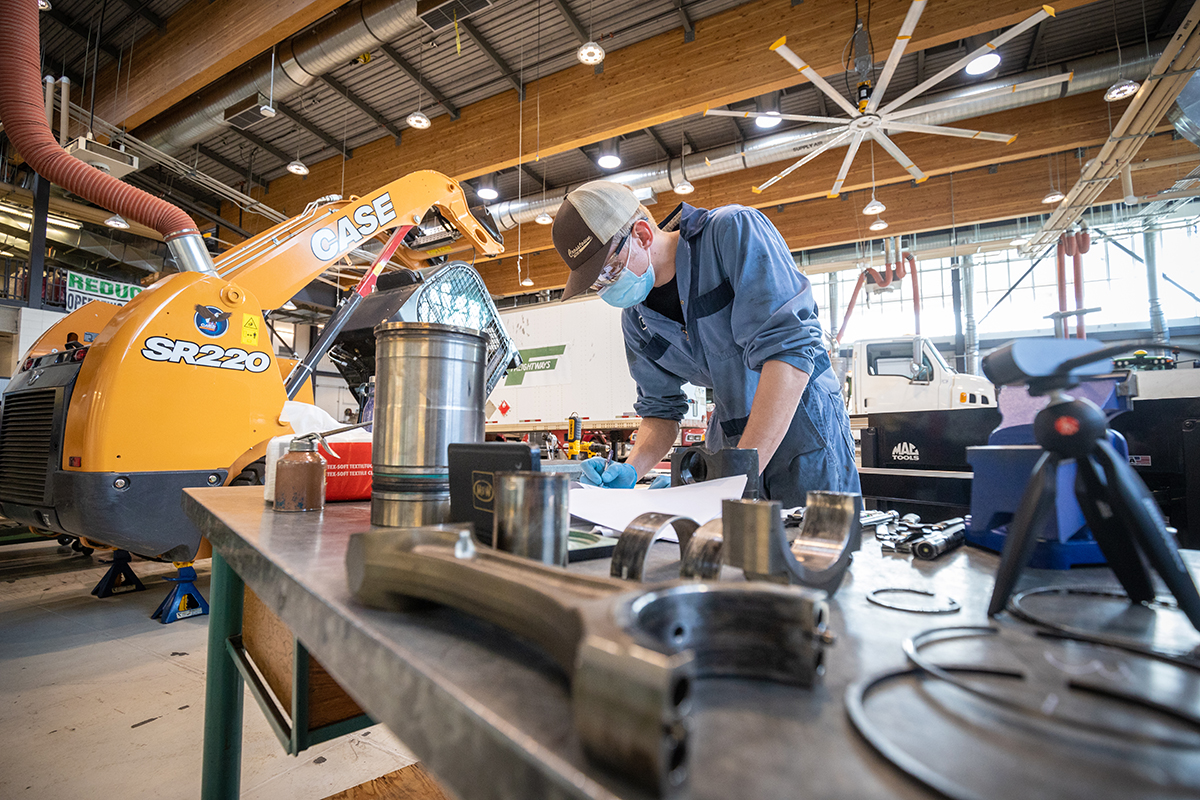 He also has experience in Skills competitions, first competing in Automotives at a regional event as a Brooks Composite High School student. He entered the Heavy Vehicle Technology category at provincial Skills in 2019. As a first-year apprentice, he finished mid-pack. He registered to compete provincially again in 2020 but the competition was cancelled due to the pandemic.

Peeters credits the Skills Canada Alberta and Skills Canada organizers with finding a way for the competitions to go on this year. At age 21, this is the last year he’ll be eligible to compete. Had it not been for COVID restrictions, the event would have been held face-to-face in Quebec City, a trip Peeters says he would have enjoyed, having never been east of Manitoba. World Skills have been postponed to 2022 in China.

“It was really fair,” he says of the virtual Skills events. “The whole committee put a lot of thought into the competition, so everyone had a good chance. They kept the competition in a box, as simple as possible, so every competitor would be using the same equipment, at whatever college or place.”

Sheldon Anderson, Dean of Lethbridge College’s Centre for Trades and long-time supporter of Skills competitions, says it was important for the competition to go on. “Skills competition is the Olympics of the skilled trades,” Anderson says. “It provides a platform for the best of the best to compete. There are age restrictions on competitors and some of them have been training and getting ready for this for quite a while.”

Anderson credits support from the college’s Audiovisual team and the tireless work of judges, led by instructor Walter Michel, with the college being able to successfully host competitors on campus for provincials and nationals. Two Lethbridge College welding students also competed in the provincial skills event. Aaron Vrieselaar and Darian Virostek finished seventh and eighth in their category.

The Heavy Vehicle Technology competition tests skills in five categories: engine systems; hydraulics; electrical and electronics; steering, braking and undercarriage; and work-place practices (focused on safety). For each category, competitors had 15 minutes to think about the task, then 75 minutes to complete the work.

“Every one of the tasks were designed so that it would be a challenge and almost impossible to complete in the time allotted,” says Michel, who handled one of two video cameras capturing Peeters’ every move at nationals. “The competitors were tested on what they had learned at school and also what they had learned at work and other life experiences.”

Experience helped Peeters know when to slow down even with the clock ticking. “I had to hack(saw) a straight block of steel to a certain dimension and cut it again to a certain dimension,” Peeters says. “Normally, you would cut it a little bit less so that you could file it, but I didn't have time to do that. The faster you go, the more crooked it gets. So, you’re better to just keep a consistent cut. I made the single cut so straight both times that I barely even had to file. I was so happy.”

“Danny’s good at what he does,” Michel says. “The reason I think he did so well is that he is very passionate about his trade.”

Michel also credited Peeters’ employer and coworkers. “They have been mentoring and teaching him every day while at work, challenging him and making him stretch.”

Peeters says the competition requires knowledge of both on-road (commercial vehicles like transport trucks) and off-road vehicles (like tractors or front-end loaders). Most students work on one or the other. Peeters’ experience is on-road, unless you count the tractors he worked on at the family farm near Duchess.

There’s more to the competition than mechanical work. The competition involves problem-solving, math – “I had to remember how to do math problems, you know, do what’s in the brackets first” – precision measurements to the one-thousandth of an inch, and the ability to draw on similar experiences to tackle something new. Peeters had to use an off-road computer diagnostic system in competition that he’d never seen before, figuring it out on the fly by relating it to other software he has used.

“You can prove yourself in competition; you can prove to yourself that you can be the best. I like to be given a task and then see how fast I can do it. It’s just my thing. I feel accomplished when I do something in good time, and I like to do it right.”

Members of the Lethbridge College audiovisual team have experienced skills competitions many times. Lethbridge College has been the host for the Southwest Regional Skills Competition, with high school students from across southern Alberta coming to campus to compete in everything from baking to cabinet-making, welding to video production. The pandemic made such large gatherings impossible this year and last.

With skills competitions going virtual this year, the AV team was instrumental in giving Lethbridge College students an opportunity to show their best work to provincial and national judges. “It was very cool that we brought the whole competition into one room,” says Tristan Tuckett, a Lethbridge College AV technician.

He says the Skills Canada Virtual National Competition required a fairly simple set up in the college’s heavy duty equipment space. One camera was set up on a tripod in front of apprentice Danny Peeters’ work bench. “He and the work bench had to be in view the whole time,” Tuckett says.

A second camera on a hand-held tripod was operated by and moved around as needed by proctor Walter Michel. A judge watching Peeters over a Zoom connection would direct Michel to get closeup video as Peeters worked. The judge could also request Michel take still images on his cell phone. “We had a microphone and Zoom set up on a computer connected to a TV in front of him,” Tuckett says. The computer was on a hard-wired internet connection for better reliability than wireless.

Peeters says he was so focused on the challenging tasks at hand that “I didn’t even worry about the camera.”

Between events, Tuckett says he’d check that the equipment was working well, and it all went smoothly from an AV standpoint. “We were happy to work with Danny and Walter,” Tuckett says. “It was a rare moment with a student, which is something we’ve really been missing.”