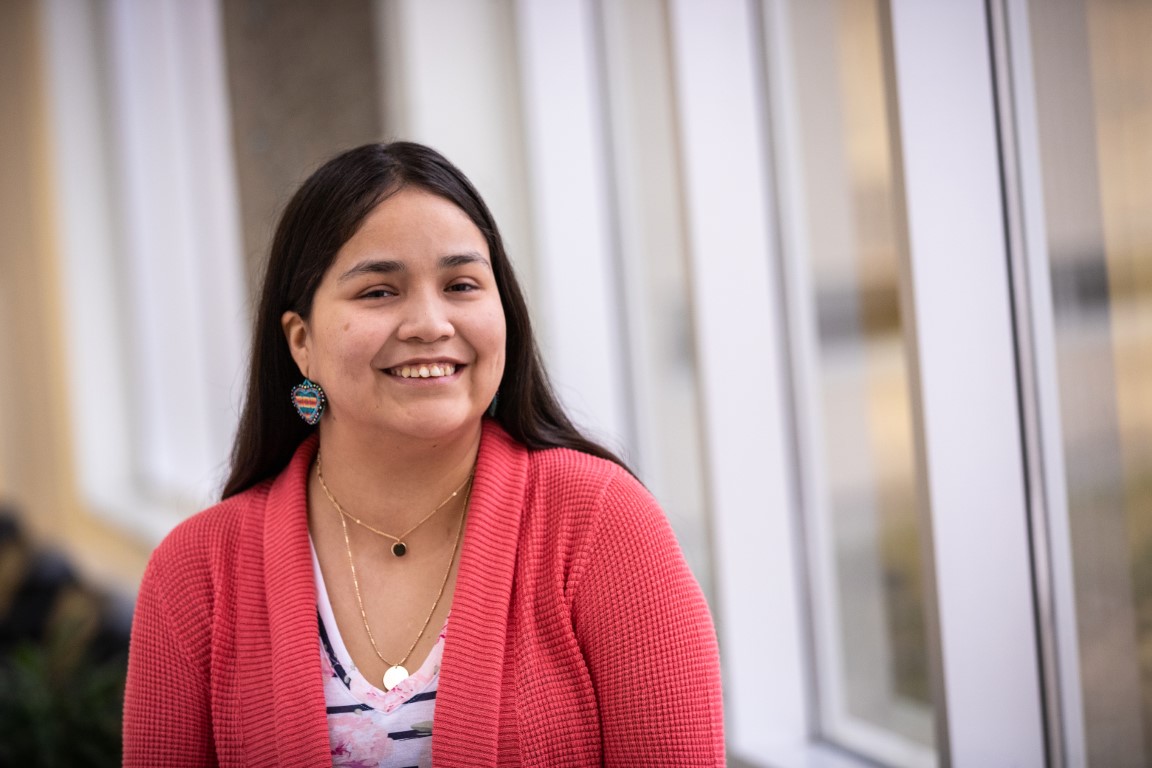 She knew something needed to change.

Tiffany Weasel Head, her husband Casey and her four children – ranging in age from two to six – were struggling to make ends meet, with no end in sight. But she had an idea. A way out. She wanted to go back to school.

“I told my husband, and he was totally supportive,” says Weasel Head. The family made sacrifices. Casey quit his job to stay home with two-year-old Cale. They used their family allowance to pay for her tuition and books. They leaned on Tiffany’s grandma and uncle when they needed gas money or groceries. But mostly – they relied on each other. At 27 years old, after 10 years away from school, Tiffany was a student again.

Now, three years later, she is graduating from Lethbridge College with a General Studies diploma, majoring in psychology and sociology.

“There are times where we really struggled,” says Weasel Head. “But I find the decision I made really brought us closer together as a family and really changed me as a person.”

***
It took a leap of faith to choose to pursue her education – but Weasel Head’s work was just beginning when she entered the doors of the college.

“It was actually really difficult,” she remembers. She had to learn to balance schoolwork with her home life – being a wife and a mother. She drove the 40 minutes from her home on the Blood Reserve to the college and back every day. And she needed a boost with some of the academic requirements.

“For the longest time, I struggled with my writing,” she says. “But the support at the college, especially the Learning Café, library and Indigenous Services team, were extremely helpful. I really felt like I had a home at the college. Everyone was so awesome; they were always willing to help, and they just went above and beyond to help me succeed.”

Weasel Head proved she was a diligent and determined student. She overcame challenges and learned to thrive in her program.

“She's inspiring to me because I've been there before,” says Marcia Black Water, Lethbridge College Indigenous student initiatives and community relations coordinator. “I came back to school as a mature student, I had kids at home and my family life, and I know how hard it is. Watching her and just wanting her to succeed and I have seen growth she's had, that's what is inspiring.” 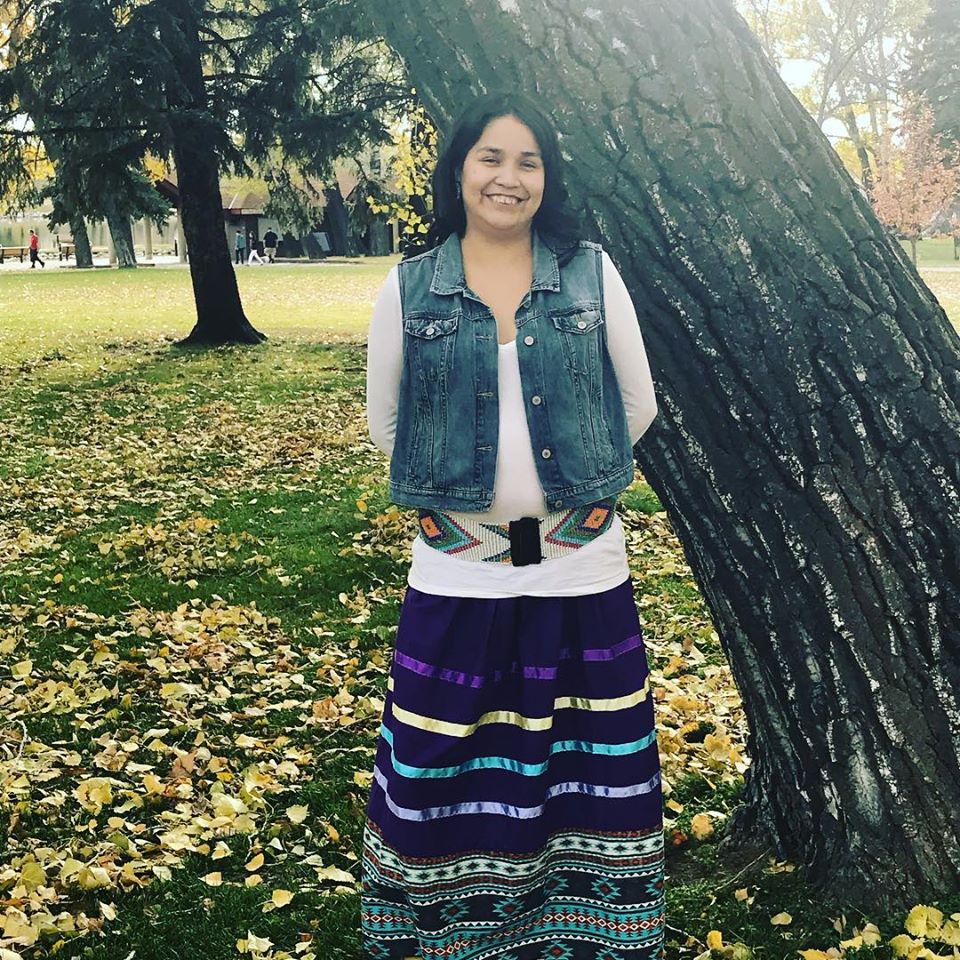 In doing so, she learned lessons that not only helped her in the classroom – but also helped her better understand her own Blackfoot culture.

“It was great to hear their stories and see how hard they work and how inspirational they are,” she says. “I would ask, ‘what does this word mean?’ or ‘how do you say this word?’ And they're so willing to help and they're just so humble. I'm really going to miss them because they gave me that cultural identity and now I’m more proud to be Indigenous because we're such strong people.”

Wanting to give back, Weasel Head joined the Indigenous Services team as a student ambassador – talking to other students and potential students about the Lethbridge College experience. “I got to know a lot of the students and they tell me they see me as a ‘big sister type,’” she laughs.

Black Water says Weasel Head never turned down a chance to volunteer and became a respected voice within the Indigenous Services team. “She was so professional and helpful in everything she did. She is a good advocate and voice for Indigenous students and a really good representative of the college.”

***
With her diploma in hand, Weasel Head has applied to the University of Lethbridge and plans to pursue a career as a clinical psychologist. “I never thought in my entire life that I would be able to be in a position to help others,” she says.

She eventually wants to open a practice at home on the Blood Reserve. Her experiences with the college’s Indigenous Services team and Kaahsinnooniks have helped to shape how she would serve those in her community.

“There's a lot of children and adults there who have suffered from trauma and all these other things that come into play,” she says. She knows there are people who suffer from drug and alcohol addictions and she believes traditional ways of knowing can help with their healing. “When I help people, I want to also tell them things like ‘smudge more and pray.’ We can be very determined people but sometimes, telling people they should just pray and smudge really does help them.

“You have to have a sense of identity and find out who you are. And if you can add your cultural side into it, it just makes for a broader picture.”

Black Water, who is also Weasel Head’s first cousin, noticed the ways Weasel Head was taking those lessons to heart and applying them to her own experiences.

“You can see those times where it had an emotional effect on her,” says Black Water. “She'd be in my office and she would share what she had learned and how it made so much sense. There were also times where there was frustration but that emotional part actually helped her understand more. And you could see that growth she could see herself in some of what she was learning and took it in a positive way.”

“Lethbridge College sure changed my life and I see things in such a different way,” she says. “It's just been a really beautiful journey.” 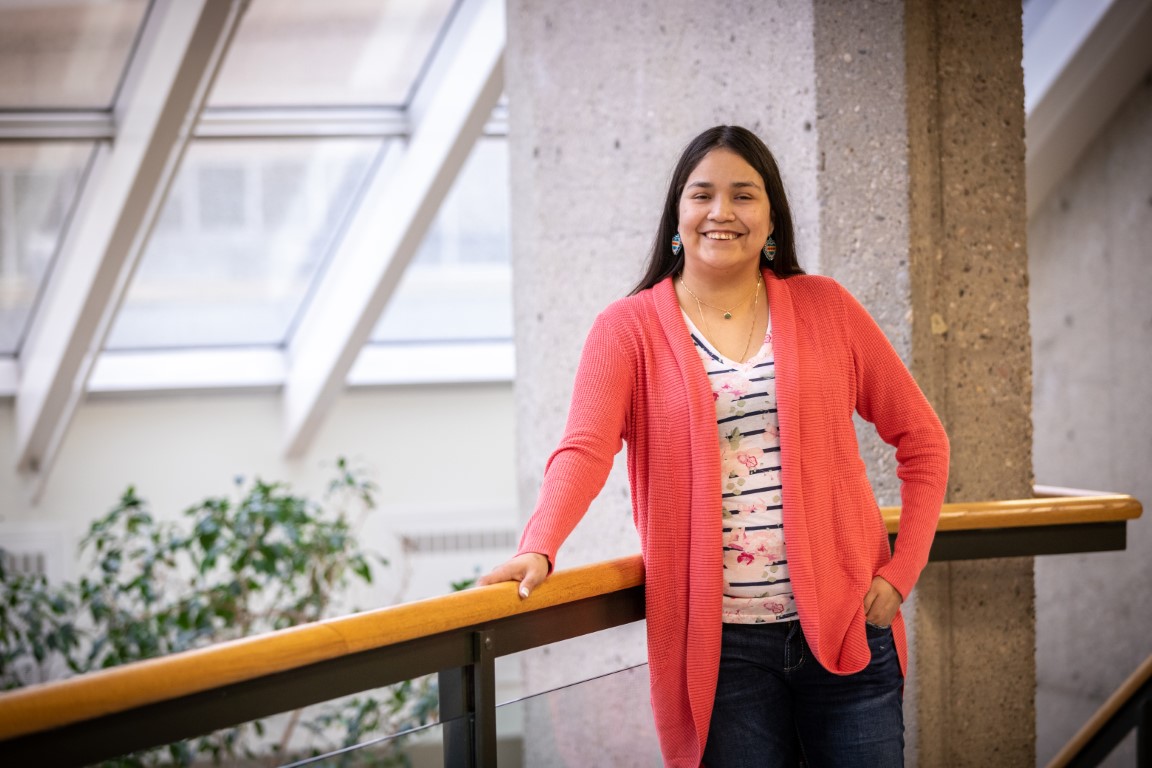 Late in her final year at Lethbridge College, Weasel Head had one more surprise waiting for her. She was asked to be the student speaker at the college’s Indigenous Honour Night.

“When I got the invitation, I cried,” she remembers. “I showed my husband and he kind of laughed and said, ‘I hope those are happy tears.’ I was like, ‘of course!’”

A journey that began three years earlier with one conversation at home was on the verge of passing a major milestone. “I never thought that other people would see me as inspirational,” she says. “It made me feel really good because I worked really hard.”

Unfortunately, Weasel Head didn’t get a chance this year to inspire the other students and supporters at Honour Night. The COVID-19 pandemic caused the cancellation of campus events - including Honour Night and Convocation. She had planned to thank her supporters – her husband and children, her extended family and the college staff who had become her family away from home. She wanted to share her own story and hope that it inspired others in the room. She wanted to help contextualize what the past three years had meant to her.

While her college experience didn’t end as she – or anyone else – expected, she is grateful for the journey and where it led her.

“As much as I wanted my kids to see me walk across the stage, I find that they see me totally different than a few years ago,” she says. “I've been very lucky, and I'm just blessed to be in the position I am today.”