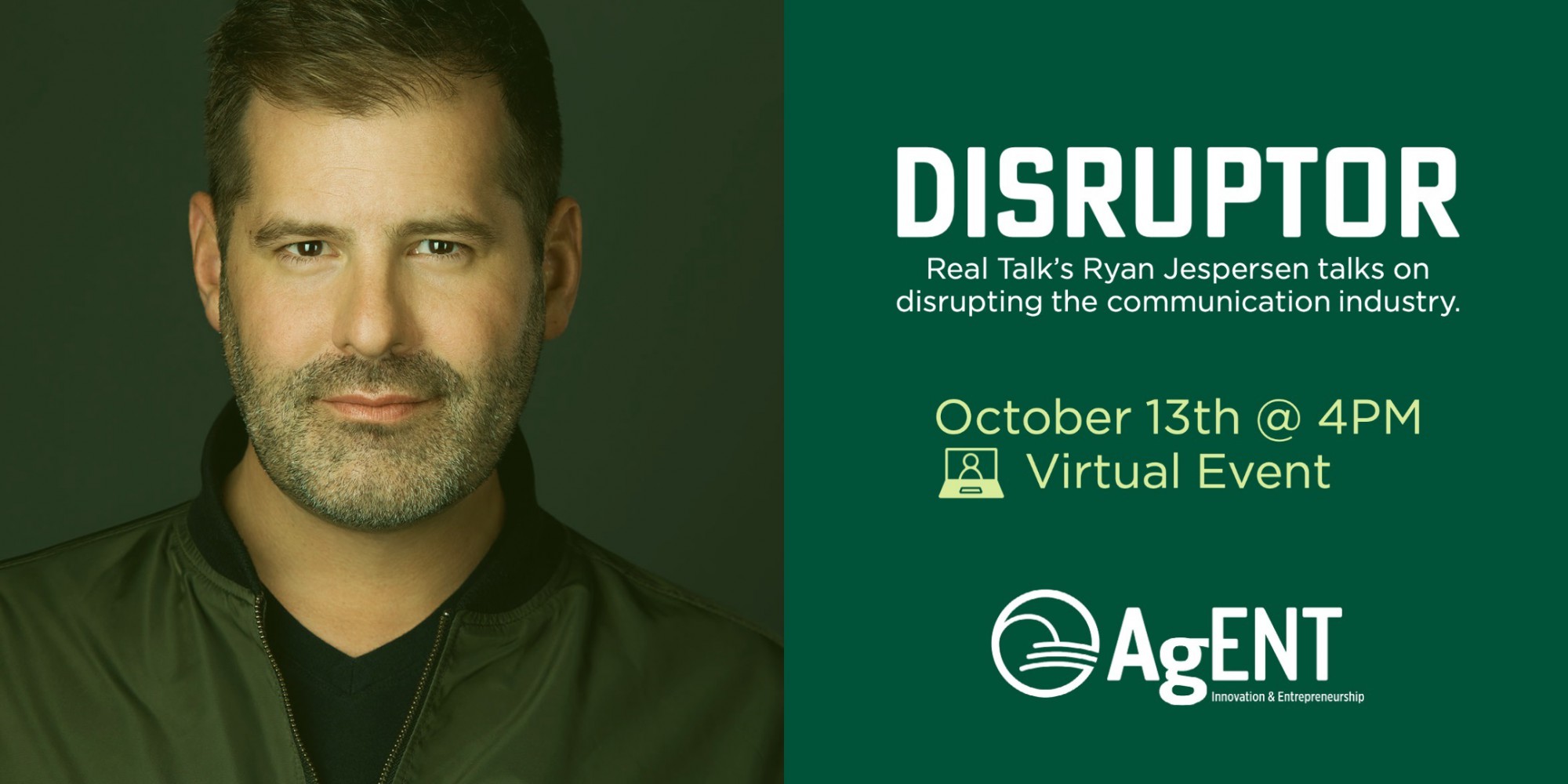 A common trait among industry leaders isn’t their ability to fit in – it’s how they find a way to stand out. Lethbridge College’s AgENT program is highlighting those who have broken new ground, led in innovation and created opportunities for themselves and others as part of the new DISRUPTOR speaker series.

Well-known Alberta media host Ryan Jespersen will be the first speaker in the DISRUPTOR series, joining students and faculty members from the AgENT program for a virtual talk and Q and A session at 4 p.m. on Wednesday, Oct. 13.

“The AgENT program’s goal is to develop an entrepreneurial mindset and encourage students to think about new and different ways to solve real-world problems,” says Megan Shapka, Associate Dean, Centre for Research, Innovation and Entrepreneurship. “Having speakers who have carved their own paths and created opportunities for themselves helps to show students what is possible as they begin their own careers. We are excited to bring in innovators and entrepreneurs who have disrupted their industry and emerged as thought leaders.”

Jespersen hosts Real Talk, one of Canada’s most downloaded current affairs podcasts. Prior to launching his independent venture, Jespersen hosted Breakfast Television on Citytv and The Ryan Jespersen Show on Edmonton radio station 630 CHED. Shifting his focus to independent media, Jespersen welcomed Prime Minister Justin Trudeau for an exclusive interview on Real Talk in April 2021, which led to a boost in popularity as Real Talk surpassed two million downloads in May. Real Talk was nominated for an Alberta Film and Television Award, while Jespersen has been named one of Alberta's 50 Most Influential People by Venture Magazine and was on Avenue Magazine's inaugural list of Edmonton’s Top 40 Under 40.

“When he was faced with a career change, Ryan didn’t fall back into his comfort zone, instead he looked at the market and trusted his expertise to try something new, which is inspiring,” says Alexi Kubeczek, Lethbridge College Development Officer and event organizer. “We want the DISRUPTOR series to show our students that there are multiple paths to success and opportunities for those who are willing to take chances. We are excited to have Ryan join us.”

Members of the public are invited to join Jespersen’s talk. Registration and more information are available online.

Future DISRUPTOR series events will focus on a wide range of topics including agriculture, agri-business, virtual and augmented reality, innovation and more.

AgENT is an extracurricular program open to all Lethbridge College students, which allows them to collaborate with fellow students, participate in workshops, listen to inspiring guest speakers and work with mentors to solve real-world challenges. Students have opportunities to pitch their ideas to experts with the chance of winning awards and seeing their ideas put into action. More information is available at lethbridgecollege.ca/agent.