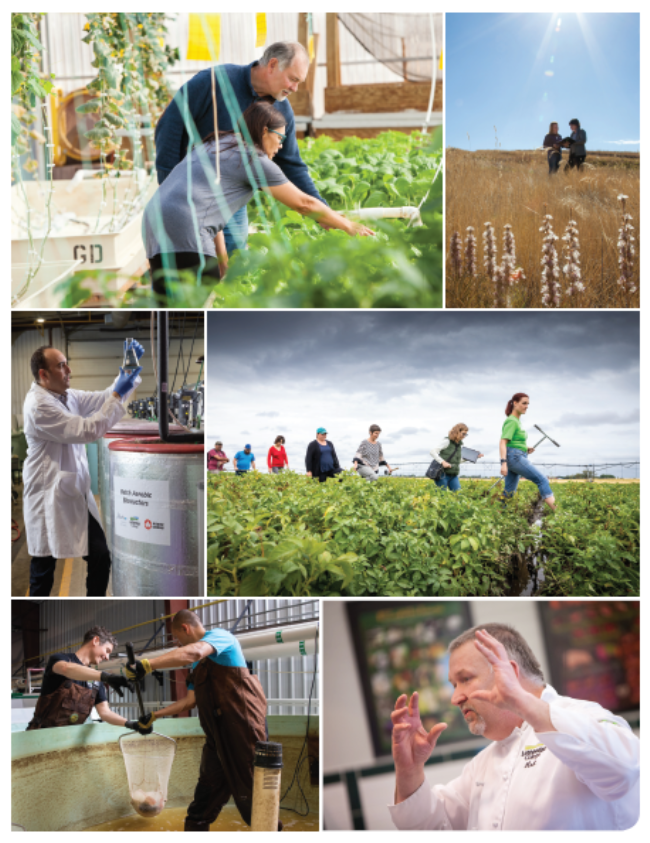 Colleges and Institutes Canada (CICan) named Lethbridge College the recipient of two national awards for excellence Tuesday, recognizing the “extraordinary contributions” of the college’s Centre for Applied Research, Innovation and Entrepreneurship (CARIE) team with a gold award and the Criminal Justice student members of the college’s LEO Club Executive Team with a bronze.

CICan’s Applied Research and Innovation Excellence Award recognizes institutions that have improved the productivity of small and medium-sized enterprises and community partners by developing new and improved products, processes and services as well as by providing students and graduates with real-world innovation experience. Lethbridge College’s CARIE team received the highest honour in this category.

“It is such an enormous honour to receive this recognition from CICan,” says Lethbridge College President and CEO Dr. Paula Burns. “For more than 30 years – and especially during these past five – the CARIE team has led the way in our mission of inspiring and facilitating learning and innovation to meet economic and social needs, bringing together community organizations, researchers and students to collaborate to solve real-world challenges with immediate practical applications. This team’s innovative, entrepreneurial work has a lasting, positive impact.”

During the past year, CARIE has actively engaged in applied research programs that include greenhouse, ag-tech, food processors, irrigation, large-scale crop producers, and virtual and augmented reality. They work closely with local businesses and industries as well as with a well-established network of associations, including the Alberta Greenhouse Growers Association, Alberta Innovates, the Regional Innovation Network of Southern Alberta, Landscape Alberta Nursery Trades Association, Potato Growers of Alberta and the Alberta Sugar Beet Growers.

“We are thrilled to be recognized by CICan with the Gold award for applied research and innovation,” says Dr. Kenny Corscadden, Lethbridge College Associate Vice President – Research, Innovation and Entrepreneurship. “This prestigious award not only recognises our CARIE team, but acknowledges our researchers, faculty and students and for the work they all do in support of local industry.”

CICan’s Student Leadership Excellence Award recognizes an individual student or team who made an exceptional contribution within their institution and within the communities they serve. The executive team of Lethbridge College’s LEO Club – Shae Guy, Brianna Fowlow, Cassie Mireau and Jaxen Tattrie – received a bronze award for their work.

“Building on a well-established tradition of giving back to the community, this year’s executive team members have gone above and beyond leading the group to make a difference in our institution and the communities we serve,” says Dr. Burns. “These are the kind of students who inspire confidence for their commitment today and for the leadership we know they will continue to show throughout their lives.”

The LEO Club at Lethbridge College was founded in 1977 by Ken Riley as part of the Lions Clubs International and it is one of the college’s oldest student clubs. The word "LEO" stands for Leadership, Experience, Opportunity and links precisely to the goals and priorities of many students in the college’s Criminal Justice - Policing program. On average, the LEO club members provide volunteer support to approximately 43 community events, and over the past two years, they have also raised money to support tuition payments for students in Sierra Leone to attend university.

Since recipients could not be recognized in person this year because of the COVID-19 pandemic, which forced the cancelation of CICan’s annual conference, the association has created an online showcase to share and celebrate their achievements.

Lethbridge College has previously won three CICan Awards of Excellence: a gold for Program Excellence for the School of Justice Studies’ competency-based education program in 2018; a bronze for Indigenous Education in 2017; and a bronze for Applied Research in 2016.

CICan is the voice of Canada’s publicly supported colleges, institutes, cegeps and polytechnics, and an international leader in education for employment with ongoing programs in over 25 countries. The awards were distributed in partnership with TD Insurance, the exclusive sponsor of CICan’s Awards of Excellence.