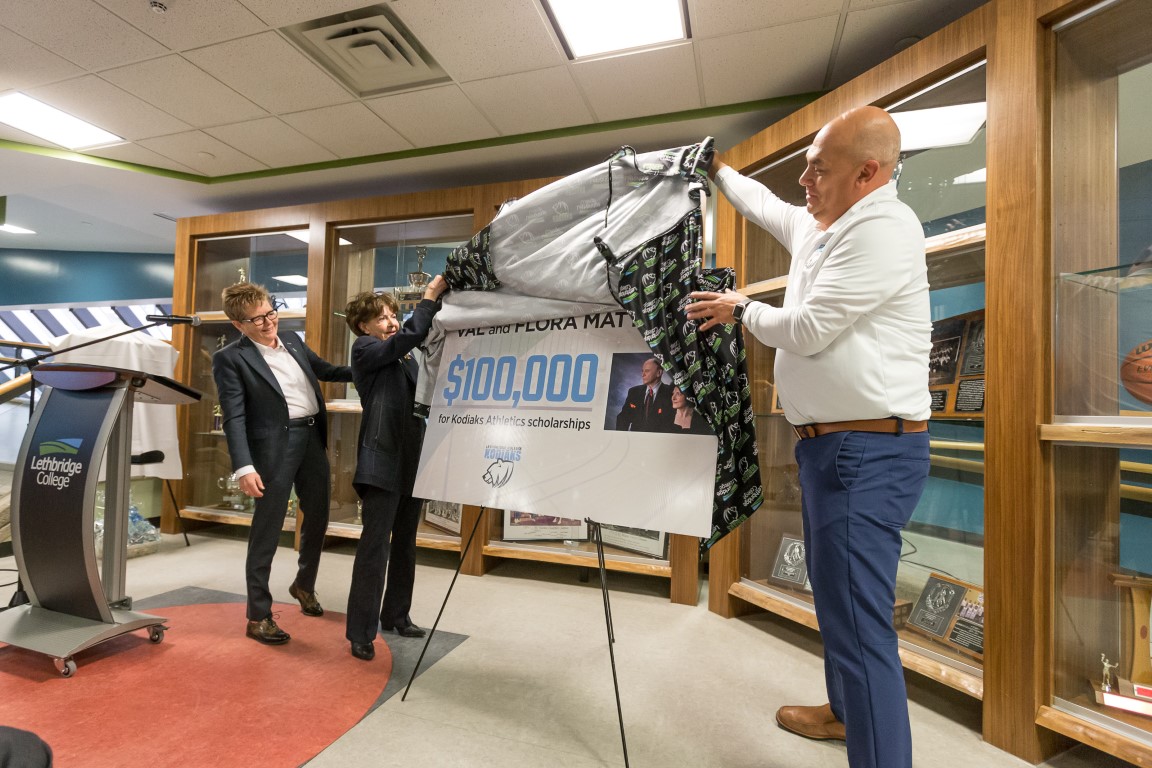 Lethbridge College Kodiaks Athletics received a game-changing $100,000 gift from long-time booster Flora Matteotti, on behalf of her late husband Val and herself, on Tuesday morning. The announcement fittingly took place just steps away from the entrance to the Val Matteotti Gymnasium – the home court for Kodiaks Athletics – as the Matteottis continued a long tradition of supporting the Kodiaks and the college.

“I find it tough to explain just how much of an impact this gift will have on the Kodiaks,” says Todd Caughlin, manager of Kodiaks Athletics. “We pride ourselves on building our programs around athletes who fit our three pillars of academic accountability, athletic excellence and community involvement, and those are values Flora and Val have always championed. This gift will help us to support more student-athletes than ever before as they pursue their educational and athletic goals.” 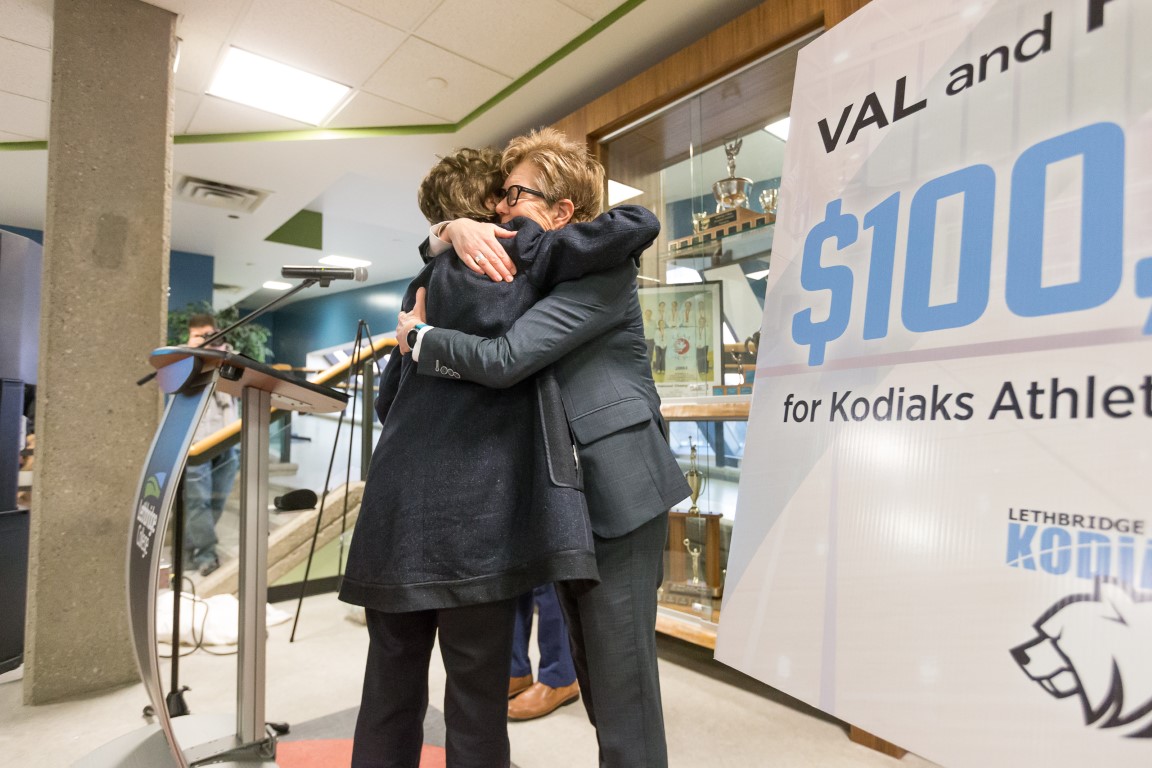 “We are so thankful for the on-going support of the Matteotti family and their commitment to the college and to the Kodiaks,” says Dr. Paula Burns, Lethbridge College President and CEO. “Our student-athletes are a shining example of what we embody at Lethbridge College, and they are ambassadors both while they’re at the college and once they enter their careers and communities. This gift will benefit them both directly and indirectly for years to come.”

The first part of the Matteottis gift supported the now-completed My Kodiaks Moment giving campaign, where all funds went directly to Kodiaks Athletics scholarships. The Matteottis have a long tradition of supporting young athletes, including multiple decades as name sponsors of the Val Matteotti Golden Hawks bantam hockey team, the first sports team sponsored by the family. 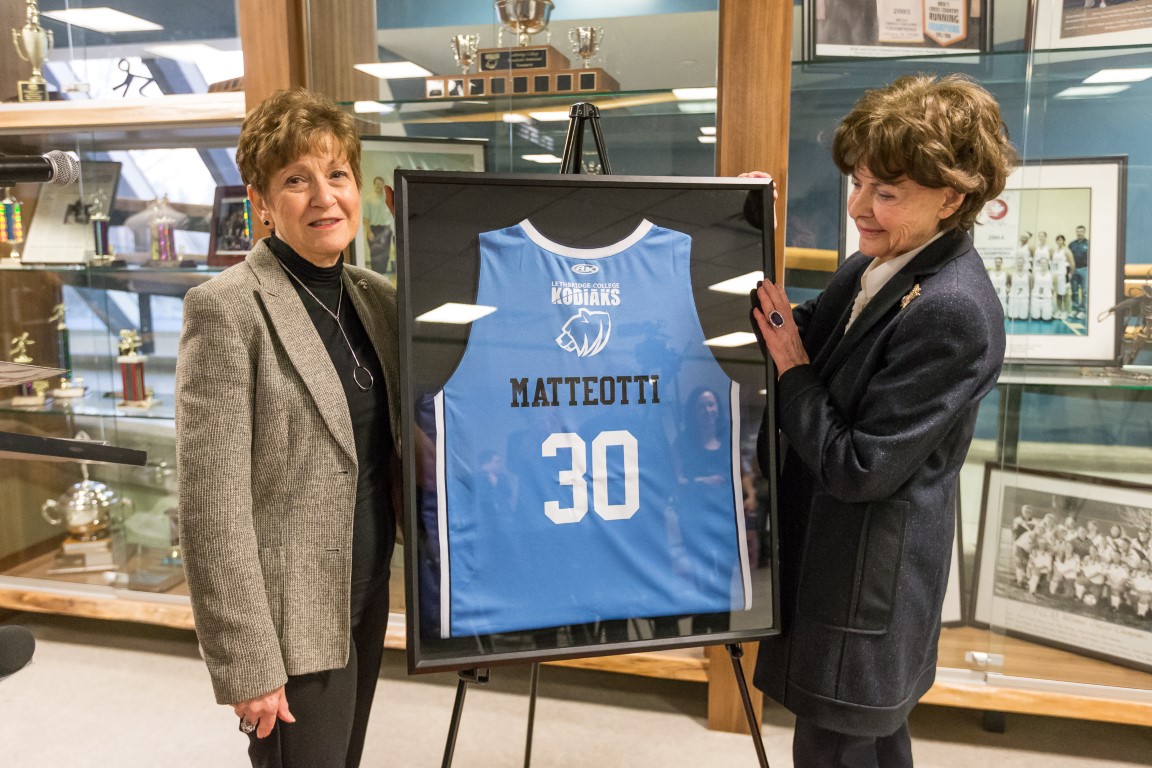 “Val always had a soft spot for sports, as he loved them but was never able to participate as a young boy because he was busy working on the family farm,” says Flora Matteotti. “So I can continue to honour Val and his passion for sports by supporting the Kodiaks and these student-athletes. It is great to continue our long-time support of the college and the Kodiaks.”

The Kodiaks also announced a successful completion of the My Kodiaks Moments giving campaign, which raised $10,119.65 from Nov. 22 to Dec. 2. Money raised – which included a gift from Flora Matteotti, donations from the inaugural Alumni Weekend on Nov. 23 and 24 and online donations – go directly to support scholarships for Kodiaks student-athletes.

Val and Flora Matteotti have been honoured with countless awards for their generous philanthropy over the years, including being named Philanthropists of the Year by the Alberta Association of Fundraising Professionals in 2001. Val passed away in 2014 at the age of 101. His wife of 66 years, Flora, continues to be a passionate supporter of a wide array of causes across southern Alberta.