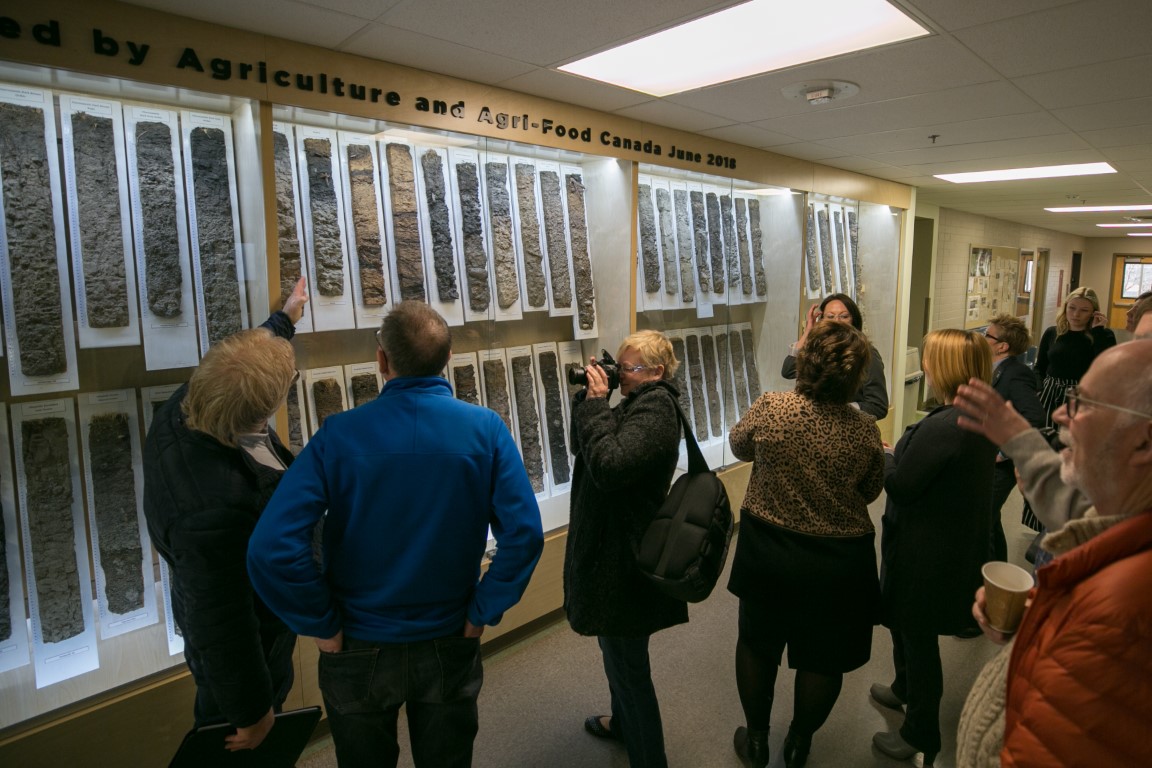 A decades-old collection that helps identify a wide variety of soil types from across western Canada now resides at Lethbridge College. Agriculture and Agri-Food Canada (AAFC) has donated 110 soil monoliths (vertical cross-sections of soil about one-metre long that show soil from a variety of regions in its natural state) to the college. The collection had previously been located at AAFC’s Lethbridge Research and Development Centre.

Lethbridge College instructors had frequently taken students on field trips to the research centre to study the collection, and both college and Agriculture and Agri-Food Canada scientists agreed that the monoliths were best served by being on campus. The collection has been appraised by Lethbridge College at $240,908, but those closest to it say it is worth much more than that as a teaching tool.

“This is an invaluable resource that allows our instructors to showcase their expertise and allows our students to learn using a tool not available at most other post-secondary institutions,” says Dr. Paula Burns, Lethbridge College President and CEO. “It was a long process to complete this transfer and it wouldn’t have happened without the passion and dedication of both our faculty members and scientists at Agriculture and Agri-Food Canada who believed in the college as a home for this collection.” 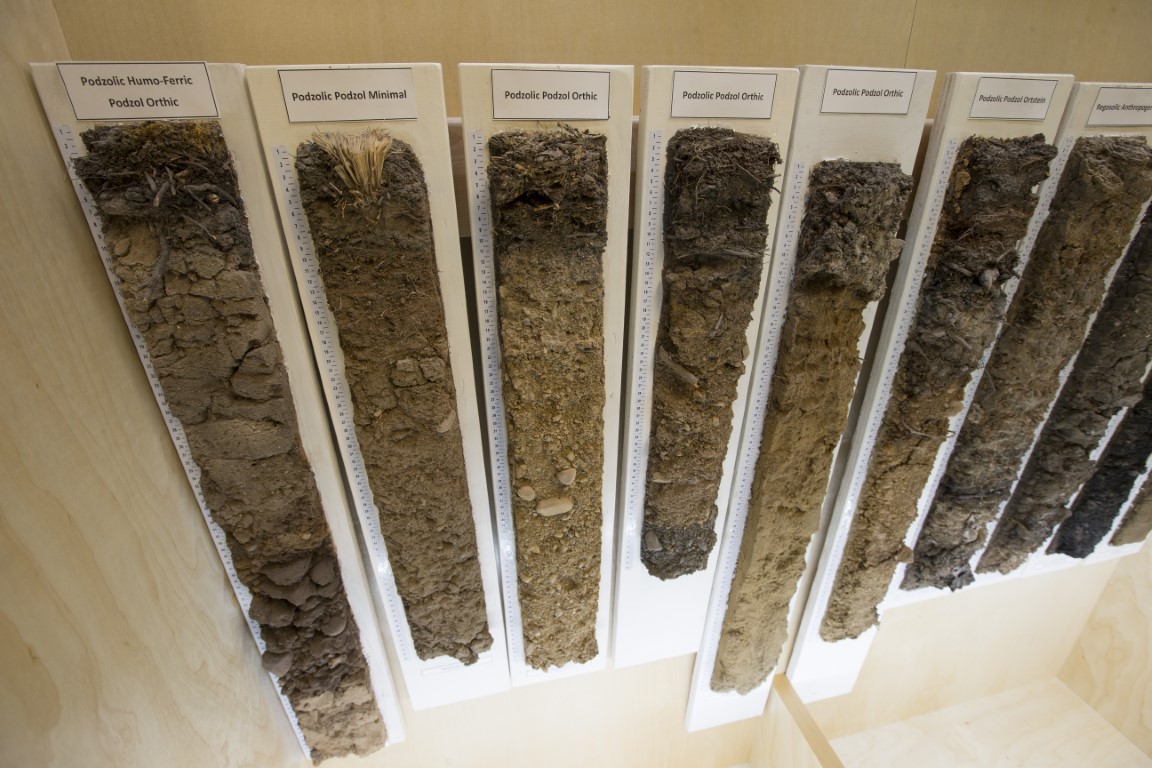 The history of the collection is something of a mystery. It’s believed that federal and provincial soil surveyors likely created the collection over a number of years in the 1950s and 1960s, but there is little historical documentation about the collection. The soil samples are largely from southern Alberta, but also include soils from elsewhere in Alberta, Saskatchewan, B.C. and the Yukon Territory.

The collection contains eight out of the 10 Orders of soil identified in the current Canadian System of Soil Classification, making it a valuable teaching resource. Because the monoliths are used for educational and not research purposes, Agriculture and Agri-Food Canada scientists saw the value in transferring the collection to the college. As a Crown asset, the collection required the approval of the federal Minister of Agriculture, Lawrence McAulay. The transfer was approved in January 2018 and the collection made its way to the college during the summer of 2018.

“It’s another example of the strong relationship between the college and Agriculture and Agri-Food Canada,” says Dr. Francois Eudes, Alberta Director of Research, Development and Technology for Agriculture and Agri-Food Canada. “Transferring the collection allows us to achieve a greater public result than just keeping it for ourselves, where it’s not as accessible to visitors. So not only is it of benefit to students, but to other individuals and Canadians who will now have easier access to it.” 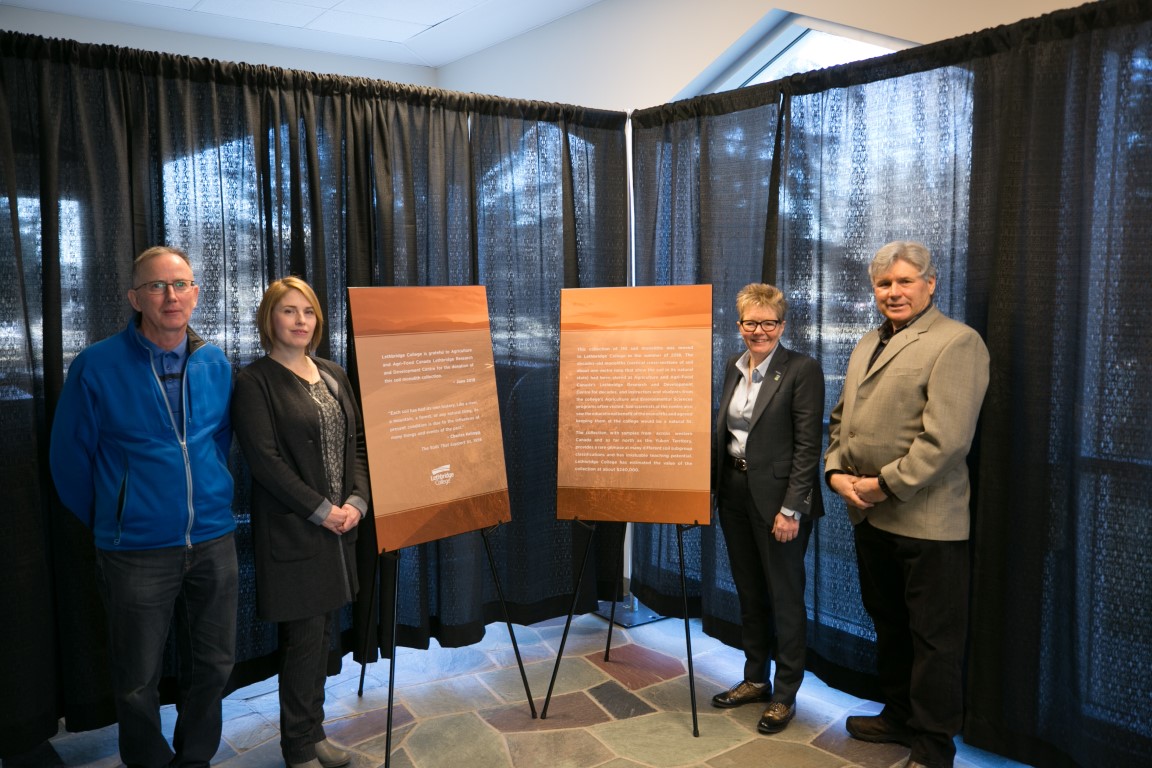 The collection, which was officially unveiled on Tuesday morning, is now located in custom-made display cabinets on the third floor of the college’s Cousins Building, just outside of the soils lab. Instructors have already used it as a resource during classes and it stands as an example of an innovative and interesting way to teach students.

“It’s priceless as a way to show our students the greater diversity of soils from a much larger region than we could visit on our own,” says Dr. Edith Olson, Lethbridge College Agriculture and Environmental Sciences instructor. “They have practicality, which ties in beautifully with the educational goals of the college, which is presenting the strong theory, the science and the physical learning environment so that we can actually help in the real world.”

The value of the collection as a teaching tool was first recognized by longtime college soils instructor Ken Perl, who would frequently take his class to the research centre and who is recognized as the former resident expert on the collection. He was involved in the initial talks to bring the monolith collection to the college and is excited to see it finally make its way to the insitution.

“It was integral to my course to show the students that soil isn’t just something you dig up and arbitrarily manipulate, it has many different classifications,” says Perl, who taught at the college from 1980 to 2015. “That is my own legacy project. After 35 years, it’s great to leave something of value at the college that students can use.”

Instructors at the college intend to continue researching the history of the monoliths and build out the history in online and digital formats.